A scintillating brotherly battle plays out in Sycamore Rouge's "Topdog/Underdog." 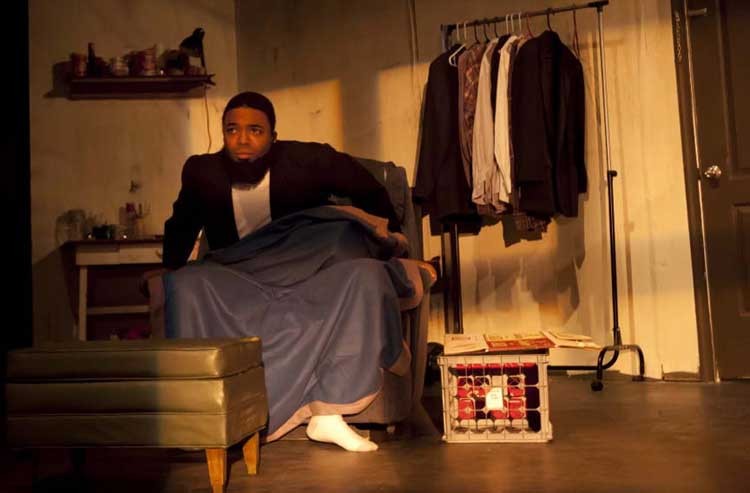 A tantalizingly easy pace characterizes the drama as it unfolds in "Topdog/Underdog," playing at Petersburg's Sycamore Rouge. You may be unsure where this two-person powerhouse production is headed at the end of Act 1; you'll be amazed by how far it's gone by the time the final curtain falls.

Director kb saine has smoothed out some of the awkward edges of Suzan-Lori Parks' celebrated but thorny script. She's also cast two of the area's most charismatic actors to portray brothers whose lives are a jumble of hustling, heartache and betrayal. Ronnie Brown plays Booth, the eager and edgier younger brother, who lives in a run-down, one-room apartment without running water. He survives on a diet of petty theft and chasing after his wayward girlfriend, Grace. He's taken in his older brother, the smoother and more substantial Lincoln (Delvin Young), who's been thrown out by his wife and makes a living dressing up in white face as Abraham Lincoln so that tourists can pretend to shoot him.

Saine downplays the surreality of Lincoln's job, focusing on the layers of dysfunction underlying the brothers' relationship. Abandoned first by their father, then by their mother, Lincoln provided for the brothers by mastering the street hustle, three-card monte. He gives up the hustle when his partner is shot, but Booth continually pushes his brother to get back in the game. The lies flow easily between the two, escalating into a final showdown that crackles with intensity.

The success of this play depends on the interplay between the two leads, and the director has chosen masterfully. Brown's playful energy and easy smile hides wounds that have festered into a quick-trigger violent streak. At key points, the actor skillfully reveals the desperate little boy still residing inside the man. Young's role is quieter but no less forceful, while Lincoln tries to embrace a 9-to-5 sensibility while battling the siren call of easy money. In the course of the evening, Young transitions impressively from sad sack to smooth operator and, in the end, can't suppress the inner con man even when facing his own brother.

The action plays out on a believably bedraggled set, designed by saine, lighted with a few significant flourishes by Karim Badwan. With its slow-building intensity and devastating crescendo, "Topdog" shows Sycamore Rouge at the top of its game. S