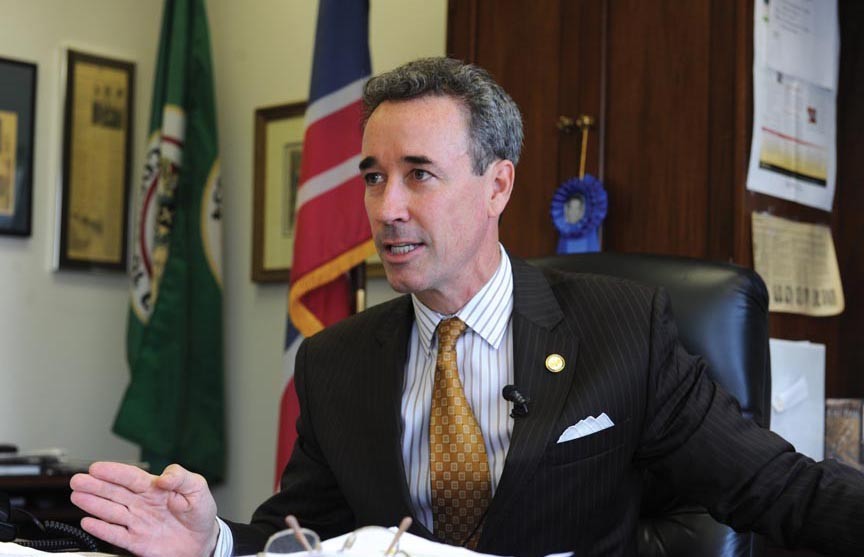 The first email blast came at 10:06 a.m.: "News Flash: Morrissey to shake up Richmond politics today." The prospect of Delegate Joe Morrissey running for state Senate has rippled through the city's black political structure for weeks, especially because it would mean that Henry Marsh, the civil rights-era lawyer turned state senator, would face Morrissey in a primary in August. Grazing nerves is Morrissey's deployment of serial emailer Paul Goldman, the indefatigable political strategist and Doug Wilder sidekick, who loves to instigate and prod the party apparatus.

The news conference is at 11 a.m. in Morrissey's office in the General Assembly building, which is mostly deserted on a sweltering June 1, with temperatures pushing into the 90s. The day's high reaches 96.

Morrissey, dressed impeccably in a brown pinstriped suit, rails against the city schools' reporting of rising SAT scores, which are inflated by numbers from the Maggie Walker Governor's School. This is troubling because the governor's school isn't run by the city, he says, and includes students from neighboring jurisdictions. But the cameras and reporters are here for something else. Rachel DePompa, an NBC-12 reporter, jokes with Morrissey, attempting to tease out the other reason everyone's here. And Marsh, a 20-year veteran of the statehouse who became the city's first black mayor in 1977, also stops by, unannounced.

Morrissey, the city's former commonwealth's attorney, known as "Fightin' Joe" in part for an infamous courthouse brawl with defense lawyer David Baugh in 1991, says his own polling shows he can give Marsh a serious run.

"It's not based on 'Can I win?' I've made that decision," Morrissey says. But he stops short of announcing.

The second email blast comes at 4:34 p.m., less than three hours before Morrissey and Marsh are scheduled to speak at the Chesterfield County Democratic Committee meeting at Bon Air Library. "News flash," it reads: "Marsh vs Morrissey is a sure thing."

The emailer, Goldman, shows up with Morrissey in a crisp, aquamarine striped shirt, untucked, and sits in the hallway while Morrissey works his magic. Goldman listens to his iPhone through white earbuds dangling down his neck.

A group of students from J. Sargeant Reynolds Community College sits in the back of the small meeting room, practicing sign-language skills. Marsh, who arrives early and snacks on ginger ale and Cheetos, finishes his speech. He comes off as meek, and is so soft-spoken the group strains to hear him. But the audience perks up when he cracks, "everybody is drinking tea, and doing strange things."

Morrissey steps to the podium, his aura filling the room. Once a gifted trial lawyer, he is tactical and on-point, clear and concise, even if his animation sometimes comes off as a bit much.

He chastises the Republicans in the House, and the inanity of those "crazy bills," guns in churches and the "outrageous" redistricting propagated by the "Rs." But just before he launches into his speech, he reaches out to Marsh.

"I was a little unsure of where to come this evening, and then I saw these Henry Marsh for Senate signs everywhere," Morrissey says, smiling widely. "Henry, is there a primary on the 23rd of August?"

The tease comes to an end less than a week later, on Monday, when Morrissey informs that he won't be running for the Senate seat, and will instead focus on his re-election campaign for the House of Delegates.