A CGI canine superstar gets in touch with his inner woof. 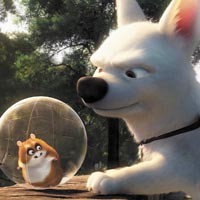 Somewhere in America, a mutt in an animal shelter is poised on the brink of White House residency and fame. This adorable punctuation mark of a momentous political season finds an echo in “Bolt,” an animated film about a stray from a shelter who ends up a star — not of network news, but of a hit series about a dog with superpowers.

And heaven knows, “Bolt” could use a bump from its real-life side story, because this offering from Disney's deservedly ballyhooed Pixar Studios, perfectly acceptable children's fare though it is, is a far cry from this summer's “WALL'E” or the other descendents of “Toy Story” that have made Pixar's reputation.

Appropriately enough, the theme of “Bolt” is a descent from the exalted and extraordinary to the homely and normal. Bolt (voiced by John Travolta) is raised from obscurity when adopted by child-star-to-be Penny, voiced by teen phenomenon Miley Cyrus, herself the star of Disney's immensely popular “Hannah Montana.”

With the help of some rather cumbersome exposition, we learn that Bolt lives in a “Truman Show”-like bubble. So that he'll turn in an authentic performance, he's been made to believe he really can melt steel with his eyes, leap unscathed through the spinning blades of helicopters, and reduce city blocks to rubble with his super bark, all in his efforts to save the perpetually menaced Penny from the clutches of the evil Dr. Calico (Malcolm McDowell).

So when a series of extraordinary chances lands Bolt adrift and alone in New York City, he's astonished to find that his powers have vanished, and that even the streetwise pigeons he encounters know more about getting along in the world than he. In desperation, he joins forces with Mittens (Susie Essman), a ragged alley cat whose sharp tongue hides an inevitably wounded heart. They set off on a cross-country trek back to Hollywood and Penny, and are joined on the way by Rhino (Mark Walton), a heroic nerd of a hamster who is also Bolt's biggest fan.

The meandering middle of the movie is taken up with a journey through a hazily conceived American heartland, composed mostly, it seems, of family farms crisscrossed by speeding freight trains and inhabited by fat, slow-witted human beings — leftovers from “WALL'E,” perhaps.

There are moments of charm, to be sure, as Bolt comes to accept, and then revel in, his everyday doggy life, but if there's anything other than a pleasant, everyday quality in this movie, it must lie buried in the 3-D version, which, sadly, was not available for screening. (PG) 95 min. HHHII S