Does the Moon House Need Saving? 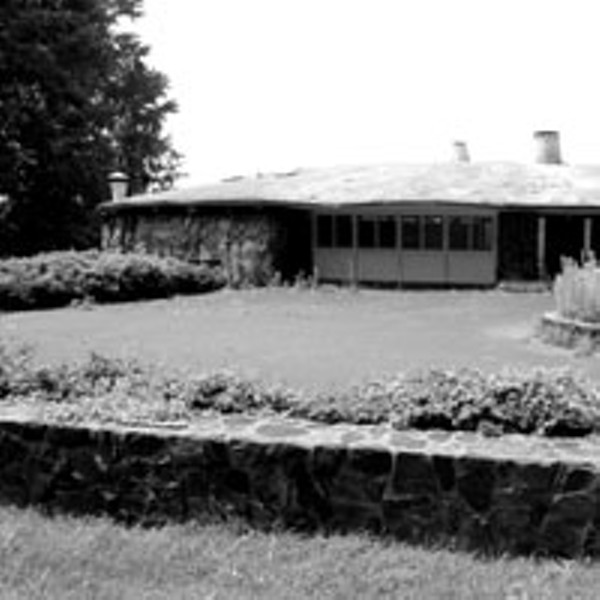 But now there's an underground campaign to save the moon house from possible demolition. And Jamgochian, when informed of the cause, feels at least slightly vindicated.

It's not clear yet what will happen to the local landmark on Cherokee Road, but it sits empty and vandalized, its windows broken and "No Trespassing" signs fastened to trees along the curving drive. The place is now owned by former state delegate Alexander McMurtrie and his son, Bullets burger tycoon Daniel. They've avoided commenting on the house to Style, other than to acknowledge that they own the property.

Neighbors in million-dollar-plus estates nearby have long been accustomed to the curiosity-seekers who drive past, gawking at the house with its white marble chip roof and its crunched, copper sidewalls.

"From the sky it looks like the moon has landed," Jamgochian says of the project, built for used-car dealer Dapper Dan in 1965. "He said he wanted me to design a house that was out of this world, and I drew a moon for the roof and everything else just fell under that. It was pretty simple." Inside, low ceilings and futuristic details like a black-rock bar and glass walls have the palpable swing of a James Bond hideaway, but one that is now in serious need of attention.

A local architect who keeps her ear to the underground says the place has been intentionally neglected and is likely to be torn down, and she has circulated e-mails to bring attention to the possibility. With the property's prominent perch on a riverfront bluff, it could command far more money with a new mansion than as a restored, quirky moon house built for a man who loved to gamble and win.

Jamgochian is bemused, but at 80 years old he has other interests now. "It fixed me, and everybody was afraid to hire me," he says. "I am an attractive nuisance. These buildings anywhere else wouldn't have gotten the attention they got here. If I did them in California, they'd just say, 'There's another one.' Here, hair raised, eyebrows moved, and people said, 'What's that?!'" — Deveron Timberlake