“Seven Pounds” is more than generous with its holiday-timed charity nonsense. 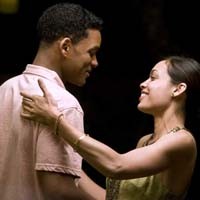 This may be shaping up as the Year Will Smith Stumbled. First came his underappreciated “Hancock,” a bracingly jagged entry in this summer's cavalcade of box-office superheroes, and now “Seven Pounds” appears, a movie that could have inspired the late screenwriter Irving Brecher's immortal quip, “That picture wasn't released; it escaped.”

A star without Smith's tremendous reserves of professional capital would doubtless be filled with terror at the prospect of opening night, but in this hopeful time of year, Smith can probably rely on Americans with forgiving hearts and short attention spans to forget this wretched imposition on the holiday season.

The utter incomprehensibility of the trailer for “Seven Pounds” has already incited a good deal of commentary on the Web. (Try Googling “seven pounds trailer what the heck,” or some variant thereof.) All we really learn from it about Smith's Ben Thomas is his penchant for yelling into phones and running at top speed through nocturnal downpours.

Those lured into the theater by the prospect of any speedy clarification will be in for a disappointment. Almost until the very end, the script is riddled with mysterious pronouns that are supposed to keep us on the edge of our seats, or at least from leaving them altogether. But after an hour of hearing characters insist on the need to talk about “this,” or order people to do “what” they promised, or ask whether “something” has been taken, our impatience with this film's perverse withholding of information — and antecedents — smothers whatever initial curiosity we might have had.

One thing's for sure: Smith's Ben Thomas is sad, sad, sad. Once, he shared glorious beachfront property with his beautiful wife. Now he's holed up in a dumpy motel with only a jellyfish for company. Once, he designed rockets. Now he doesn't. Instead, he makes mean prank calls to a blind customer service rep (Woody Harrelson) or poses as an IRS auditor with a penchant for getting all up in the business of sick people behind in their taxes. Why? To test their ethical mettle. Ben, a good if rather surly Samaritan, must make sure you are worthy of his charity.

From time to time we foolishly suppose we're going to get some hard facts. Speaking of one hard-luck case, Ben portentously intones, “It is within my power to drastically change” — his 1040? His Social Security number? His bank balance? No … “his circumstances.”

In one early scene, Ben appears to be trawling through IRS databases looking for hotties with pouty lips and big delinquencies. He settles on Emily (Rosario Dawson), a young beauty with end-stage congestive heart failure. At first he pulls his usual off-putting investigative stunts, but slowly he and the gorgeous invalid draw closer. Inevitably, they end up in bed and, as they say in Hollywood, proceed to drastically change one another's circumstances.

Although Smith is not a man to have parts forced upon him, and so bears some of the blame for the existence of this tripey offering, one can't help feeling for him as he plows manfully through the absurdities thrown his way by screenwriter Grant Nieporte. A script that forbids characters from revealing their motives or even mentioning the life-altering events of their recent past poses terrible problems for an actor, even one of Smith's nimbleness. Ben is so far outside the realm of normal human interaction that Smith is reduced to random smile-flashing and brow-furrowing.

The other actors whose characters are in on the big secret seem simply desperate. Barry Pepper, as the doctor who must do “what” he promised, and Michael Ealy, as the brother aching to talk about “this,” flail about on the screen helplessly, like captives forbidden to utter the words that will free them.

Needless to say, when, in a flood of nonsense, the whats, thises, and somethings are swept into the light of day, they come too late to offer much in the way of either pleasure or surprise. This movie purports to be about generosity, but it operates on an emotional level so crude that the sacrificial act at its heart appears not only kitschy, but also repellent — not to mention icky. (PG-13) 113 min. HIIII S