by Ned Oliver and Scott Bass 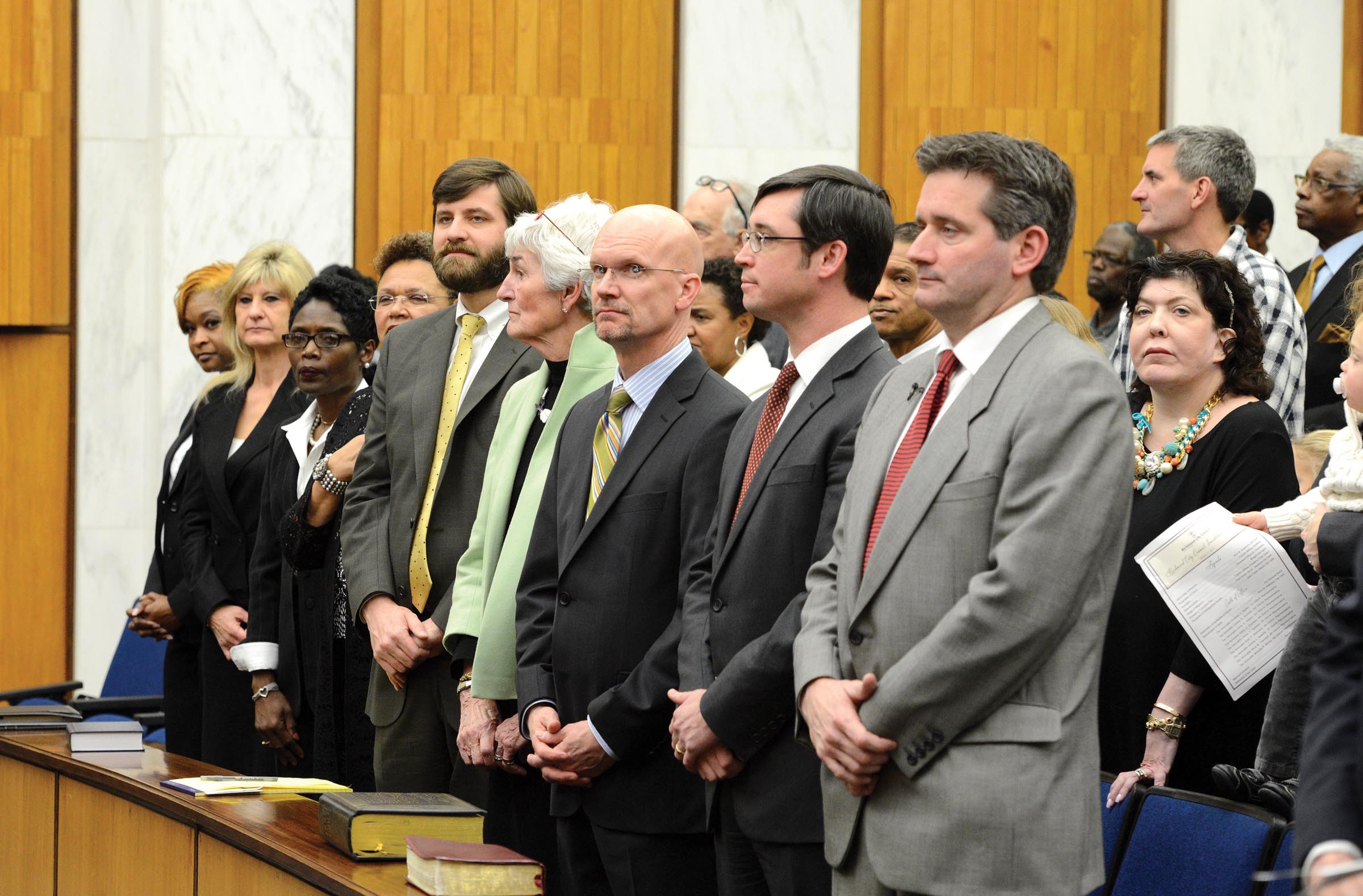 Richmond Mayor Dwight Jones and newly elected City Council President Charles Samuels share a vision for the next four years. It's nauseatingly bright.
Jones sums things up at last week's swearing-in ceremony for council members when he invokes "Wonder Pets," a children's television program that features a cartoon guinea pig, duck and turtle who ride around in a flying magic boat to rescue baby animals using teamwork. Jones says it's a favorite of his grandchildren.

The motto of the show's main characters goes thusly, Jones says: "We're not too big, we're not too tough, but when we work together, we've got the right stuff."

The audience responds with polite laughter, but Jones is driving at a serious point: He no longer has any vocal opponents on City Council. From here, it's clear sailing on a magic, flying boat for the Jones administration.

Samuels, while giving a teary speech accepting his election as council president, confirms as much when he looks at he mayor, smiles, and promises no more bickering with the administration.

"It wasn't too long ago that there was a lot of drama at City Hall," Samuels says. "People would seriously say that watching City Hall on TV was better than any sitcom out there. My goal is for people not to be bored with these meetings, but to see them for what they are: Business meetings where we as your elected officials try to do the people's work. That will be my goal as president for the next two years."

The merits of placid political discourse are debatable. While warm fuzzies and kiddie-show platitudes ring in the new year, is City Council about to enter a new era of insignificance? The mayor's ability to sweep out his opponents and bring in new allies on council and the School Board — his former deputy chief of staff, Jeffrey Bourne, is the board's new chairman — has some people concerned that he'll govern the next four years with no resistance.

"I think Richmond is in a sad state of existence right now," says a former mayor and city councilman, Roy West. "This mayor doesn't know what he is doing because he is so power drunk. … And it's sad that this City Council doesn't have the backbone to check the mayor." West specifically notes Jones' power play over the Richmond Metropolitan Authority, in which the city's majority delegation to that board overthrew the longtime chairman from Henrico County last year.

The move is almost certain to lead to legislation in the General Assembly that will equalize the board and give the suburban counties more representation. The authority manages one of the city's most valuable assets, the Downtown Expressway system. No one on City Council protested the move.

"I just let them wallow in their incompetence and suffer accordingly," West says.

There's also worry that council is increasingly unrepresentative of the community at large. In a majority black city, whites outnumber blacks 3-to-1 on council. And for the first time in nearly 50 years, there's no black male serving on the city's legislative body.

"I'm not just seeing that as a negative regarding the black community, but the entire community," says Raymond Boone, editor and publisher of the Richmond Free Press. "I believe in the marketplace of ideas, and the more perspectives that you have and diversity of viewpoints, the better society can be served."

Boone is being polite. Sa'ad El-Amin, who served on City Council from 1998 to 2003, says the loss of black male representation is a tragedy. Traditionally, strong, vocal black males have been a hallmark of City Council – including such recent luminaries as Chuck Richardson, Henry Marsh and West. Fifty years previously it was the late civil rights attorney Oliver Hill and 50 years before him it was John Mitchell Jr., the firebrand editor of the Richmond Planet.

"The one thing that white people fear more than anything else is a strong, black male," El-Amin says. "They come out of a different era."

Former governor and Richmond Mayor L. Douglas Wilder is case in point. The confrontational Wilder bludgeoned his way back to power as the city's first popularly elected mayor under the city's new form of government in 2005. The aftershocks are still being felt at City Hall.

"When they talk about Doug Wilder they whisper about him as if he's in the room with them," El-Amin says, which is especially true in the white business community. "They didn't like the fact of having to go toe-to-toe with him, because that's not the Richmond way."

With Wilder's exit from politics in 2008, Mayor Jones and City Council vowed to be more collegial. During Jones' first two years in office, there was little resistance from council. But in the last two years, Tyler and Jewell emerged as vocal opponents of the mayor. Jewell, the lone black male on council, was prone to righteous outbursts of disapproval, and could be especially effective.

With Jewell gone, will this council become even more complacent?

King Salim Khalfani, state director of the National Association for the Advancement of Colored People, says he isn't giving up hope — yet. "The thing is we all like peace, but those of us who are out here advocating for people who can't advocate for themselves" don't have that option, Khalfani says. "I expect confrontation. You must participate, agitate."

It might take time. At last week's swearing-in, the new City Council seemed intent on making prognostications about working together, becoming cuddly friends of the mayor. Parker Agelasto, who replaced Jewell in the 5th District, says he wants to create a vision for his district and "unite our communities."

Jon Baliles, who replaced Tyler in the 1st District, says he'll spend some time working through a long list of priorities for his district. But it's too early to say exactly what will be first on the list.

"Education is critical, but also ... very important is economic development and getting good jobs in the city for people to work hard and make a good living," Baliles says, clutching a box with a new, government-issue iPhone. "We'll take a look at everything." S