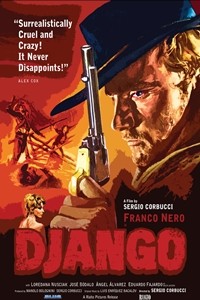 A mysterious man trudges into town dragging a mud-stained coffin behind him. This man is Django. After he saves Maria from certain death, Django finds himself in the middle of a war between Mexican revolutionaries and a band of sadistic racists led by the fanatical Major Jackson. In the face of overwhelming odds, Django has a plan: to exact revenge while pitting enemy against enemy. Featuring the addictively catchy title song performed by Rocky Roberts, "DJANGO" made an international star of Franco Nero, and along with Leone's Man With No Name trilogy, established the Spaghetti Western as an internationally popular genre.

Sorry there are no upcoming showtimes for Django (1966)