The battle over the Richmond Ambulance Authority: Who controls the city's boards and commissions? 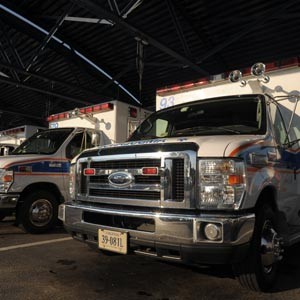 When it comes to local government, the Richmond Ambulance Authority is a diamond in the bureaucratic rough.

During its 19-year existence the authority has emerged as a star among municipal ambulance operations, drawing delegations from as far away as Turkmenistan to study its lightning-fast response times. In 2009, more than 90 percent of the ambulance arrivals to life-threatening emergencies occurred in fewer than nine minutes. The authority also conducts prolific research on new techniques in pre-hospital care. It pioneered the use of mapping technology to place vehicles based on historic call volume and, more recently, deployed a cooling cocktail of cold saline injections, resuscitation drugs and chest compressions to help nearly double the city's cardiac-arrest survival rate.

With such plaudits, a jolt to the system might be the last thing on the minds of the City Council-appointed board that oversees the ambulance authority. But board member Terone B. Green, former Republican and erstwhile city politician, sees a need for new leadership. At the authority's annual meeting May 26, Green -- a past General Assembly candidate and supporter of Mayor Dwight C. Jones -- formally challenged board chairman Joseph P. McMenamin, both a physician and a lawyer now a partner with the firm McGuireWoods.

The political battle touches off a larger debate about the power and role of city-appointed boards and commissions, almost all of which are appointed by City Council. The commissions receive millions of dollars from the city while operating under varying levels of enabling legislation and government oversight.

In the case of the Richmond Ambulance Authority, independence is steeped in tradition. McMenamin has held the chairman's post for 15 years and has been a board member since the authority's birth in 1991 -- two eternities in the world of city-appointed, volunteer committees. But the authority has no term limits and until now McMenamin has never been challenged. The May 26 vote resulted in a 5-5 split on the board, which is short one member, sparking a political face-off.

For his part, McMenamin cites the many successes that have occurred under his leadership and says that given the ambulance authority's recent overhaul from a contractor-based emergency-medical system to a fully in-house operation, “a measure of stability at the board level is a good thing.”

“If there's one agency that's running smoothly that doesn't require attention,” McMenamin says, the ambulance authority is it. He adds that he hasn't heard any complaints from city officials about the authority's transparency, and that the political debate over the chairmanship has become a “distraction.”

“To say leave it alone because it's been working fine for the last 20 years,” Green counters, “doesn't mean it doesn't have room for improvement.” He says the board has become complacent in its tradition of low turnover.

Green says the board also has little contact with the mayor's office, setting its own budget and spending upward of $4.5 million a year in city tax dollars with little input from City Hall.

The issue is on the mind of Mayor Dwight Jones, who addressed the lack of control his office has over City Council-appointed commissions and authorities earlier this year in his state of the city address. In the still relatively new city charter, such commissions fall out of alignment with the elected-mayor government.

While the fight over control of the ambulance authority has raised eyebrows, there are larger issues on the horizon, such as the Richmond Redevelopment and Housing Authority, which controls the city's housing projects. Tackling the city's concentrated poverty, which resides primarily in and around those housing projects, will have an enormous impact on the city and the region during the next decade.

But redeveloping projects such as Gilpin Court and Dove Court over the next 10 years, for example, is largely out of the hands of the Jones' administration.

“The mayor is definitely aware and conscious of the fact that the power of many of the boards and commissions is inconsistent with the accountability of an elected mayor in promoting citywide vision,” says David Hicks, the senior policy adviser to Jones.

While the stakes aren't as high, the political wrangling over the ambulance authority is a microcosm of the larger debate. At times, it's gotten dirty.

Green has alleged that chairman McMenamin has a conflict of interest for the board; his firm McGuireWoods represents the health-insurance company Anthem, which has sued the ambulance authority.

McMenamin says “such an accusation is utterly without foundation,” and responds that he's “been meticulous” to recuse himself from board discussions concerning litigation.

McMenamin has led his own inquiry into a potential conflict of interest on Green's part. Green directs the Virginia-Nebraska Alliance, a nonprofit group that funds research grants for minority students studying health care. Under an agreement initiated in 2005 by the authority's former chief executive, Jerry Overton, the ambulance authority has donated $96,000 to the Virginia-Nebraska Alliance for research by Virginia Union University and University of Virginia students.

Up to 2009, these grants were filed under the category of “miscellaneous” in the ambulance authority's annual budget, apparently going unnoticed by board members.

Green says those research donations are no longer facilitated through his organization, but he criticizes what he sees as the board's lack of oversight in its delayed discovery of his own potential conflict of interest. It's all part of Green's belief that the authority operates too independently of the mayor and city administration.

Each of the authority's board members designated by the city -- 5th District Councilman Marty Jewell and two members from the mayor's staff -- voted for Green.

City Council President Kathy Graziano says she doesn't necessarily disagree with more appointing authority for the mayor: “With this new form of government perhaps the administration should have the right to appoint a person or two,” she says.

For Graziano, the issue of board appointments raises an important debate of whether to adjust or completely redraft the city charter, which retains elements of the former city-manager government.

John Moeser, a senior fellow at the University of Richmond's Bonner Center for Civic Engagement, says the ambulance board's dispute “unearths a larger issue.” He served on the review commission that recommended a review of city-appointed boards and commissions in its September report to the city.

“Who has what authority to appoint whom … particularly now that we have this new form of government,” Moeser says -- “that matter has not been dealt with.”

He says the city's scattered hodgepodge of public boards and commissions, all operating under varying degrees of city oversight and tucked into pockets of state and city code, raises questions of accountability.

“This is what I would kind of call the invisible side of government,” Moeser says.