Richmond has yet to embrace fully its literary greats. 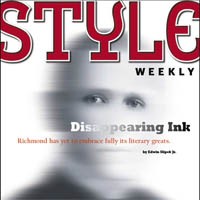 Earlier this fall a colorful banner on West Broad Street proclaimed the grand opening of the Virginia Commonwealth University Barnes & Noble. Inside, a sea of black and gold tchotchkes emblazoned with Ram mascots vied for space with textbooks, art supplies, magazines and even a Quiznos.

On the shelves, however — among the classics, bestsellers and nonfiction — a search for titles by James Branch Cabell turned up nothing. The Richmond novelist, who became an overnight international sensation in the 1920s when his “Jurgen” was censored, is the man for whom the VCU library is named. But he's not on the bookstore shelves.