Why was the Va. governor and Democratic Committee head absent at Obama's first state dinner? 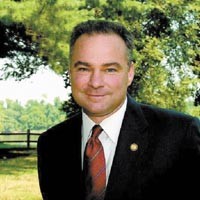 The Associated Press reported on Nov. 19 that Kaine, who was tapped by President Obama earlier this year to head the Democratic National Committee, “didn't snag an invite, so he won't be sampling the naan or curry” at the dinner honoring India's prime minister. Nor was Kaine on the list of “guests invited to the state dinner” published in The Washington Post on Nov. 25.

But that same day, in the Post's coverage of Kaine's last Thanksgiving ceremony in Capitol Square, Kaine told the reporters he didn't attend the dinner because he had family in town for the holiday. That and the fact that Nov. 24 was Kaine and wife Anne Holton's 25th wedding anniversary.

Does that mean he was invited but couldn't make it?

Gordon Hickey, Gov. Kaine's press secretary, says he has “no earthly idea” whether or not Kaine was invited to the state dinner. “It just doesn't matter,” he says. It doesn't matter that the DNC chair wasn't invited to Obama's first state dinner? “Well, I don't even know how to answer that question it's so ridiculous.”

Hickey says Kaine had no public events on his schedule on the night of Nov. 24, but that a state dinner at the White House probably would have been on Kaine's personal, not public, calendar. So maybe he was invited, maybe he wasn't?

“He's been asked this question by a number of news organizations and basically he had a very busy time last week,” Hickey says.

A call to the White House press office wasn't returned by press time.