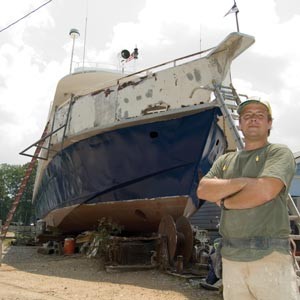 If caterer David Napier gets his way, local dinner cruising will return by summer's end. The owner of White House Catering on East Main Street is renovating a 76-foot-long, 20-foot-wide steel charter boat called Celebration that used to set sail from ports in New York and western Florida.

Pending inspections from the Coast Guard and negotiations with the city's economic development department, Napier plans to dock Celebration at Rocketts Landing or the city docks just west of that development, hiring out the vessel for private, catered cruises for as many as 70 people along the James River.

He's given himself a timetable of three weeks from now to open the boat for business. While it's no Annabel Lee — the public paddle-wheeler that docked at the city's Intermediate Terminal near Rocketts Landing until 2004 — the boat is intended “to be open to the public when we're not out on charter,” Napier says, possibly as a floating bar or restaurant.

For now, Celebration makes its home in the Colonial Harbor Marina, on the Chickahominy River in New Kent County. Napier's former business partner, Forrest Morrow, living aboard Napier's 48-foot trawler, Synovia, has been working long hours with a crew of laborers since May 3 to overhaul Celebration, which was built in 1969. Napier bought the boat from a friend in December.

He got a deal on it. The friend, who'd bought the vessel in Florida, sailed it up the coast, renamed it the Home Office and lived on it with his pregnant wife, five dogs and a couple of cats. The boat ran aground during a storm in Norfolk in December, damaging the propellers and transmissions.

“He needed to get on land,” Napier says.

When Morrow first encountered the vacant boat, picking it up at 3 a.m. one night in April for the 16-hour tow from a shipyard in Portsmouth to the Chickahominy marina, the main deck was filled with piles of clutter and stowed belongings — “everything that you could imagine that somebody would want to store on a boat they're not using anymore,” Morrow says. Jungle-print carpet swaddled the walls.

And then there was the feral cat, living under the galley floorboards, which Morrow says took days to catch but which announced its presence via two five-gallon bucket-loads of excrement and the permeating stench of feline urine. “Mountains, mountains of cat shit,” Morrow recalls.

After gutting the boat, it weighs 5 tons less than it did. The renovated craft will showcase maple hardwood and green marble floors, birch cabinets, a fully functioning commercial kitchen, below- and above-deck bars with granite countertops and stainless steel features, and a stateroom.

“We wanna get some people on there by the end of the summer,” Napier says. He says the charter fee will start at $1,500 for a four-hour cruise, catering not included.