Dinner and a Show

Dining spots within a walkable radius of  CenterStage help you make a night of it.

In general, the drinking is better than the eating in the short radius from CenterStage, but most everything is affordable and therefore more palatable. Here's where to go now for before — and after — theater sloshing and noshing:

Capital Ale House
623 E. Main St., 780-2537
www.capitalalehouse.com
A straight shot down Sixth Street, this restaurant with patio and music hall is a beer-lovers' paradise, with a constant parade of international brews, a pub-grub menu with weekly cheapskate specials on burgers, and other beer-compatible dishes. Lunch and dinner daily.

O'Neill's Penny Lane Pub
421 E. Franklin St., 780-1682
www.pennylanepub.com
For 30 years this authentically British pub has cast its spell on Richmond. Bangers and mash, and cottage pie, Guinness, darts, a Liverpool bar full of regulars and exceptional service give this beloved spot a character all its own. Open nightly except some Sundays. 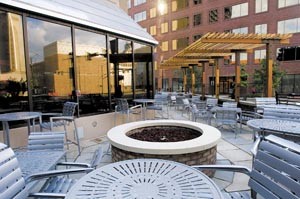 >T-Miller's Sports Bar & Grill
500 E. Broad St. in the Marriott, 648-2255
www.tmillerssportsbar.com
This newly designed, full-service restaurant has outdoor seating around a fire pit and the requisite screens and contemporary dAccor inside. Food runs the burger-steak gamut at moderate prices. Open daily, a one-block walk from the theater.

Coming Attraction
Pie is the newest in a local restaurant group that includes the Fan's Si Tapas and downtown's Bank and Vault. This Italian restaurant in the former Berry-Burk building, at 525 E. Grace St., is under construction with an anticipated late-fall opening. S