Director Romain Gavras gets flashy in “Athena,” while populist Tyler Perry focuses on a familial story in “A Jazzman’s Blues." 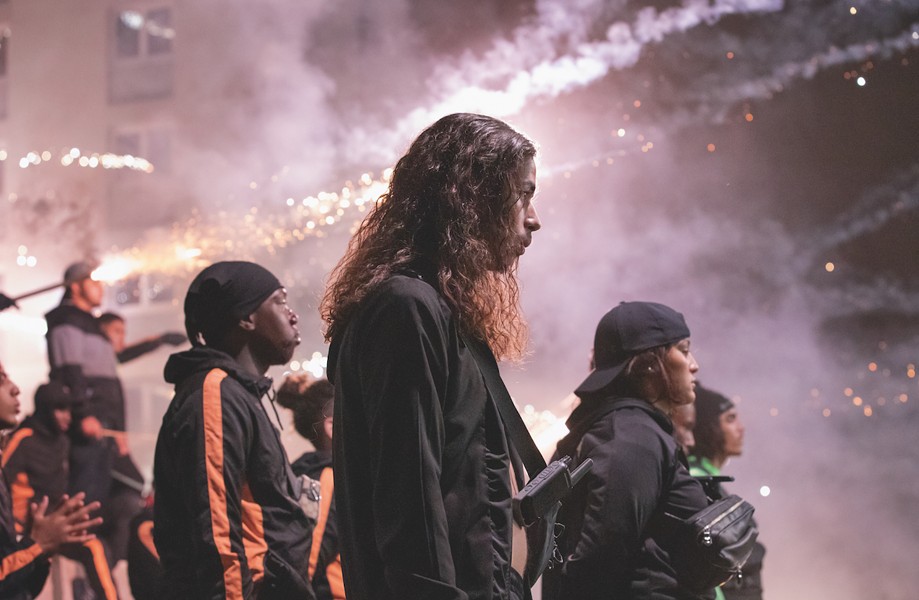 “Athena” is composed of long tracking shots that are meant to…what? I don’t see the point in this case. The device keeps us at a distance, processing the movie as a stunt undertaken by a filmmaker looking to prove himself in the tradition of superficial hotdogs like Alejandro González Iñárritu and Cary Joji Fukunaga. Director Romain Gavras is enamored with men walking steadfastly down hallways, up or down stairways, and across vast rooms. He’s also quite taken with throngs of men charging barricades while Greek music thumps in the background.

There are many variables in these shots, from flares to gun shots to stolen vehicles to tumbling bodies to falling furniture to fiery explosions to tossed-off Molotov cocktails to lines of police and aspiring revolutionaries. The film’s first 10-minute shot—following a group of teens who interrupt a press conference, commandeer weapons and an ER van, and take over a poverty-stricken neighborhood—is its most impressive, though even then the subject matter is eclipsed by the filmmakers’ self-consciousness. After that, it’s endless repetitions of the same idea. You may look at “Athena” and think “that was a bitch to shoot” and you would probably be correct. You may also not care in the slightest what’s happening and why.

“Athena” sounds important on paper, with social issues and pedigreed lineage. It is set around a complex somewhere near Paris, concerning police brutality, racism, and other atrocities born of a militarized caste system. The occupation that drives the film breaks out in response to footage of police killing a boy, sending his three brothers into a tailspin. Middle-born Abdel (Dali Benssalah) is a soldier in the French Army; youngest Karim (Sami Slimane) is one of the leaders of the group that seizes Athena; and oldest Moktar (Ouassini Embarek) is a drug dealer whose business is thrown out of whack by the bedlam. Their attitudes, often conflicting, sometimes in sync when it’s least likely, are meant to be the wellspring of the film’s drama, allowing for examinations of cultural assimilation and alienation. Affirming the film’s sense of relevancy is Gavras’ legacy as the son of Costa-Gavras, the director of the milestone vérité political thriller, “Z,” among others. We’re meant to believe that a tradition is being carried on.

The set-up certainly sounds like promising material for a thriller or melodrama, except that Gavras, obsessed with his convoluted tracking shots, spends a bewildering number of the film’s 97 minutes following people to and from locations. The pyrotechnics are meant to be stirring and incendiary, suggesting the precise spatial relationships between people and the surroundings that insidiously define them, but more often these shots feel like showing off. This preoccupation with tech also renders the characters into ciphers—political chess pieces.

I can empathize with the appeal that tracking shots must have for ascending maestros looking to be the next Kubrick or Scorsese, as they’re impossible not to notice, immediately establishing your bona fides as a stylist. However, modern tracking shots are usually about as deep as 3D. A great tracking shot—such as the Copacabana sequence in “Goodfellas” or the opening of Robert Altman’s “The Player,” itself a parody of the brilliant opening of Orson Welles’ “Touch of Evil”—increases your complicity with a movie. A bad or pointless one inspires initial admiration and, then, if it goes on, curiosity as to when the director will move on to an idea that actually matters. There is also something rather tasteless about turning a story of excessive police force, obviously ripped from many headlines, into a cynical calling card—a fireworks show for cinephiles.

With “A Jazzman’s Blues,” his second movie this year after another “Madea,” Tyler Perry eclipses not only the well-hyped “Athena” but virtually every movie concerned with American evil in recent memory.

Perry is one of the bluntest filmmakers working, but he doesn’t wear that bluntness skittishly or smugly, in the tradition of most artists currently looking to teach us a special lesson about racism or colonialism or sexism. Watching “Passing,” which “A Jazzman’s Blues” superficially resembles, you could see director Rebecca Hall holding up her fastidious, lifeless work for a good grade — her direction was as eager to please as her acting often is. By contrast, Perry is an unembarrassed populist looking to tell a story. He understands that narrative, wielded shrewdly, is a potential gateway to uncomfortable truths. Perry isn’t cowed by the emotional heightening required of melodrama; he doesn’t hide behind irony or sarcasm.

Perry’s an easy target—unfairly. He makes a lot of movies and a lot of TV shows and a lot of money, and the easiest route to critical derision is a certain mixture of prolificacy and commercial success. Yes, he works quickly and often—but not always—sloppily. His movies can suggest very special TV episodes, in which, say, dad must learn to assert himself with his teenage daughter, respecting himself like his hellfire id, Madea, does.

The acting in many Perry movies is all over the place, ranging from superb to negligible, and the writing is equally erratic. But it’s refreshing to see an American filmmaker willing to expose himself by working this quickly over and over, without guardrails. There’s an energy to his method: He may be inconsistent, but he keeps things percolating, capturing emotional textures that a more deliberate craftsperson might miss. And Perry has a sense of how families interact together and within their culture. His notion of connectivity is boisterous, unruly, and vulgar. Madea might be a cartoon, but there’s also the impression that she’s blowing the lid off contained tensions, and that she represents an exorcism for Perry himself.

The point is that while “A Jazzman’s Blues” is a more deliberate film than usual for Perry, its intricate awareness of intertwined familial, political, and religious roots should not be greeted with shock. Perry’s playing for tragedy what he often plays for comedy, dramatizing the gulf of awareness between white and Black worlds and between generations within the Black community. In “A Jazzman’s Blues,” which he wrote decades ago before his fame, Perry lands at a melodrama pitched somewhere between Douglas Sirk’s “Imitation of Life” and Nick Cassavetes’ “The Notebook.” 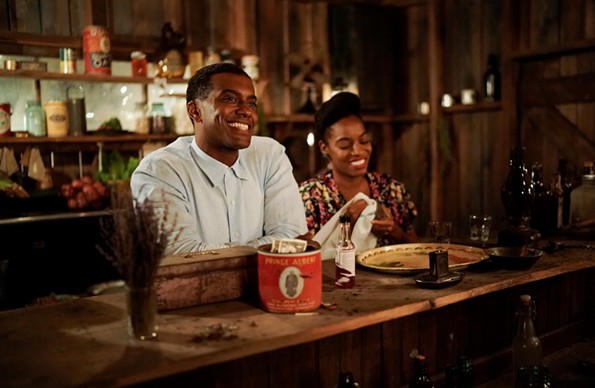 “A Jazzman’s Blues” opens in the 1980s in Hopewell County, Georgia, with a racist white District Attorney running for reelection. An elderly Black woman approaches his office, wanting him to look into an old murder and dropping off a package of letters. There’s already a sense that the lady knows the answers she wants him to unearth, but that she wants him specifically to discern them. As he reads, we flashback to 1937.

Bayou (Joshua Boone) is a sensitive teenager in a family of poor musicians, with a beautiful voice. He is harassed by his father, Buster (E. Roger Mitchell), who prefers Bayou’s brother, Willie Earl (Austin Scott), who has the old man’s gift for instrumentation. It’s never spelled out, but Bayou’s voice is equated with femininity, or weakness. Bayou prefers his mother, Hattie Mae (Amirah Vann), a strong, tender woman who holds the small house together against the tides of Buster’s drinking, tirades, and goading of the rivalry between Bayou and Willie Earl.

Perry sets this all up in a matter of minutes, through poetic dialogue that calls back to his experience in the theater world. Like Paul Schrader’s recent films, “A Jazzman’s Blues” abounds in the presentational surrealism that drives most plays, in which subtext becomes text and people directly air internal thoughts. Perry doesn’t attempt to hide the artifice, and his awareness of the differences between how people act privately and publicly is reminiscent of August Wilson’s plays. Buster may not be noticed outside his house, but inside he’s a formidable, pitiful tyrant, an obstacle to be transcended. White people may not notice their Black cleaning lady, but in her house she’s a fount of stability and empathy, and a powerful jazz singer in her own right. The home is understood to be a kingdom, a prison, a sanctuary, and of course a stage. Perry’s theatricality is convenient for exposition, yes, but it’s also resonant.

Perry forges three plotlines that coalesce into tragedy: Bayou’s rivalry with Willie Earl, his romance with LeAnne (Solea Pfeiffer), an outcast who learns how to “pass” in white society, and his career as a jazz singer once he leaves Hopewell. Death seems to constantly goad Bayou, especially given that his love for LeAnne is impossible in a racist society. Perry routinely shows us things that don’t comfortably fit into a tidy social thesis. The self-annihilating weight of “passing” is particularly explored here with conviction and nuance, especially in a scene when LeAnne, now the wife of an influential white man, dresses down a Black servant who knows her true identity.

Perry’s scenes have an intimate charge. The notion of worlds existing in plain sight within other worlds is powerfully evoked, especially in the juke joint that Hattie Mae runs with the collaboration of the white police officers she pays off. Not every white person is a monster here, and not every Black person is a saint ready to teach us a lesson. Such reductions are not only boring, but condescending to everyone involved. Despite his stylization, Perry offers people, not symbols, and shows them destroying themselves over social sickness, though Bayou and Hattie Mae’s voices serve as an affirmation of the beauty that’s possible even amidst barbarity.

“Athena” and “A Jazzman’s Blues” are both available to stream on Netflix.