Dick Gregory in Black and White 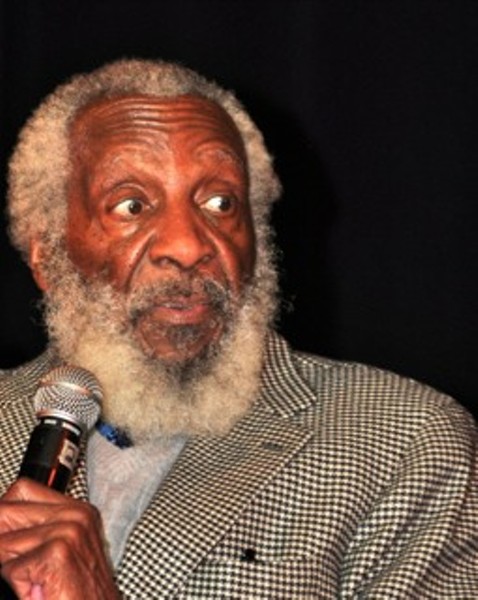 Comedian and activist Dick Gregory noticed something wasn't right at the Byrd Theatre as he started his show on Friday night. He asked for the house lights to be turned up. Nothing happened. He asked again.

“If Abraham Lincoln had said that, he'd still be alive,” the veteran comic said to laughter from the audience he could finally see.

Now that he could look them in the eye, Gregory warned the Caucasians in the theater that he would talk about white people during his act, “but I won't be talking about you.”

Gregory filled the next 90 minutes with observations on popular culture, race relations, philosophy and some regular old jokes. The event, sponsored by the Urban League of Greater Richmond and Tanyafree.com drew about 350 people to hear a legendary comedian. Gregory delivered most of his material from a table and chair on stage, occasionally standing to punctuate a story or recollection. Now that his age has reached the basketball-score range, he certainly deserves his seat of honor among comedy's most brilliant minds.

But even the elderly weren't spared a jab from Gregory, as he reminded them of the real reason why they didn't have to lock their doors when they were young. “You didn't have nothin’,” he said.

He went on to explain his current relationship with poverty: “I'll die for the ghetto, but I'm not living there!” The kind of comedy that Gregory performs makes you laugh and think. It can also make you uncomfortable, as with his frequent invocation of the n-word. He also has the ability to make conspiracy theories sound plausible, as he cited valuable music publishing rights and oil deposits beneath NeverLand ranch as reason for singer Michael Jackson's death.

“No, you ain't no damn pedophile,” he says, recalling a conversation with Jackson, who was dogged by charges of child molestation. “You probably gay.”

The performance of a civil rights icon is a hard act to follow and also a difficult one to preface. But Virginia native Antoine Scott did his best. His persona isn't unlike a character you might see on a Tyler Perry project, with his emphasis on street humor and jokes about his grandma, laundry and Spam.