Ethan Hawke stars as a serial killer in the mostly forgettable “The Black Phone,” while zombie flick, “The Sadness,” smashes taboos with glee. 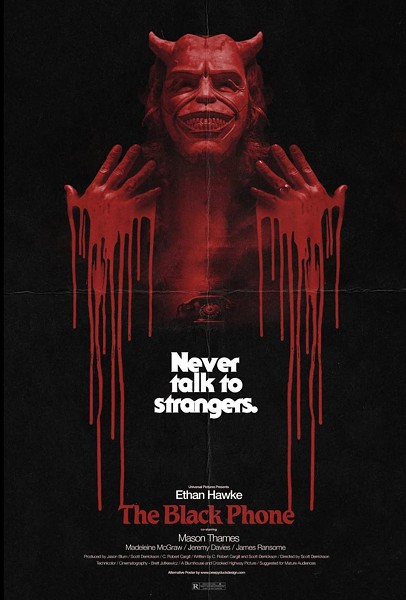 Serial killers in pop culture now suggest relatives who surface every year over the holidays. Both are old-hat and disconnected from life as you know it. Whatever edge serial killers once possessed has been worn smooth by decades of horror movies, bestsellers, and an endless saline drip of true-crime TV.

Mind you, when I say serial killers I don’t mean the actual, real-life men who’ve stalked, raped, tortured and killed and eaten others, but the pop cultural myths that have sprung up around them. Hannibal Lecter, a composite of several killers with more than a dash of James Bond villain, is practically a hero for Christ’s sake. There’s something unseemly about suffering becoming a marketable trope but such is the amorality of consumerism. This hyper-familiarity is a major hurdle for “The Black Phone” to clear.

Early in the movie, we hear tales of a kidnapper and probable killer of children called “the Grabber” and anticipate his lair—a basement-slash-dungeon that is, but of course, soundproof and hidden among an anonymous suburban sprawl—many minutes before director Scott Derrickson shows it to us. We also anticipate a kind of audience-distancing theatricality to the killer that implicitly reassures us that we are only watching something pretend, and Derrickson delivers that too. The Grabber masquerades as a children’s entertainer, driving around in a black van with black balloons. A black van with black balloons? Who in their right mind would get within a football field of that? For all his subtlety, the guy might as well have a child’s foot dangling from his rearview mirror.

If the Grabber was a plumber who had trouble paying his mortgage, attending PTA meetings and watching ball games on a small, beat-up TV, he might’ve been scary for his ordinariness. People who kill others for real, especially the mass shooters, often turn out to be boring, but therein lies a problem: We don’t want to spend money at the theater to see them, but rather fantastical creations in the tradition of Freddy Krueger.

Derrickson, a diligent and occasionally shrewd student of vintage horror movies, certainly knows this, but he also knows that he’s gotta toss in something new if he wants his monster to stick in the collective consciousness. His bad guy needs a trademark, like the stupidly indelible puppet that spouts riddles in the “Saw” movies. Derrickson achieved this aim in the surprisingly scary “Sinister,” presenting a monster just vague enough to be haunting, suggesting a drugged-out, Satanic rocker who happened to live, say, at the bottom of a swimming pool. That movie was very gimmicky, but it got by on the raw power of its snuff-film premise. “The Black Phone” isn’t nearly as visceral, and so the gimmicks and self-consciousness stick out.

Derrickson has a couple of big ideas for the Grabber, which turn out to be better in theory than practice. Besides the children’s entertainer shtick, which is leftover Stephen King (“The Black Phone” is based on a story by Joe Hill, King’s son), and the ironically fey quality that’s virtually required of all cinematic serial killers, the Grabber is most vividly defined by stunt casting. Ethan Hawke, one of the best liked of all working American actors, with an impeccable everyman reputation and penchant for quality projects, is the Grabber. A respected hipster and reliable voice of conscience, a virtual spokesman for Gen X with his appearance in Ben Stiller’s “Reality Bites” and his ongoing collaborations with Richard Linklater, Hawke could’ve made for a rather perverse villain. But Hawke never transcends the stunt: We watch him and don’t see the Grabber, but rather Hawke Playing Against Type. He’s fun, and he occasionally springs a flourish that disrupts the general torpor that settles into the second half of the movie, but Hawke is upstaged by another gimmick: a demonic mask with chillingly detachable mouths.

Hawke’s Linklater association isn’t an accident for Derrickson. “The Black Phone” is set in Denver in 1978, which means two things: This is yet another horror movie about how great ‘70s horror movies are, and Derrickson is determined to rip-off Linklater’s “Dazed and Confused” in addition to all the usual suspects of the horror canon. As a thought experiment it doesn’t sound bad: What if Linklater tried to adapt Stephen King?

But Derrickson is too deliberate a filmmaker to emulate Linklater’s Altman-esque sense of spontaneity. He can’t sustain the illusion that you just happen to be moseying through a ball game or a party. The references are clearly planted here, as they are in most retro-minded horror movies, and the nostalgic, light world of Linklater never convincingly contrasts with the nightmare realm of the King-minded Grabber business. General audiences won’t care about any of this one way or another, while cinephiles will be merely distracted. It annoyed me, for instance, that at least two songs from “Dazed and Confused” are utilized here, as well as the middle-school baseball motif. Mason Thames, who plays the imperiled boy at the center of the killer’s shenanigans, also feels as if he’s been cast for his resemblance to Jason London, from, yet again, “Dazed and Confused.”

“The Black Phone” is mostly just forgettable, as well as plodding. You’ve seen much better, as well as considerably worse, and it could grow in your estimation if you happen upon it randomly on Netflix in the middle of the night three or four years from now. Which is to say that the movie benefits from qualified expectations, though the final scene is embarrassing. There’s a moral here, in which Thames’ character must learn to stick up for himself and even muster enough nerve to ask out a cute girl. Tussling with the Grabber, which comes complete with dial-a-ghost assistance options, provides him with this confidence, as Derrickson seems to believe that unimaginable trauma is what every growing boy needs. Derrickson’s allegiance to cliches is ghoulishly glib.

My year at the movies has already included a lot of carping about what’s wrong with the contemporary horror genre. Well, now it’s time to let you know, all too briefly, about a horror movie that spins a well-worn premise into the stuff of nightmares.

On paper, Rob Jabbaz’s “The Sadness” offers another zombie apocalypse with people who become monsters bent above all else on satiating their profound rage. But the ferocity of Jabbaz’s imagination transcends pat summaries. The filmmaker touches on a number of contemporary concerns, from the polarization of modern media discourse to the misogyny fueling society, while springing set pieces with an escalating sense of physical and emotional intensity.

Jabbaz’s ultraviolent inventiveness feels authentically dangerous. His zombie-things are horrible, far nastier than I can describe here, and his payoffs are always worse than you anticipate. Yet Jabbaz, most daringly, finds comedy in the carnage and violation, evincing a shock-jock’s glee at smashing taboos.

There is a sense of relief on the part of the creatures for being able to succumb to their base monstrousness in such a self-conscious age, which the filmmaker openly shares. Jabbaz has an eye for movement and comic detail that suggests the work Miike Takashi—not the neo-classicist behind films such as “13 Assassins” and “Blade of the Immortal” but rather the daredevil of “Audition,” “Ichi the Killer” and “Visitor Q.”

The wild extravaganza of “The Sadness” shames the recent wan horror films of mainstream culture, which are content to timidly recycle chills from the past. They are wax museums. “The Sadness” is punk rock.

“The Black Phone” is currently playing in theaters. “The Sadness” is available to stream on Shudder.