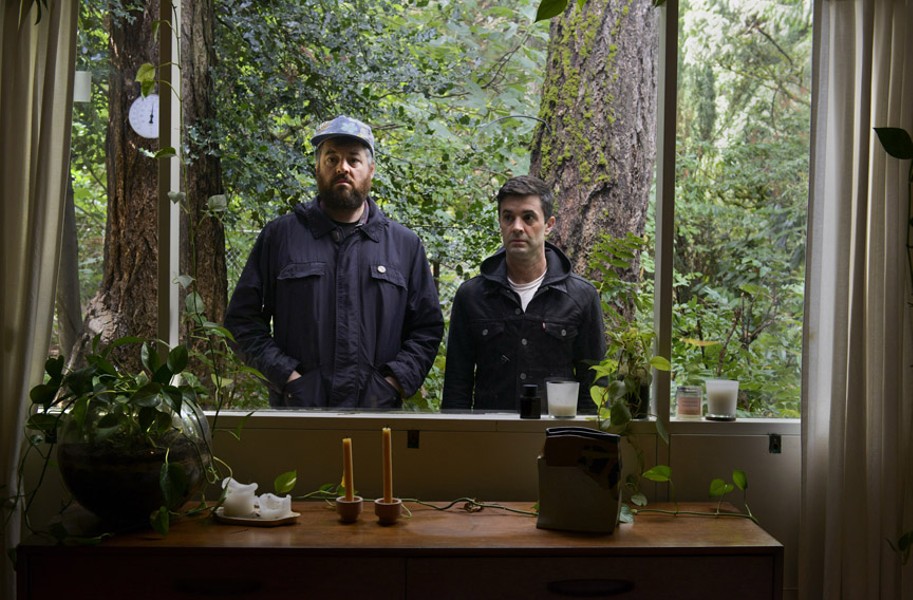 Back in the '90s there was a band called Karp/a power trio of young'uns who knew well how to rock. High school friends bullied in a town called Tumwater/ instead of becoming mass shooters, their heavy songs did the slaughter. Signed to K Records for sonic kicks/the band name stood for "kill all redneck pricks."

Don't worry, I'm not going to continue rhyming that Northwest band's bio — but a little musical background on my interview subject seems helpful.

I got to see Karp play a few times in a Mexican food bar called Juanita's in Northern California. They were memorable shows led by the twin vocal barrage of guitarist Chris "Slayer" Smith and bassist Jared Warren, as well as room-rattling drummer Scott Jernigan. One of the band's popular live songs at the time contained the maniacal chorus: "Ding Dong, I'm fucking with your head/I'm fucking with your head. [Screamed:] Ding Dong, the witch is dead."

The group broke up in 1998 amid the guitarist's drug problem and not long afterward, the drummer died in a tragic boating accident. But Warren, still a vital musical force onstage, has continued his hard-rock odyssey. It's taken the bassist from bands the Whip and Tight Bros From Way Back When to his current and longest-running project, the powerful duo Big Business with drummer Coady Willis from Murder City Devils.

For several years, the pair also served as the explosive rhythm section for legendary heavies the Melvins, while keeping Big Business going.

"I took away a lot of things from that experience [with the Melvins]," says Warren from Los Angeles, where he's raising a family with two young ones. "Maybe the most important thing was they reaffirmed for me that if possible, as much as you can, you should do things for yourself. The music industry is not what people think it is."

Last April, Big Business released "The Beast You Are," a full-length featuring its proglike metal riffing, stadium-sized hooks and vocals, with songs titles such as "Abdominal Snowman," "The Moor You Know" and "Complacency is Killing You and Those Around You." The music is heavy, but don't make the rookie mistake of calling it sludge. It can be ferociously fast and there's a pop underpinning.

"I kind of like to think of the heaviness as more of an overall devastation as opposed to a particular tone you're making," Warren says. "I've always thought of us as a heavy pop band, you know? Like if Cheap Trick was a little darker [laughs]."

Part of that influence comes from growing up in the '70s with rocker parents during the heyday of FM rock radio, he says.

"Cheap Trick, Credence, all that stuff was super influential, more so than a lot of metal stuff," he says, noting that he recently watched a PBS documentary that included the latter band. "Credence is a heavy band. Man, they were unstoppable. I don't think people got what a force they were."

Warren was late to the metal game, he says. "It wasn't like I had the whole back catalog of Iron Maiden records. But I do have all the Cheap Trick records. … Deep Purple was often played in my house growing up."

The new album was recorded by Phil Becker at El Studio in San Francisco, an old '70s studio in an industrial area where the Melvins' "Ozma" was made. It was the first time in a while the band could focus on its own material, Warren says.

"This was the first record we did real demos for on our own. Coady has gotten pretty handy with Pro Tools, so that was nice. We felt like we were more prepared going in," he says. "I feel like we were more confident in the studio. Maybe more of a vision, I guess, of how we wanted it to sound."

Big Business stands apart from other heavy groups by its willingness to experiment and stay challenged as musicians. Warren says it has been experimenting more with "nondrum and bass instruments" and would love to explore soundtrack work in the future. He does live in Los Angeles.

"I could see our music in a lot of movies," he says. "It's a crowded game to get into. Everybody who used to be in a band and now has a family, that's the game. I know so many people who just make jingles for commercials. Nobody has asked them, they just make them in hopes of selling them."

He notes that once back from this East Coast tour the band plans on "probably recording another EP or something to keep our heads above water."

If you're a fan of the Melvins or Karp, or any heavy band that isn't easy to pigeonhole, you'll want to catch this pulverizing show. Also Big Business is scheduled to play the Desert Daze Festival in California this fall with Wu Tang Clan, Devo and Ween, though it's more often on bills with heavier bands.

The duo hasn't played Richmond since 2005, its last show held at Nanci Raygun, the former name for the Strange Matter space. Warren says he doesn't know quite why it's been so long. "I remember that show being really fun, too."

Big Business performs at the Richmond Music Hall at Capital Ale House on Sunday, Aug. 25, at 8 p.m. With A Deer A Horse and Tel opening. Tickets cost $12 in advance and $15 at the door.