Quill Theatre mounts “She Stoops to Conquer” as part of the Richmond Shakespeare Festival. 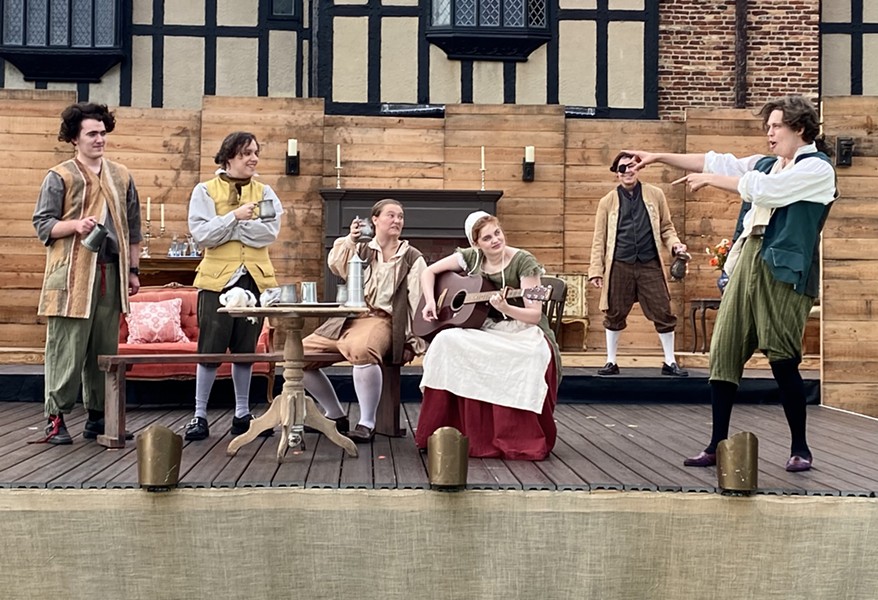 Scott Elmquist The cast of Quill Theatre’s “She Stoops to Conquer” which runs July 14-31 as part of the Richmond Shakespeare Festival at Agecroft Hall.

As a pre-teen growing up in Victoria, British Columbia, James Ricks was fascinated while watching his older sister play Mrs. Hardcastle in Oliver Goldsmith’s play “She Stoops to Conquer.”

“My sister managed to get quite a lot of laughs, and I, who was already dabbling in class clownery, sort of said to myself, ‘I can do that,’” Ricks recalls. “That sort of got me interested in theater in the first place. It’s kind of near and dear to my heart.”

Now, for the first time, Ricks is mounting the play himself as director of Quill Theatre’s second production for this year’s Richmond Shakespeare Festival.

First performed in 1773, “She Stoops to Conquer” has long been one of the most popular works in the English language. The play tells the story of two well-bred men who visit the country estate of Mr. Hardcastle with the intention of wooing Hardcastle’s daughter Kate and her cousin Constance. Things go awry when a prankster convinces the men that Hardcastle’s house is actually an inn and that Hardcastle is an innkeeper.

Charles Marlow, one of the well-bred men, is a crass ladies’ man around lower-class women but becomes nervous around those of his own social standing. After learning this, Kate decides to woo Charles by pretending to be a barmaid, therefore stooping to conquer.

“She discovers this whole other side of him which intrigues her,” explains Katy Feldhahn, who plays Kate in the show. “She’s very resourceful, she’s very determined, and, as we learn more about her, we realize that she’s a little calculating. She’s got a whole plan and she has everyone in her web.”

Ricks says that part of the play’s longstanding appeal is that it was one of the first comedies to move away from mocking the upper-class and focus more on working- and middle-class characters.

“It’s a fairly byzantine story, but there’s a ton of great characters in it, and some really clever wordplay, some great situational comedy. You really see the origins of the sitcom in a play like this,” Ricks says. “We could all use a little levity right now, and this show is such a character rich story with a lot of great comedy, with some really great talent.”

In Quill Theatre’s production, Debra Wagoner plays Mrs. Hardcastle. Overprotective of her son Tony, a mischievous playboy, Mrs. Hardcastle lies to him about his age to keep him from an inheritance of £1,500 per year.

“She thinks that her son hangs the moon, and she’s spoiled him rotten,” Wagoner says. “He’s just this horrible, horrible kid. There’s a lot of comedy to be mined in that.”

Wagoner says part of the show’s appeal is that it’s being staged at Agecroft Hall, a Tudor manor house that was originally built in England in the 15th century, then dismantled and reconstructed in a similar fashion in Richmond.

“It’s a comedy, and it’s at a beautiful, historic landmark,” Wagoner says. “Come sit out on the lawn at Agecroft Hall and soak up the gorgeousness.”