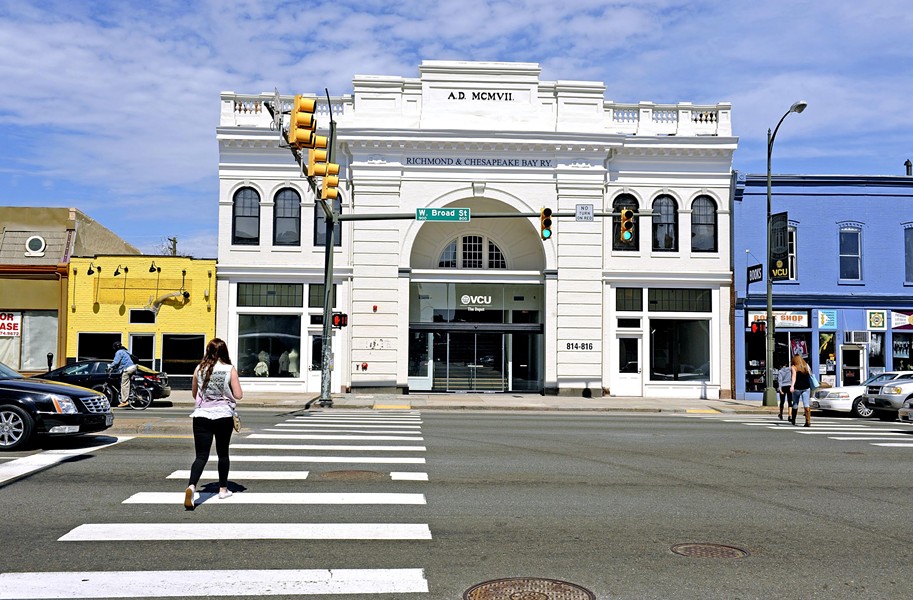 Scott Elmquist This neoclassical terminal at West Broad and Laurel streets opened in 1907 for electric rail service to Ashland. Renamed The Depot, it has been repurposed for classrooms and galleries.

If you aren't looking for it, you might miss a gem of a building amid the traffic clusters along West Broad Street, between Belvidere and Ryland — a stretch that's quickly become a linear hub of the Virginia Commonwealth University campus.

But if you approach Broad Street from the south along Laurel Street, look straight ahead and squint. You'll see a triumphal Roman arch glistening in the daylight. Well, almost. Like the arches of Titus or Septimius Serverus in Rome, this classical confection has a large semicircular and recessed archway, an impressive entablature, a crowning attic order and a healthy helping of architectural ornamentation.

But closer inspection reveals that this arch is flanked symmetrically on the sidewalk level by two storefronts, each with a display window, and three bays of arched windows on the second floor. So if clearly we aren't in the Roman Forum, then meet The Depot. This former street railway station has been dramatically repurposed by VCU's School of the Arts for galleries, classrooms and dance studios. Although restoration work continues on parts of the 26,500-square-foot complex, the inaugural student exhibitions here introduce an intriguing and ambitious new gallery and arts space.

Like hundreds of sturdy old Richmond buildings, the Depot wasn't intended for its current use. It was opened in 1907 — announced in Roman numerals, "A.D. MCMVII," in a recessed panel near the roofline — as the southern terminus of the Richmond & Chesapeake Bay Railway. Passengers entered from Broad Street through the grand arch and ascended a steep, covered but open-air staircase to reach second-floor boarding platforms. With 1907 being the Jim Crow period of segregation, these platforms were flanked by two waiting rooms, one for blacks and one for whites.

Before ascending the stairs, passengers might have popped into one of two ground-level shops to purchase refreshments for their short journeys. When the station opened, Atlas Confectionary and Lunches occupied the easternmost retail space. The trains rolled over Carver and Bacon's Quarter Branch via a concrete trestle and followed a route along today's Brook Road and on to Ashland.

The former local architecture firm of Noland and Baskervill designed the terminal in the then-popular Beaux Arts style. The idiom appropriated classical forms and proportions for modern buildings — for a range of uses the ancients never could have imagined.

Consider: About the same time Noland and Baskervill designed this modest station, it was creating a synagogue for Congregation Beth Ahabah (1904), the Jefferson Davis Monument (1907), a sanctuary for St. James's Episcopal Church (1912) and a showy townhouse for Richmond businessman Frederick Scott (1911). These latter projects were within a few blocks of each other along fashionable West Franklin Street and Monument Avenue.

On Laurel Street, just a few blocks south of the railway terminal, completion of the Cathedral of the Sacred Heart in 1906 by architect Joseph McGuire signaled the apex of Beaux Arts grandeur in Richmond.

But if passengers were passing through classical splendor when traveling to Ashland, the Richmond and Chesapeake Railway soon suffered. It never was granted a planned charter to connect to Tappahannock. So low ridership, increased competition from automobiles and buses, and the Great Depression conspired to bring the demise of this electric rail service in 1938.

While the tracks and concrete trestle disappeared, fortunately the terminal itself survived. For almost half a century it served the Richmond Glass Company. In 1974, when things classical were considered hopelessly passé, the glass operation encased the classical edifice with aluminum siding. Most folks soon forgot about the sumptuous facade buried beneath.

Miraculously, aesthetic tastes evolved, and by the turn of this century interest in historicist architecture was rekindled. And importantly, developers weren't ignoring lucrative historic preservation tax credits. So a number of years ago, local developer Justin French acquired the terminal and removed the aluminum siding. When he subsequently lost the building, VCU eventually acquired it.

At one time, the university may have had little reason for an arts facility at this location. But things on the Monroe Park campus have changed. Its Anderson Gallery long had outlived its adequacy as an exhibition space, and the art school had established a beachhead in the form of a sprawling new studio building at Broad and Shafer streets. Then the university announced plans for an ambitious new Institute for Contemporary Art at the southwest corner of Broad and Belvidere, designed by Steven Holl Architects. The Depot made great sense. It would be a programmatic and architectural link at 814 W. Broad St. between these two other arts facilities.

Richmond-based Commonwealth Architects designed the adaptive reuse of The Depot (Trent was contractor) and carefully restored and refreshed both the bones and the classical filigree. The firm respected what's old — including maple floors and aged elevator shafts — by making what's new obvious. At the Broad Street entrance, a large, translucent wall of glass now encloses the once-open, central staircase, which allows the grand front arch to retain its architectonic power.

So now, instead of passengers rushing to catch their trains, art students will pass under the grand arch, happy to display their output or make new discoveries. And the city's culture — both architecturally and artistically — rolls ahead in a very savvy way. All aboard. S