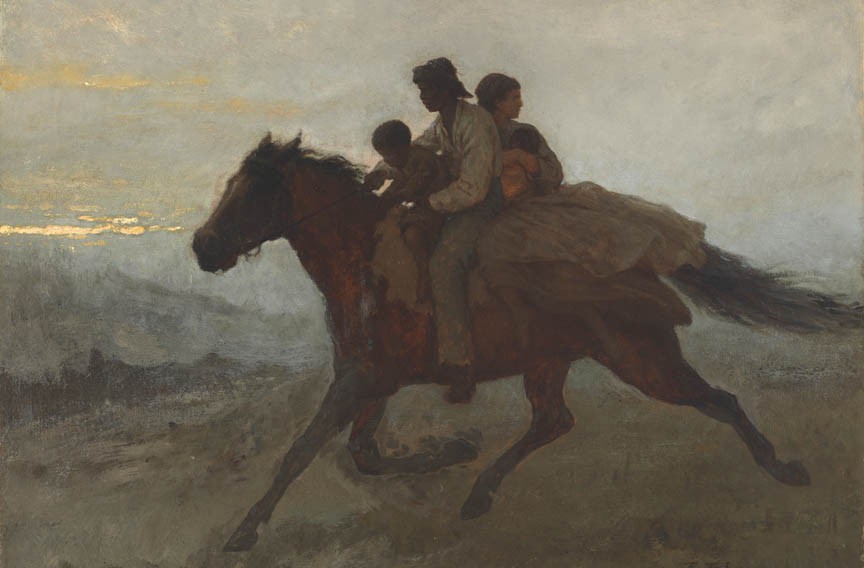 When a nation turns on itself, it is inevitable that the artistic community will respond with words and images. And what better way to assess the impact of the Civil War than through the eyes of that war's chief scribe?

"Bold, Cautious, True: Walt Whitman and American Art of the Civil War Era" allows the Virginia Museum of Fine Arts to put a Virginia stamp on an exhibit originally organized by the Dixon Gallery and Gardens in Memphis, Tenn., in 2009.

"We wanted to bring in Whitman's role and tone by looking at paintings of the Civil War era," says the museum's chief curator of American art, Sylvia Yount. The Richmond reworking of this recently opened exhibition takes its title from Whitman's poem, "As Toilsome I Wander'd Virginia's Wood."

The centerpiece of the 30-piece exhibit is one of the museum's seminal works, Eastman Johnson's "A Ride for Liberty, the Fugitive Slaves, March 2, 1862." Also included are more Southern artists than were represented in the original show. Along with the paintings, on view are a sculpture and two rare books — an original 1855 edition of Whitman's "Leaves of Grass" and his 1865 "Drum Taps," the collection of poems that came out of his war experience.

"What was so radical about Whitman's poetry was that it was contrary to the Victorian poetry of the time," Yount says. "It wasn't flowery. This is a fresher look at the Civil War. This is a response that took a little longer."

By juxtaposing the writings of Whitman with various landscapes and genre scenes by Winslow Homer, Conrad Wise Chapman and Frederic Church, among others, the exhibition offers a contemporary understanding of America's visual and verbal responses to the national crisis while demonstrating to visitors the museum's strong holdings in American painting.

"There's a big Virginia context," Yount says. "It's why I was so interested in bringing it here. It was when Whitman set out from New York for Fredericksburg to find his brother that he decided he wanted to become a nurse. He worked in Washington, D.C., at the hospital they set up in the old Patent building, now the Smithsonian American Art Museum. Culpeper, Fredericksburg — he traveled all over Virginia, so there's a biographical theme for Whitman and a lot of artists."

Because it offers multiple interpretations of the war, the show has the potential to appeal to literary and history fans as well as art lovers, Yount says: "It's a great opportunity in the middle of the sesquicentennial to look at the role of artists and writers trying to make sense of the crisis that was happening in this country." S

"Bold, Cautious, True: Walt Whitman and American Art of the Civil War Era" runs through Aug. 26 at the Virginia Museum of Fine Arts, 200 N. Boulevard. For information call 340-1400 or go to vmfa.state.va.us.