After redistricting, fewer competitive races have many predicting a snoozer at the polls. But just wait until next year. 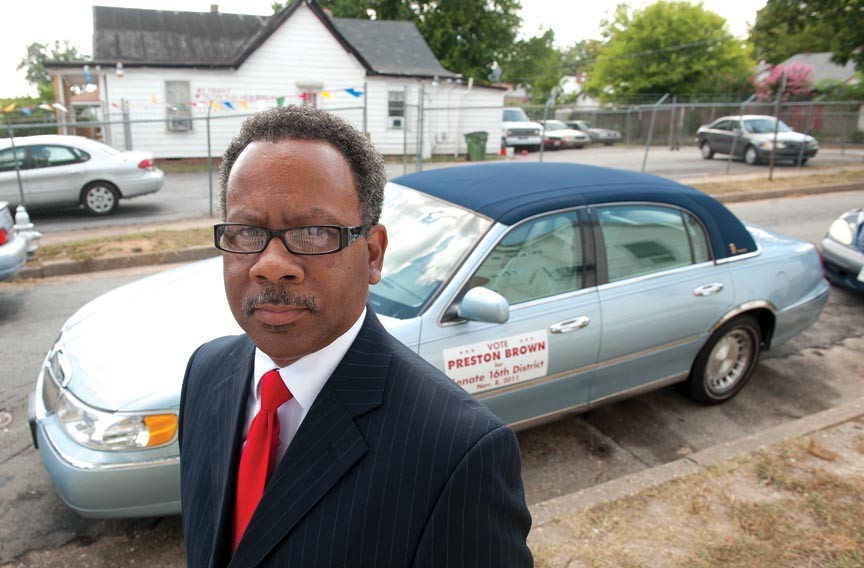 If a candidate campaigns, but no one knows it’s an election year, does he make a sound?

Trouble is, a lot of people still don’t know anything’s happening on Nov. 8. “When you say election, they say, ‘Oh, is it time to vote for Obama again?’” Brown says.

This might be one of Virginia’s least eventful election years. Ever.

Only about a third of seats in the House of Delegates are contested. In Richmond and the surrounding counties, 11 delegates — seven Republicans and four Democrats — are running unopposed. Only Delegate Joseph D. Morrissey, a Democrat who represents parts of Richmond, Henrico County and Charles City County, has a challenger: Dwayne E. Whitehead Sr., an independent candidate who’s pastor of World Overcomers Christian Ministries in Fulton Hill.

In the state Senate, where Republicans are trying to eke out a majority, 26 of 40 races are contested statewide. Very few of these races could be considered interesting, in the opinion of Quentin Kidd, chairman of the government department and director of the nonpartisan Wason Center for Public Policy at Christopher Newport University.

The Richmond area has Democrat David M. Bernard challenging well-ensconced Republican Sen. John Watkins, as well as the Brown-Marsh contest. Brown says Marsh’s lack of visibility is the reason many people don’t know it’s an election year. But Marsh doesn’t have to do a lot to be re-elected, Kidd says: “Preston Brown isn’t pushing him like a well-funded Republican would push him.”

Brown, who’s running as an independent, has raised a bit more than $19,000 for his campaign, according to the nonpartisan Virginia Public Access Project. Marsh has raised $85,000.

Brown is undismayed. “I’m going to knock the boots off him,” he says. “We’re looking good. I’m going to be your next senator.”

Kidd predicts that most incumbents will keep their seats. In the few districts where the elections could have been competitive, he says, the challengers failed to raise enough money to be resilient candidates.

In short, “It’s a sleeper,” Kidd says. “And the shame is, it’s a sleeper because of redistricting.”

The state redraws the lines of its voter districts once every decade, adjusting them for changes in population. This year’s redistricting efforts were more transparent than in the past, Kidd says. There was ample media coverage. Teams of college students submitted their own plans. The governor appointed a bipartisan commission to guide the process.

But the end result, Kidd says, was the same. Legislators drew the lines where they wanted them to be, gerrymandering the state, protecting incumbents and discouraging challengers. “Whatever light got in that room wasn’t enough to change that process, the way it worked,” he says.

Here’s the kicker: The General Assembly has not yet voted to approve a plan for the state’s new congressional district lines. If Republicans win control of the state Senate (they already have a majority in the House), the party will control that process, Kidd says.

Yet just 15 percent to 17 percent of eligible voters will come to the polls Nov. 8, Kidd predicts. That’s 9 percent of the state’s population. So less than 10 percent of Virginians will vote on the people who decide how to spend the state’s $80 billion budget.

The upshot? “This election is going to be, I think, a demonstration of democratic dysfunction,” he says.

Paul Goldman, the longtime Democratic strategist, says after three straight years of “high-tension” elections the public simply may be worn out. Off-year elections almost always generate less turnout at the polls, he says.

“I wouldn’t read too much into the fact that it looks like apathy,” Goldman says. “There is only so much energy that people have for politics.”

It’s all about next year. Although Kidd doubts Virginia’s Republicans will be able to claim the Senate majority they crave, he thinks they’ll gain some positive momentum in this year’s elections. Then, he says, “they’ll roll that energy right into a presidential and U.S. Senate race.”

The 2012 match-up between two former governors — Democrat Tim Kaine and Republican George Allen — will be the nation’s most-watched Senate race, Kidd says. Already, both candidates are on the campaign trail. For months, Allen and his wife, Susan, have slogged through weekly women’s club lunches and small-town-diner breakfasts all over the state. Kaine has been less visible, focusing his energy on stumping for local candidates. Their first debate is Dec. 7 — almost exactly a month after the elections — or 11 months before the next ones.

Allen and Kaine are evenly matched in the most recent polls. They share high name recognition. And to make things more interesting, tea party favorite Jamie Radtke and three other candidates are challenging Allen for the Republican nomination. Two Democrats are taking on Kaine.

“It’s going to be a dogfight to the end,” Kidd says. “A year is a long time. Anything can happen.” S