Positive, smiling candidates are the new winners. So why won't the Democrats cheer up? 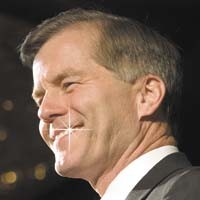 After three decades of slogging through the political trenches as a newspaper journalist, here's my first stab at armchair commentating on a Virginia gubernatorial election.

My No. 1 bombshell revelation: Cheerful is good. Dour is a downer. And when you're dozing on the divan, nobody wants an unrelenting diet of child sexual predators and 20-year-old master's theses.

Not that those last two don't have their place. But an attack ad that sizzles on the first 50 hearings can pretty much fizzle by the 500th.

It turns out that campaigns look a little different from afar than close up. When you're not dissecting press releases and analyzing position papers and getting instant access to high-paid consultant types, you're left listening to your friends and neighbors and the telly.

Most regular voters can't debate the nuances of federal highway funding formulae or Medicaid reimbursement rates, but they're pretty attuned to the glimpses of character and competence that show up in paid advertising and unpaid media such as the nightly news.

And well before the polls closed on the worst rout of a Democratic candidate for governor since 1993 (even that year, one of Democrat Mary Sue Terry's running mates squeaked through), it was clear from the sidewalk buzz that Nov. 3 would be a very grim night for the party previously on the ascent in Virginia.

Pure and simple, Democrat Creigh Deeds didn't adequately define himself for the masses as either a person or a politician. Republican and future Gov. Bob McDonnell did.

Thanks to an unrelenting stream of ads focused on McDonnell's conservative social views, including skepticism about working women, my neighbors knew there was cause for wariness about McDonnell's resume. But after a host of women testified to McDonnell's change of heart, that wasn't enough to seal the deal for Deeds.

He needed something more — like a portrait of himself. Not until the 11th hour did his ads return to the folksy, aw-shucks pose and reminder of his humble roots that appealed during his long-shot win of last spring's Democratic primary. And never did he settle on a consistent, coherent theme that competed with McDonnell's focus on jobs and his promise — however implausible — to fix transportation without a tax increase.

Future campaign strategists might note that for two elections in a row, Virginians have refused to be scared into jettisoning a politician whose platform and demeanor aren't scary. Over-the-top attacks on Democrat Tim Kaine for his opposition to the death penalty weren't any more effective in 2005 than Deeds' assault this year.

And while cynics may snort, both Kaine and McDonnell probably insulated themselves with early biographical ads showing them as genuine family men, tossing footballs and pitching tents.

Like I said, out here in real-people land, cheery sells.

For added evidence, check out Democratic Attorney General candidate Steve Shannon's TV self-portrait as the avatar of doom. What was he thinking? Probably that sounding very serious and getting as far to the right as possible on law and order issues is a good position for a Democrat. But, hey, even CSI-types smile now and again.

Attorney General-elect Ken Cuccinelli has some pretty extreme views on matters such as abortion, immigration and gay rights. But he had the good sense to look like a pleasant enough fellow when introducing himself to Virginia voters.

Would a stronger message and more appealing face have saved Democrats this year? That's far from certain.

In politics as in life, there's a lot to be said for wanting something very, very badly. And after losses in two gubernatorial races, two U.S. Senate contests and last year's presidential race, Republicans didn't need robo calls to fire their enthusiasm.

Maybe that's a partial explanation for the phenomenon in which for decades, every four years, Virginia has elected a governor of the opposite party from the man in the White House. When you're thirsting for victory, you work harder.

A fired-up opposition wasn't Deeds' only challenge. Geography didn't help either. In recent elections, Democrats who win statewide typically build a base in eastern Virginia's urban-suburban corridor. But having grown up in Northern Virginia and represented Virginia Beach in the state legislature for many years, McDonnell had easy access to many of the swing voters Deeds needed to win.

The Bath County Democrat countered by trying to craft a coalition of rural voters and Northern Virginia suburbanites. But that combination, shaky from the start, never jelled.

And then there's the matter of national politics. How much did disaffection with Barack Obama or angst over national health care and a struggling economy intrude on the Virginia results? No doubt some. But just as when Virginia voted for George W. Bush for president in 2000 and then embraced Democrat Mark Warner for governor a year later, the switch in parties doesn't necessarily signal any deep erosion in presidential support.

If my neighbors are a test, many enthusiastic Obama supporters were lukewarm at best on Deeds. Some didn't bother to vote. One of the lowest turnouts in a recent Virginia gubernatorial election — aided by a substantial drop-off in participation by Obama voters — suggests that the problem was far less the president than Deeds.

Even so, Virginia and even national Democrats would be ill-advised to dismiss the GOP sweep in Virginia as a fluke. The last time Democrats lost so badly here, back in 1993, the Gingrich revolution swept Washington a year later.

The best defense will be assertive action by Democrats currently in Congress and candidates next year with a clear message.

Oh, and it won't hurt to explain that platform, now and again, with a smile.

Margaret Edds is a former political reporter and columnist for The Virginian Pilot. She lives in Richmond.