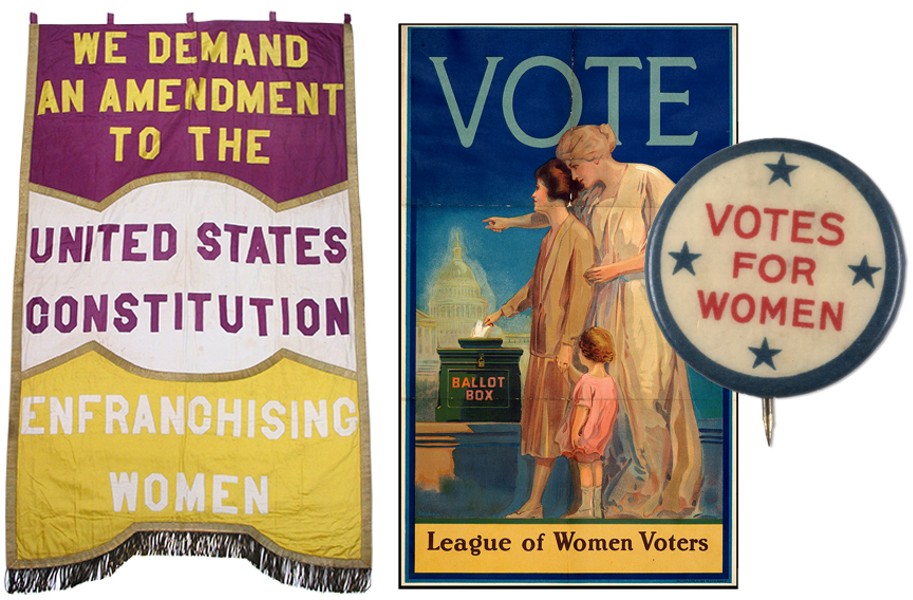 Chances are that you’ve never heard the song, “She’s Good Enough to Be Your Baby’s Mother and She’s Good Enough to Vote” by Alfred Bryan and Herman Paley. Despite the cumbersome title, the 1916 tune was just one element in the arsenal of the Equal Suffrage League as it worked tirelessly to secure the vote for women.

“We Demand: Women’s Suffrage in Virginia” at the Library of Virginia provides a succinct yet fascinating look at what the league, as well as the Virginia branch of the more radical National Women’s Party, managed to achieve while being constrained by society to fulfill their roles as nurse, maid, chief cook and bottle washer.

In a year when the centennial is being celebrated nationwide, the library is telling a unique story because it holds the papers of the Equal Suffrage League, possibly the largest holding in the country of any state women’s suffrage organization. The Library of Virginia re-opened its exhibition gallery to the public Aug. 26.

You can practically hear the disapproval dripping from a Nov. 3, 1920, Richmond Times-Dispatch headline, “Women Go to Polls with Babes in Arms,” despite the fact that not a single woman in the accompanying photograph is carrying a child. Other newspaper headlines in the exhibition trace the evolution of popular thought on the subject: In April 1910, Tazewell’s Clinch Valley News opined, “Can’t Rock the Cradle and Vote, Too,” but by August 1915, it was asking, “Can we not see that woman suffrage is just one step onward in our march toward the really, truly democratic America?”

Not every woman of the era was eager to obtain the vote. The Virginia Association Opposed to Woman Suffrage worked against the suffragists, fearful that if women got the vote, those casting ballots would include Black women. Mary Anderson Williams, president of the association, questioned how it could be in the interest of Virginia to disturb “and jeopardize the whole social order existing between the Negro and white races in Virginia and possibly throughout the south?” The literature members distributed was intended to scare white Virginians.

Tellingly, many white suffragists didn’t challenge – or even doubt – the wisdom of racial segregation and white supremacy. Virginia’s Black women who supported women’s suffrage didn’t attempt to join the all-white Equal Suffrage League of Virginia, nor try to form a separate Black state organization. Instead, they often discussed or endorsed suffragists at their own women’s club meetings, much the way white women gathered with friends in private homes to hold parlor meetings to strategize and enlist new members. On display in the exhibit is a teapot, cup and saucer emblazoned with “Votes for Women” which was owned by suffragist Alva Belmont for use at such gatherings.

Barbara Batson, the library's exhibition coordinator, co-curated the show with Marianne Julienne and Brent Tarter. All three were surprised to learn that the suffrage story didn't end exactly how they’d thought it did.

“The General Assembly didn't ratify the 19th Amendment, but it did pass a bill allowing women to register if the amendment was ratified after Virginia's registration deadline and the assembly took the first step to amend the state constitution to allow woman suffrage,” explains Julienne, “which showed that the suffragists had, in fact, persuaded Virginia’s politicians that women wanted suffrage and were entitled to it.”

The suffragists used every method possible to get their message out. At the 1916 State Fair of Virginia, the Girl Aviator Wonder, aka 19-year-old Katherine Stinson, was hired to drop 30,000 suffrage flyers over the midway one afternoon. Regularly published broadsides showed a suffrage victory map where women did and did not have the vote. A 1919 version in the exhibit proclaims “Women are People!” but shows that, while every state west of the Mississippi, except New Mexico, had granted women voting rights, Arkansas and New York were the only progressive states east of it.

A century later, that legacy continues. Protests and marches by women for women’s issues – such as the Worldwide Women’s March in January 2017 – adopted the tactics of the National Woman’s Party, such as nonviolent picketing and marching. Says co-curator Brent Tarter: “The National Woman’s Party was the first organization to picket the White House and that was a very effective tool.” An enlargement in the exhibit shows the suffrage parade in Washington in 1913 on the day before Woodrow Wilson’s inauguration, an event that attracted 8,000 women.

Marking the centennial of women getting the vote is a reminder that the vote is the most powerful tool a citizen has.

“It was not a right for many Americans for many years and required years of agitation and advocacy to obtain,” Batson says. “And for the many eligible voters who face barriers on elections days, achieving suffrage remains a struggle. Your vote does count!”

“We Demand: Women’s Suffrage in Virginia” runs through May 28, 2021 at the Library of Virginia and is currently open to visitors Tuesday through Friday, 10 a.m. to 4 p.m. There will be a virtual panel “Unfinished Business: What the 19th Amendment Didn’t Do” on Oct. 8 at 5 p.m. Registration required. lva.virginia.gov.