Comedian Todd Barry marches — slowly — to his own bongo. 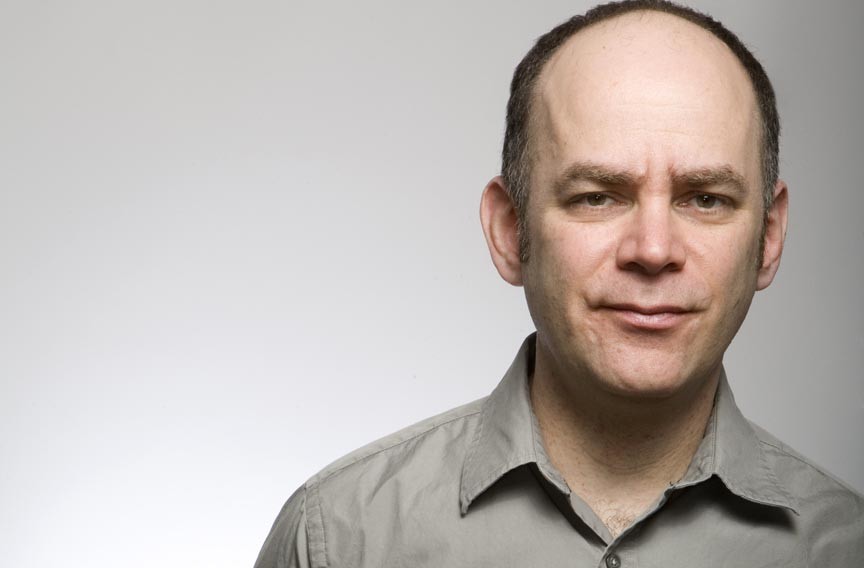 If comedian Todd Barry were any more low-key, you might want an EpiPen handy to plunge into his neck. Just to be safe.

The balding, 48-year-old New Yorker with the furrowed brow is known for observational stand-up comedy delivered in a deadpan monotone usually with near perfect timing. His persona is that of a somewhat disgruntled, world-weary smartass with a pinched smirk suggesting mild amusement at life's little absurdities. He seems like he'd have a lot of hangups.

Critics liken him to other deadpan comedians such as Steven Wright, although that probably has more to do with their thinning hairlines and stoney delivery than jokes. But like Wright, Barry's punchlines are perfectly suited for the attention-deficient Twitter generation. He has more than 175,000 followers re-tweeting Barryisms like this one: "Twitter should have a 'live chat' feature. I'm joking."

The measured, emphatic delivery makes all the difference.

"I've really never, ever consciously worked on how I deliver a joke," Barry says from New York, just after rolling out of bed. He clarifies a little: "I never said, 'I'm going to talk quietly or slowly.' If I had my choice, I probably wouldn't be this quiet. Sometimes I listen to my voice and I hate it."

Barry often is recognized for guest cameos on acclaimed television shows such as FX's "Louie" and HBO's "Flight of the Conchords" — playing himself on the former and an arrogant bongo player on the latter. There also are the bit parts in movies: the jerky deli manager in "The Wrestler" and Sherm in the recent comedy, "Wanderlust." Barry also has a role in the upcoming film, "Vamps," by his friend, Amy Heckerling, the director of "Clueless," where he will play Sigourney Weaver's vampire henchman. Last month, Comedy Central began airing his new one-hour special, "Super Crazy."

This November marks the 25th anniversary of Barry's first stand-up performance in North Miami Beach, Fla., during the comedy boom of the late '80s. He says he knew he wanted to be a comedian from that first open-mic.

"I did it as a goof — then I felt confused afterward," he says. "Something was happening in my head. It was like a weird, 'Oh man, maybe this is what I want to do, but I never thought I wanted to do this, now I don't know what to think' feeling."

Raised in the suburbs outside Fort Lauderdale, Fla., ("It was pretty boring," he says), Barry grew up inspired by legendary comedians such as George Carlin, Bill Hicks, Steve Martin and Andy Kaufman. He also was a drummer for a rock band called the Chant.

Early on, he began writing letters to David Letterman, two of which were read on-air. Flash forward two decades and thousands of unfunny small club shows later: Barry recently performed on Letterman's show and occasionally sits in on drums with indie rockers Yo La Tengo and Superchunk. He's right at home when joking about anything music-related.

Barry is touring the South with two friends: co-headliner Neil Hamburger and opener Brendon Walsh. This will be his first time visiting Richmond. Much of his material is worked out onstage, one reason he prefers no video recording at shows.

"I don't know how you can enjoy a show with your hand up in the air the whole time anyway," he says. "But I get antsy writing, so I like to just talk stuff out onstage."

Try to find out what really informs his sense of humor, deep down, and you're likely to get a polite but blunt rebuke. He's always been a private guy, he says. Most artists don't like to over-explain things anyway.

"I haven't had a particularly rough life or anything. ... I'm too dumb to talk about politics, and I just don't want to get too personal," he explains. "People have a lot of preconceptions [about comedians]. They either think we're all sad, or we'll be 'on' all the time. Some get angry if you don't entertain them on the street. ... I don't know that comedians are any sadder than any other job that I could pick at random." S

Brendon Walsh, Todd Barry, and Neil Hamburger, in that order, bring the Summer Value Tour to Gallery5 on Saturday, Aug. 18, with shows at 8 and 10:30. Tickets are $20-$22 and are available at bit.ly/haharva.