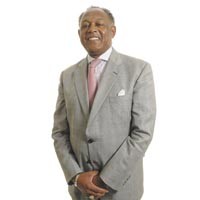 When Dwight C. Jones was growing up in the 1950s, he ran deliveries from Riebstein's Pharmacy out to the historic addresses near his family's home. Technically within the city limits, Philadelphia's Germantown neighborhood had a suburban rhythm, like the mostly white, Jewish high school Jones attended. His father preached at a small Baptist church across town in South Philly.
One of the houses Jones delivered to was the home of Leon Sullivan. Towering at 6-foot-4, Sullivan ran the Opportunities Industrialization Center, a life- and job-skills training program. Sullivan also organized boycotts of the Tasty Baking Co. over objectionable hiring practices. A decade later, Martin Luther King Jr. modeled his economic tactics on Sullivan's work.
Jones, 60, recalls the excitement and energy around Sullivan's causes. His father, who preached the theology of salvation, participated in the boycotts. For the younger Jones, Sullivan injected a sense social justice into his view of Christ and the Bible.
Growing up as a preacher's kid came with expectations and responsibilities. Jones comes from a long line of preachers' kids, and he's grooming one of his sons, Derick, to take the reins at First Baptist Church of South Richmond.
Preachers' kids sometimes buck expectations. Growing up in Philly, Jones' brother rebelled by fading out of Sunday's daylong ritual starting with a full sit-down breakfast rolling through three services and dinner at the church. Perhaps it's a more extreme display of rebellion that led Jones' son Brent into a drug problem and a jail term that will end next year.

Virginia Union University drew Jones to Richmond. A shaky reader as a youth, he had to work overtime to catch up on his remedial skills, but it was an eye-opening experience nevertheless.
The liberal-arts college exposed him to high culture through visiting opera and ballet performances and, perhaps more importantly, to a pantheon of accomplished African-American role models. He had a job driving around the university president, Thomas Henderson.

After graduation he attended seminary at Virginia Union and started at a small church in the West End. Then, at a precocious 25, he was called to be the pastor at the historic First Baptist Church on South Side. The church sits a block off a Hull Street, a hardscrabble block that has fallen from its vibrant days decades earlier.

In 1969, when the city moved from an at-large election scheme to a ward system of City Council, Jones managed the campaign for the first elected representative from the city's 8th District. Later, he served on the School Board back when it was still appointed, rather than elected.

He continued his social justice mission by working to establish a local soup kitchen, the South Richmond Senior Center, by working with another church north of the river. He launched a nonprofit development company to help revitalize Hull Street, an effort that has been met with mixed results. In 1997 a group of his parishioners filed suit, asking him to share financial details of the church. They settled in mediation.

In 1993, Jones won the seat in the House of Delegates vacated by Larry Wilder, Mayor L. Douglas Wilder's son. He's held it ever since. He serves as chairman of the black caucus and sits on the committee that approved Richmond's shift to an elected mayor, a proposal he vocally condemned as half-baked from the dais.

Although he's a decidedly South Side politician, he hangs out at a Fan grill, Davis and Main, where a chalkboard rendering of the streetscape in front of the restaurant includes a Jones for Mayor endorsement on the sandwich board, and the staff keeps his martinis in the freezer when he steps out to take calls.