An English soccer player finds that the Richmond Kickers play a tough version of American Idol. 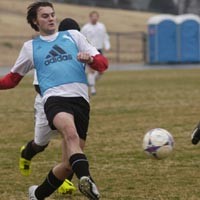 With one guaranteed contract on offer, the tryouts are basically "American Idol" for soccer players, only without the annoying hair-gelled host. Eighty-eight hopefuls have come from all over the United States and beyond to show what they can do, but instead of Simon, Paula and Randy, they're here to impress the Kickers coaching staff, led by Head Coach Leigh Cowlishaw.

Originally from Burton-on-Trent, England, Cowlishaw also crossed the Atlantic to pursue soccer. "I came over here to the University of Richmond on a soccer scholarship back in 1990," he says. "Then the Kickers began in 1993, so I just sort of rolled straight into it." After playing for the team, he took over as head coach in 2000, so if anyone knows about being an Englishman in American soccer, it's Cowlishaw.

"I think you'll find the American player is not quite as tactically aware, but athletically they're second to none, and technically they're very, very good," Cowlishaw says. "There's a huge misconception back home [in England] that you can just walk over here and make a team. That's really not the case."

I was hoping to prove him wrong.

As each player enters the locker room, he registers, receives a numbered jersey and takes a seat. The atmosphere is tense. Locker rooms are normally filled with banter, but this morning there's only a nervous silence, no one keen to make eye contact with anyone else. Stacks of bottled water and caramel energy bars hint at the grueling day ahead.

Kickers General Manager and Vice President Paul Sterbenz offers a pre-tryout pep talk: "We expect you to go out there and play hard. But don't try and kill each other." We're split into four groups, and with an irony lost on no one, we're sent out into the wind and rain to "warm up."

"Seems you've brought the weather with you," Cowlishaw kids me.

Once outside, the players begin to talk. There are players from Virginia Commonwealth University and the University of Richmond, as well as guys from one coast to the other. Some are from even farther afield. Mac Kandji, a tall, lean 20-year-old originally from Senegal, plays soccer at Georgia Military College. He seems confident. "I'm a forward or I can play as an outside midfielder," he says. "But I score goals." Tom LeTissier, an 18-year-old goalkeeper, is from England.

"My coach back home thought there would be opportunities for me over here," he says.

The morning begins with a small-sided possession game, where each player can take only two touches of the ball before moving it on. The ball moves quickly, as if in a pinball machine. Kandji and a few others excel. Me, not so much. Though I chase the ball doggedly, I always arrive a moment too late.

Based on what he's seen, Assistant Coach Jesse Myers picks seven players from our group of 12 to compete against one of the other groups in a game. I don't make the starting seven, which basically means I haven't impressed.

The coaches watch the games closely, clipboards in hand. When a player catches their eye, the clipboards are studied and jersey numbers are matched with names.

After 15 minutes I'm subbed in and make a promising start. With my first touch I "nutmeg" an opposing player - playing the ball through his legs. It's a move that only the most talented and confident players pull off. It's also a complete accident, but I'm the only one who knows that. I look over to see if the coaches noticed, but the clipboards haven't moved. It doesn't matter because with my next touch I lose possession cheaply and the opposition scores.

After a lunch break comes the big test - the afternoon game. It begins with a now-familiar disappointment: not making the starting lineup. So I resign myself to looking as professional as possible while standing in the rain. An injury to one of our players brings my chance to impress. Again, it's a little faster than I'm used to, but I manage to get involved. One nice pass elicits praise from a teammate, though his shout of "Good ball!" would be more encouraging if he didn't sound so surprised.

A corner kick is my big chance. I'm tall, so I should be able to meet the high cross and score with my head.

The high ball comes over and as I rise at the far post, it feels preordained. I head the ball over and wide of the goal, and once more the clipboards remain undisturbed.

When the game's over, we retreat to the warmth of the locker room. One exhausted player devours a caramel bar. "How come these things tasted like dirt this morning, but now they taste like the best thing in the world?" he asks. The players are more relaxed, especially those who know they've impressed.

Then Sterbenz has some news for us. With rain, and possibly even snow, expected during the night, the field will be unplayable tomorrow. But a select group will be invited to attend a session at the indoor complex for further assessment. Of these players, between five and 10 will then be invited to train with the Kickers' first team. Those who have made the cut (including Kandji) are spoken to privately. The rest (including me) are thanked for our efforts and sent home for a hot shower.

Later, Myers tells me he received several phone calls from disappointed players. They complained that "it wasn't fair," he says, or that they "didn't get enough playing time." The coaches have been doing this for a long time, though.

"It's not rocket science," Myers says, "and when it's your job you develop a trained eye." The disappointed players are let down gently but firmly. "We give it to them honestly, but in a tactful way," he says. "A lot of guys want a career in soccer, but the reality is they're just not good enough."

Which brings us back to me.

"Tactically and positionally, you were better then most," Myers tells me. "Technically, though, you're probably not good enough."

There it is, gently but firmly. S