During a global pandemic, the farmers don’t stop. 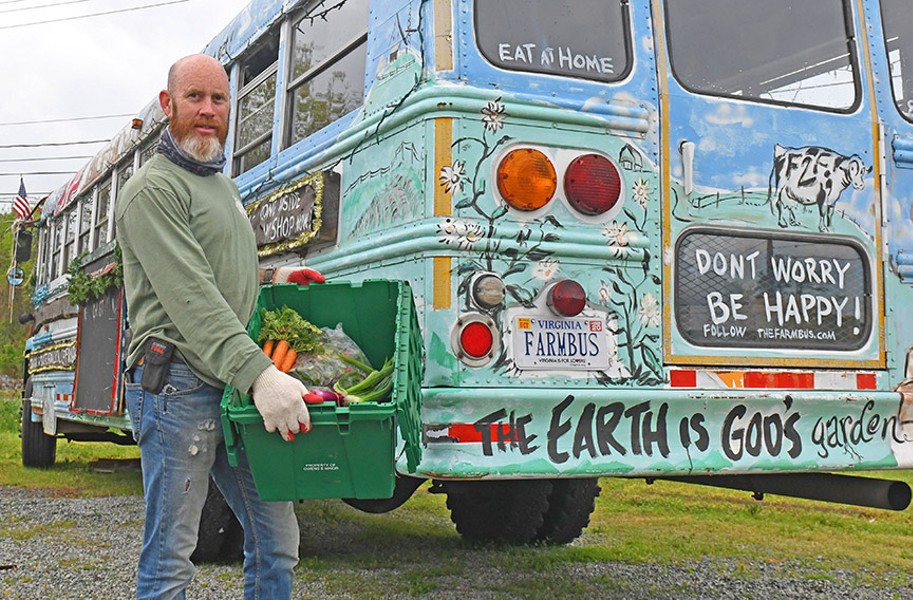 As of Friday, there were more than 4,000 confirmed coronavirus cases in Virginia, with just over 100 deaths. More than 300,000 people have applied for unemployment in the state. People are baking their own bread, designing their own Zoom backgrounds and building their own garden beds. It’s a new world, replete with face masks and fear. But farmers are still farming.

“We raise 2,500 ducks every year, and 90% go to restaurants,” says Joel Slezak. “My sales went from 12 restaurants to two restaurants overnight.”

Like all those who have tilled the soil since the beginning of time, Free Union Grass Farm co-founder Slezak is at the mercy of Mother Nature. And market demands.

Free Union raises ducks, chickens, hogs and cows on over 250 acres of land and woods in Albemarle County. The outbreak of the coronavirus has forced the farm to alter its model — people don’t want to attempt duck a l’orange on their own. “We’re raising a lot more chickens,” Slezak says. His consumer base is now the home chef, the one who is determined to stay as safe and socially distant as possible by making three square meals a day from scratch. “Our retail sales are up 300 percent,” Slezak says.

That doesn’t mean that the farm is in the clear, of course. Or that it’s even making much of a profit. Smaller family-run farms that primarily distribute their products within 100 miles may be in a prime position for now, as folks continue to operate in stock-up-and-survive mode. But Slezak had to cut half his staff, the part-timers who don’t reside on the farm, in order to keep everyone healthy. Which means the skeleton crew is working four times as hard but “not necessarily making more money.”

Plus, there’s the issue of raising a living thing — you can’t just snap your fingers and a grass-raised chicken appears. “We have back stock but we will probably run out in May,” Slezak says.

Even as the sex appeal of the homesteading movement continues to draw in those who eschew the hustle and bustle of the modern day, the facts of farming on a large scale remain. Charming a tomato plant out of the mercurial ground is not easy. It’s unforgiving and brutal — and charming thousands of tomatoes? Sisyphean for most.

While the people who successfully foster our nation’s food supply have proven to be among the most resilient of workers, they’re still incredibly vulnerable. A January Reuters article reports that U.S. farm bankruptcies hit an eight-year high in 2019, noting that “nearly one-third of projected U.S. net farm income in 2019 came from government aid and taxpayer-subsidized commodity insurance payments.” Family-farmer bankruptcies have “steadily increased every year for the past five years.” All this before an unprecedented global pandemic hit.

Virginia Foodshed Capital fills the gap for farmers looking for microloans. Between their “profit and loss statement, revenue and debt” these small farms are often unattractive candidates for standard bank loans. Currently, the nonprofit offers $2,000-$10,000 loans with no interest, with hopes to expand to $15,000-$40,000 loans with a lower than market interest rate attached. During the pandemic, Brahm says it indefinitely has paused all loan repayments for farmers.

Over the past few weeks, shoppers have realized that it is no longer easy to pop into your local Publix for the ingredients you need for dinner. As large national and regional grocery stores struggle during the pandemic to restock their shelves with globally sourced dry goods, produce and meat, local farmers have seen an uptick in CSA subscriptions. The slightly more expensive locally grown veggies carefully tended to by the small family-run farm down the road are no longer a fun impulse buy. They’re the answer.

In an April 7 Tuesday report Farm Bureau chief economist John Newton writes that future market prices for livestock have declined more than 30 percent. Milk prices have seen a 28% decline. How long will the decreased value of these products persist? Newton writes that as more information about the virus emerges, the prices will certainly change. Whether the value will decrease or increase remains to be seen, but one thing is certain.

“As businesses out there are shutting down, farmers are still out there farming,” Brahm says. “The importance of that cannot be overstated.”

Richmond Farm Bus founder Mark Lilly understands and deeply appreciates the role of the farmer. He’s hoping, if anything, a global pandemic will wake up the rest of the world to this realization, too.

In 2009 while studying at the University of Richmond, Lilly researched one very specific — now prophetic — topic. “My topic was hunger and severe famine in the Western developed nations,” he says. “I predicted there would be a deliberate pandemic. It didn’t surprise me when it happened.”

Lilly admits we cannot prove the deliberate part, but he was prepared for some kind of disaster all the same. In 2009, Lilly took the concept of a farmers market and “smashed it” into a school bus. Today, folks can sign up for his CSA or shop a la carte at the market, parked at 2817 Mechanicsville Turnpike, Wednesdays - Saturdays from 10 a.m.-6 p.m. Pre-made boxes cost $30.

“My MO is to help and support local farmers,” Lilly says. “I hate what is happening, but it’s getting people back to basics and to the food and the land.”

Lilly drives all over the state, collecting things as varied as honey and trout from more than 20 farmers to sell at his weekly market — he’s their advocate and marketing team all rolled into one. With seasonal farmers markets and institutions closed all over the state, many small farmers have had their regular cash flow completely truncated. Lilly says that the state’s meat processors are backed up, and eggs are hard to come by. “I think people are starting to realize how hard it is to get local food.”

And even harder to grow it.

A windstorm knocked out the power at Free Union Grass Farm on Thursday afternoon. Farmer Slezak is unfazed. He’s not daunted by the pandemic either — well, at least he’s putting on a brave face. Sure, he’s sitting on $20,000 worth of frozen duck, but he’s used to hard times.

“Two years ago it rained 84 inches, the average rainfall is like, 34,” Slezak says. “It rained 11 inches in one night, the entire universe we had created flooded, I was running out in a pair of shorts trying to save 2,000 chickens that we had just put out to pasture. It didn’t even feel abnormal — that’s just what happens to farmers.”