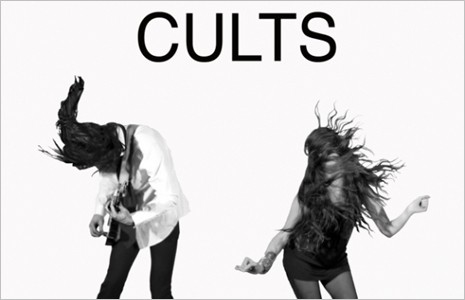 A little more than a year ago, Brian Oblivion and Madeline Follin were two New York University students tweaking home demos during their free time. Like most young bands, the duo had endured failed attempts at success and began to question the legitimacy of pursuing a career in music. Their story takes a turn unlike most Manhattan upstarts when they find a devoted following after uploading just three songs to do-it-yourself site Bandcamp that found an audible sweet spot between the shimmery, lo-fi pop of the Shangri-Las and the archived recordings of Jonestown leader Jim Jones.

The bliss of their first bus tour -- which includes a stop at the National - is now upon them and Brian Oblivion explains that celebration of Cults' killer year comes in both the form of Trader Joe's shopping sprees and writing new songs.

Style Weekly: So, I hear you're late to this interview because of a Trader Joe's stop?

Brian Oblivion: Yeah, it's our first bus so we're going a little crazy filling it.

2011 has been outstanding for Cults. What's different for you all now?

Our band has ascended maybe quicker than most do, but it has been gradual for us. We started off playing to 150 people as support acts and those supporting tours got bigger. Now we are headlining on our first bus tour. It's been a steady climb, not a rocket to the moon. It's better that way.

You guys were even blessed by the picky folks at Pitchfork as best new music earlier this year. How important are reviews to you?

Personally, I don't read them and didn't read a single one for this album. I realized early on when you read stuff about your music, even if it's good, it affects you in a weird way. It's like seeds being planted in your brain. Sometimes they come out as beautiful little flowers and other times, scary thorn bushes (laughs). If you are writing a song and you think back to where some guy said "they should do more of ..." you kind of second guess yourself. I realize they are really important though to get people to your shows and raise awareness.

Your launch pad was Bandcamp. How important is the digital arena to what you do?

It's everything really and fucking amazing. We're having a dream rise to the top because bands can just put songs out and people share them with each other. The radio seems more geriatric everyday. Being an independent band without a website would be like going to school with no clothes on. It's not going to work out for you.

It worked out well for you though. Talk to me about Cults' musical background?

Madeline's is more interesting than mine because her stepdad was one of the founding members of White Zombie, Paul Kostabi. Her mom was Dee Dee Ramone's art dealer. She grew up in New York with a bunch of punk and goth legends-to-be. Music was always around her, but because so many people in her family played she didn't really have the courage to try it. When we went up to her parents to record these songs, it was kind of a nerve wracking thing. I just played in weird math rock bands in high school. I dropped out of school and moved to New York when I was seventeen to play in a band. It went horribly. We ran out of cash and had to move away from New York. Both of us had a secret desire to really make it happen though, but didn't think we were good enough.

You've said before that you want to write "classic songs." What are the key components of songs like that?

The epitome of a pop song is music you can use or music with a purpose, even if that purpose is just to make you dance. I personally think that's kind of a boring purpose. Among the best are things like Jackson 5 or Joy Division songs that are there to make you feel a certain way. Everyone hears them and it creates a moment that you want to be a part of. Classic songs bring something out that is familiar among all people, but feels new at the same time.

What are two of your favorite classic songs?

Roy Orbison's "Crying" and Sonic Youth's "Do You Believe in Rapture."

Your debut hasn't been out very long, but I'm curious if you are writing new stuff?

Now that we have a bus, we're doing a lot more demos. We've done some songs that are all electronic with no guitars. It's kinda like Nancy Sinatra meets Squarepusher. Then there are some others that are definitely more guitar songs. Where the last record was more '60s, this one is going to be more '70s.

You guys were film-school kids, so let's talk about the video for "Go Outside." Whose idea was that and was it?

We started our own video for "Go Outside" and it went horribly. We spent a bunch of money and were never happy with it. We compromised and got some ideas from outside directors. We walked into the video commissioner's office, who is a guy who works for our label, and he said he had about eight ideas. One of those ideas according to him was, "fucking insane, but so cool that we're probably not going to be able to do it." He wasn't going to even tell us, but we made him tell us that one first. And that's the one we went with.

Was it a licensing battle to get all of that old footage of real cults?

The guy who runs the archives for the Jonestown Cult has been super cooperative with our band and really cool. He gave us everything for free and our video recently went out in a newsletter to survivors.

Do you remain fascinated with these groups or are you just tired of talking about them at this point?

It's not so much about specific groups of people, but more so the ideology. Believing that you don't have to conform to other people's standards or visions of how your life is supposed to go will always be a fascinating thing. I'd be lying if I said there wasn't a little bit of wonder about living such an extreme lifestyle like a cult. At the same time, we all know that's bad. It starts off like the best time ever and then things just unwind.