A writer attempts to find the best dive bars in town.

How do you define a dive bar? Is it simply a shabby place with cheap drinks? Can it have good food? Or, like pornography, is it a case of knowing it when you see it?

Regardless of the answers, I recently set out with a rotating cast of friends to find the best dive bars in town. This list is by no means exhaustive, but hopefully represents a smattering of what Richmond’s less refined watering holes have to offer those in thirst. Time to ice my liver. …

Not every bar can lay claim to serving as the setting of a movie based on a Garth Brooks song, but Bubba’s Bar and Grill can. In 2010, Bubba’s played itself in the Lifetime movie “Unanswered Prayers,” but the bar certainly hasn’t let fame and fortune go to its head. Though it completed a renovation in early 2020, Bubba’s is still a smoky watering hole with an obscenely cheap happy hour, two pool tables and lots of Queen “skill machines” – or at least, before the machines became illegal July 1. The self-professed “home of country music,” Bubba’s is a popular karaoke spot on Saturday nights.

Located in the heart of old Midlothian, Caddy’s is a wood-paneled public house with a U-shaped bar and an outdoor patio that faces onto Midlothian Turnpike. On a recent visit, the place was packed, with an indoor cornhole game taking place and what I have been informed was a Virginia Baptist homecoming-style buffet, comprised of meatballs, cheese and both potato and macaroni salads. The place celebrated its 20th anniversary last month.

At a strip mall in western Henrico, Daddio’s Grille offers an inviting atmosphere, pool tables and both smoking and nonsmoking sections for patrons. The bartenders are friendly, there’s a patio with picnic tables in the back, and the numerous TVs offer the ideal location to watch the Phoenix Suns beat up on the Milwaukee Bucks in the first game of the NBA Finals.

This establishment on Lakeside Avenue is known for its country karaoke and lack of pretense. Signs at the door inform us that biker colors aren’t allowed and that anyone who fights on the premises will be barred from returning forever. Lakeside Tavern features a smoking lounge in the back and a pool table, but the real draw is the karaoke, which takes place every weeknight. On a recent visit, the emcee informed the crowd that a record 44 people had signed up to sing the previous Friday. The singers all seem to be regulars who belt their songs with familiarity.

William, a friendly man who looks like Alice Cooper, introduces himself at the bar. Turns out, he’s the singer in an Alice Cooper cover band, and says the best thing about Lakeside Tavern is that it’s filled with “real people.” After I’ve left, a friend informs me that they’ve got good Korean food and special wings that are worth selling your signed original pressing of “School’s Out” for. I’ll have to return.

A stone’s throw from Bubba’s on Williamsburg Road, the Last Stop Bar & Grill offers cheap drinks, two pool tables and a collection of Queen machines (again, at least, before they became illegal). Tammy Jo, our incredibly nice bartender, serves a mean Orange Crush as bouncy country tunes like Barbara Mandrell’s “Sleeping Single in a Double Bed” play on the stereo. Signs advertise a happy hour that runs from 8 a.m. to 6 p.m., and a Friday and Saturday happy hour that charges $2 for rail liquor. Confederate flag count: Two. 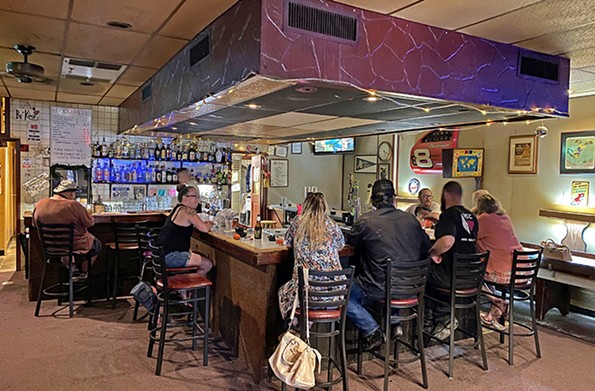 This wood paneled, smoky dive bar on Forest Hill Avenue is in its third generation of family ownership, and, according to our bartender Austin, has served drinks and good times since 1971. The walls are decorated with pennants for old sports teams like the Richmond Braves, and the entrance displays pictures of deceased regulars. There are darts, pool and table shuffleboard for the competitively minded. There’s also karaoke, which is frequented by many tone-deaf singers. In case there was any questions if this place qualifies as a dive bar, the Wi-Fi password confirms it: divebar1.

This haunt off Forest Hill Avenue is a dart player’s paradise. Thirteen boards line the walls in two rooms. The diverse clientele seems close-knit, and the place is decorated with sports ephemera and some really great neon, including stained glass neon on one side of the bar. Stephanie the bartender makes a point of introducing herself. Behind her, a shelf on the bar holds cigarettes for sale.

This hole in the wall in a strip mall down Patterson Avenue appears largely unchanged since it opened in 1958. According to an old Style article, Rose Marie originally opened on Cleveland Street in the Museum District in 1938. It also says it moved to the current location in 1959. Squirrel, a gregarious man who does flooring, says that the bar was going to close a year ago, but that Lee, a regular, couldn’t let that happen and bought the place. If you’re nice to Lee, he might just show you some magic tricks. Next door is an event space that can apparently be rented for free. This is a go-to bar for West End restaurant workers when they get off shift. Special shoutouts to Miguel and Marshall. According to the sign, this is “Where Friends Meet.”

An Irish dive bar that began its life as an offshoot of O’Toole’s, the Shamrock Pub isn’t lacking in character. This wood-paneled place has lots of space, graffiti on the walls and a broken AC. The two pool tables are so old that the coin slots don’t work anymore. To use them, you pay the bartender to unlock them: unlimited play for $2.50 per half hour. Avoid the Irish Trash Can, a gross green cocktail that’s served with an upended can of Red Bull sticking out of the top.

Sharing a shopping strip with a flea market, Sportsman’s Restaurant and Lounge is a smoky large bar with dartboards, pool tables, indoor cornhole and a player piano that appears to be broken. It also features framed portraits of five Confederate generals and the hood of a stock car with a Confederate flag on it. Confederate flag count: Too many to count, including on the Sportsman’s Grille T-shirts and tank tops sold behind the bar.

Near Route 288 and Hull Street Road in the Market Square Shopping Center, Taylor’s Restaurant has dart boards, pool tables and a smoky interior, but its distinguishing feature is its large outdoor patio. Built out onto the sidewalk of a strip mall, it’s actually one of the better patios in the region, even sporting a water feature.

This New Orleans-themed gay bar on Forest Hill Avenue is one of the more intriguing bars in the city. Here, the NOLA decorations compete with posters for “Star Wars,” “Star Trek,” “Doctor Who” and the “Lord of the Rings” franchises. People at the bar play video games with wireless controllers. A friendly place, Thirsty’s Bar & Grille gets rowdy at night when the karaoke starts.

The upscale nature of some of the liquor would seem to pull Thirsty’s away from contention as a dive, but the Jell-O shooters and frozen drink machine behind the bar say otherwise. One of the frozen drinks has an artificial lime flavor and is decorated with green gummy crocodiles, a cocktail umbrella and a dollop of whipped cream. Its name? The unprintable bodily fluid of a certain amphibious Muppet. It ain’t easy being green. …