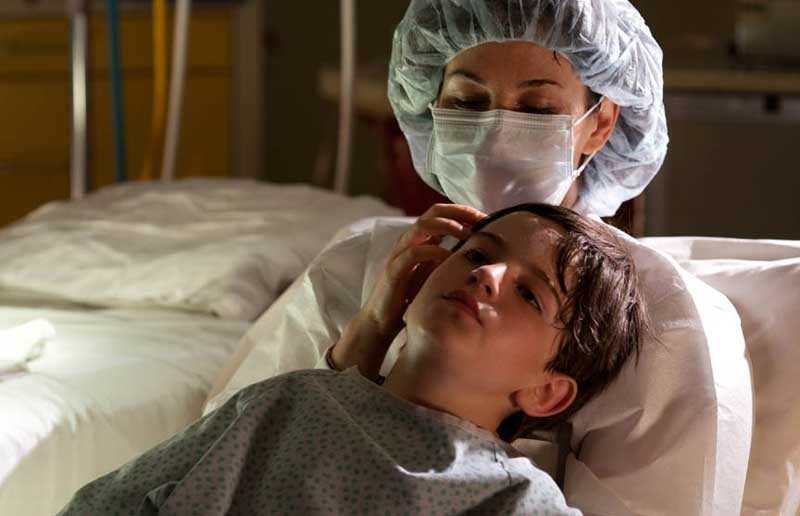 If you're going to battle the dark personification of disease, it's nice to know that hobbits, a Goonie and a bona fide Ghostbuster have got your back.

Clay Beabout, 14, has vater syndrome, a genetic disorder represented by multiple associated birth defects. In Clay's case, that includes being born without five ribs and having a displaced diaphragm and three curves in his spine, not to mention pulmonary and cardiac problems. He has four prosthetic titanium ribs. By the time he was 13, Clay had been through 39 surgeries, including open heart surgery when he was just three months old.

However, Clay also could say he had written and acted in a film that stars both Sean Astin from "The Lord of the Rings" trilogy and Ernie Hudson of "Ghostbusters" fame.

Clay's film, "Deep Blue," is a production of the Make a Film Foundation, founded and run by Richmond native Tamika Lamison, formerly Miss Black Virginia and now an actress and director based in Los Angeles. The film premiered this year at the Writers Guild Theater in Los Angeles at a benefit screening hosted by Benjamin Quddus Philippe, former host of MTV's "Total Request Live."

"Make a Film Foundation is about giving children with life-threatening medical conditions the opportunity to use filmmaking to give themselves a voice and raise awareness of what they go through," Lamison says.

A 1987 Huguenot High graduate, Lamison performed in the late Ernie McClintock's Richmond-based Jazz Actors Troupe and was featured in "Shear Madness" at the Kennedy Center after she graduated from American University in 1991. In addition to making numerous commercials, she directed the first season of BET's reality TV series, "College Hill."

An action-film buff living in Kansas with his parents and three siblings, Clay had made two requests to the Make-A-Wish Foundation that fell through. Then his mom found out about Lamison's Make a Film Foundation.

"This blows away every Make-A-Wish that was ever made," says Amy Beabout. "What it has done for my child is indescribable."

Clay's filmmaking mentors have included the directors of the Oscar-winning "Little Miss Sunshine," and "Lord of the Rings" star Elijah Wood, who offered Clay acting advice. In "Deep Blue," he plays himself, going through a life-or-death surgery, while his parents, played by Astin and Natasha Wagner (daughter of the late actress Natalie Wood), wait nervously nearby. ("I was pretty amazed to be in his presence," Clay says of Astin. "I watch 'The Goonies' a lot.") As he goes under for the surgery, Clay is transported to a dream realm, where he battles Lord Vater, the personification of his genetic disorder.

"I want it to get an award so I can make more movies," says Clay, who dreams of adapting the Hardy Boys books to the big screen. "I'd like to be a director. In my family, my mom calls me the ringmaster out of the kids, the one who tells the jokes and is really like the leader of everyone." S

To see a trailer of "Deep Blue," visit makeafilmfoundation.org.