A new book and documentary at Virginia Union University look to find solutions for race-based discrepancies in school discipline. 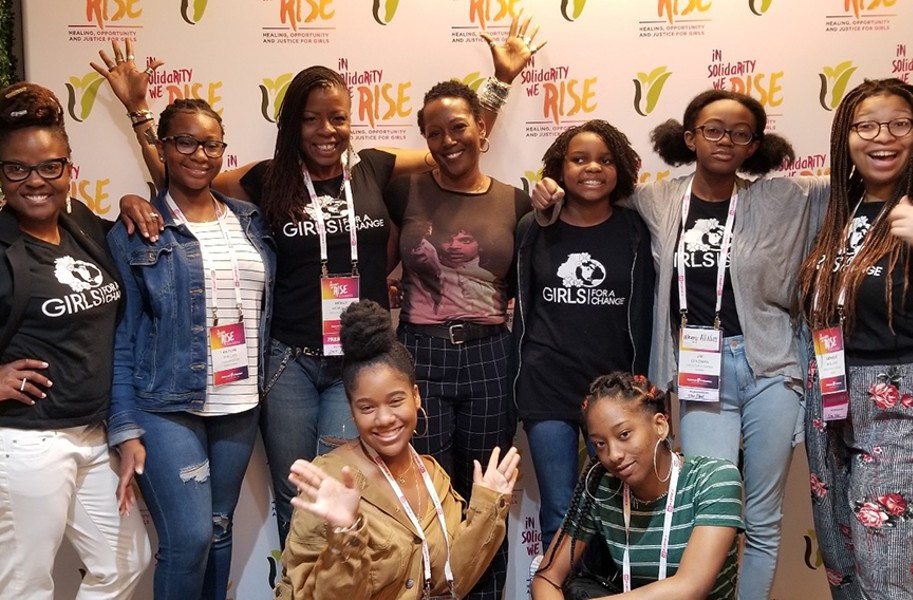 Girls for a Change President and Chief Executive Angela Patton, at far left, and author and filmmaker Monique Morris, at center, are pictured with local members of Girls for a Change, a nonprofit dedicated to changing the lives of black girls.

A report from the Legal Aid Justice Center earlier this year found a 60% increase in criminal charges against black girls in schools over the last three years, for everything from cutting the lunch line to running in the cafeteria.

It’s not just happening in Virginia, either. Monique Morris, an author, scholar and filmmaker, breaks down the causes behind the national crisis of black girls being removed from school in her new documentary, “Pushout: the Criminalization of Black Girls in Schools.”

In limited release, the film is coming to Richmond on Nov 12 for a screening at Virginia Union University following a rally by Girls for a Change, a local nonprofit dedicated to transforming the lives of black girls.

Girls for a Change President and Chief Executive Angela Patton says that after the film, girls, educators and policymakers will join Morris for a conversation and to draft an action plan.

“They want to sit at the table with these people and have a real conversation,” she says. “We want to make sure something happens.” The group has enlisted Ebony Walden, an urban planner and facilitator who specializes in community meetings, to help.

Criminalization and excessive punishments drive black girls out of school, Patton says, adding, “They don’t feel valued, and who keeps going to a place where they aren’t valued?”

She realized how urgent the problem was when she heard about situations at school that still sounded like those from her own childhood: “They’re the same stories I lived, and I’m nearly 50 years old. It’s been going on too long.”

In Chesterfield County, where Girls for a Change member Solange Oliver attends high school, cultural expression is one of many acts for which black girls are punished, she says.

“I wore a head wrap to school, because it’s culturally significant to me,” she says. When she explained that to school administrators, she says, “they just put me in in-school detention.”

Many of her classmates have had the same experience, even during Black History Month, and they’ve also been punished for their body shape, she says, pointing to a documented disparity in dress code violations. “It’s very biased against black girls. We are five and a half times more likely to be pushed out of the classroom than our white counterparts” for clothing that white girls wear without penalties, she says.

Morris says black girls often are punished for their hairstyles, and she describes head scarf policies as an extension of the control school authorities try to exercise over black girls’ bodies.

“Look at the control and regulation of hair,” she says. “Girls are being told they can’t be who they are. It’s not even about a threat they could pose to the learning environment.”

She was inspired to write her 2016 book, which shares a title with the film, because “there was so much focus on boys, and everyone just assumed the girls were fine,” she says.

Her research showed the opposite. “Girls were facing even more problems than many of their male counterparts, especially black girls.”
The problem she sees is a system that doesn’t understand black girls or accept them.

“We need to understand this not as black girls acting out more than white girls, but understand the ways their trauma is not seen or related to, the way adultification [which she defines as when youth are prematurely and inappropriately exposed to adult knowledge] affects them, how dress code policies are impacting them. There is a culture of erasure around their experiences that leaves them at increased risk of contact with the juvenile justice system.”

All three agree that the problem is present even when educators and administrators are black.

“Representation matters, but when it comes to black teachers, it’s hard for them to advocate for students who look like them.” That simply isn’t their job, she adds. “They’ve been instructed to police us in certain ways, and it’s been normalized.”

Patton says even for her, it’s an impulse she has to resist.

“I’ve been called an angry black woman, but I can have those same feelings about a black girl. It’s something that’s taught to us, even as a black person,” she says, explaining that systemic racism isn’t just individual bigotry or racial animosity, but rather a system that perpetuates itself through policies and structural decisions. But just because the problem predates our current generations, she says it’s incumbent on society to change it. “We didn’t start this problem, but we have the power and the responsibility to fix it,” she says. “We need to do things differently.”

To do things differently, people need solutions, Morris says, and that’s at the heart of her latest book, “Sing a Rhythm, Dance a Blues: Education for the Liberation of Black and Brown Girls.” She describes the “Pushout” documentary as a synthesis of both books. “We certainly share what the issues are, but we also show ways to interrupt that process, and make schools part of the tapestry of healing,” she says.

A typical post-screening conversation usually centers on freely offered admissions of past failures, and a collaborative discussion of how to do better next time. If the scale sounds small, though, Morris says it’s the most effective approach possible.

“People think about this at a national level, but the execution of educational justice is a local practice,” she says, and the solution is local. “What we do with our young people in our communities, in our classrooms, is important. It matters.”

The rally to end push out will be held at Virginia Union University’s Living and Learning Center on Tuesday, Nov. 12, from 5:30-9 p.m. The event is free.