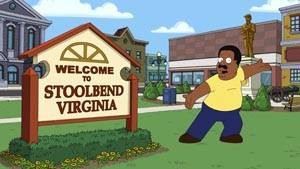 >Mike Henry describes Stoolbend, the primary setting of “The Cleveland Show,” as “a town that's lush with a river running through it,” noting that a lot of the businesses are housed “in old colonial buildings that have been refurbished.” To him, there's no doubt: “Stoolbend is Richmond.”

Using photographs and video of the city taken by Henry's brother as reference material, Richmond was forged in animated form. While no settings are directly lifted from real life, local cues are strewn about the series: Stoolbend's town square “has the feel of Shockoe Slip.” The Brown family goes tubing down a river inspired by the Pony Pasture rapids. And one of Cleveland's neighbors lives in a house similar to one that Henry's mother occupied on Libbie Avenue.

Stoolbend's moniker, however, doesn't come from an inside joke for Richmond residents. “It's just a fictitious name that we gave it based on a friend of mine going to the bathroom off a fishing boat,” Henry says.