Deconstructing Nancy: A classic comic from the early 20th century teaches the art of subtraction 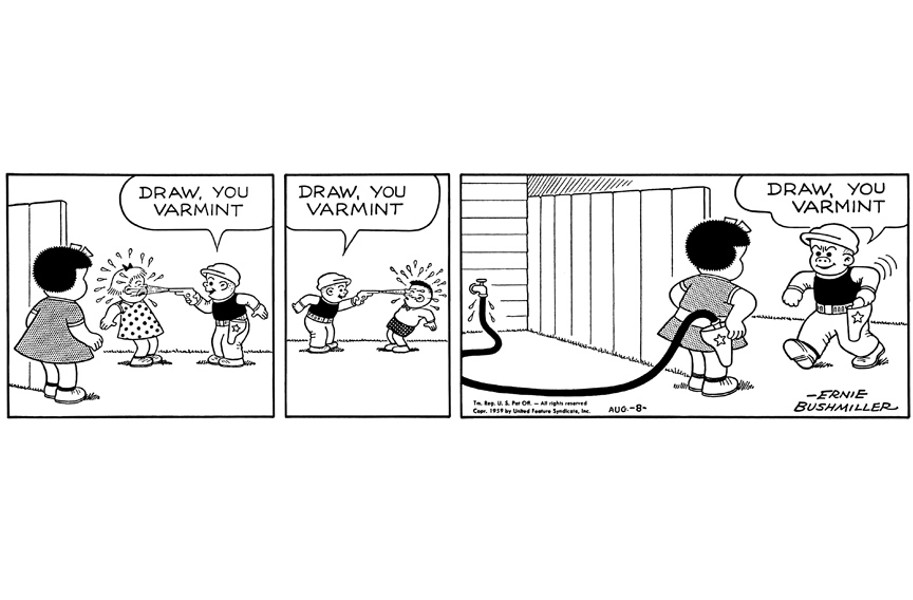 This “Nancy” strip from Aug. 8, 1959, looks simple, but it has been deconstructed in enough ways to form the basis for an entire book.

In the pantheon of great comic artists — including such personalities as Will Eisner, Walt Kelly, Harvey Kurtzman, Winsor McKay and Wallace Wood — few would consider Ernie Bushmiller and his fireplug-shaped Nancy figure to be among them.

But on April 2, artists and instructors Paul Karasik and Mark Newgarden will make the case that Bushmiller — the admitted Lawrence Welk of comic arts — is worthy of inclusion with the best while presenting their book "How to Read Nancy" at Virginia Commonwealth University's James Branch Cabell Library.

"It was about iconography and readability," Newgarden says in a recent interview about Bushmiller's "art of subtraction." "Nancy was designed simple, to go down fast, to be read faster and before anyone else's strip."

Indeed, Bushmiller's strip "Nancy" was considered for 50 years to be "the stodgiest, squarest comic strip in the world," he says. But hidden behind that steely, architectural precision, Bushmiller mastered the comic form by breaking it down to its purest essentials in his daily quest of a solitary goal: the gag.

"Little kids who have just staggered through first grade tell me they can often get the point of a Nancy gag without bothering Pop to spell out the story," Bushmiller happily admitted in the Sept.18, 1948, issue of Collier's Magazine. And in today's chaotic landscape of Manga and other complex narrative comic forms, the archetypal, ascetic world of Nancy, Sluggo and other walk-on characters may seem to be created not just for first-graders, but for the dumbest person in the world. That's because it was.

Bushmiller took over the Fritzi Ritz daily comic from Larry Whittington in 1926 and continued her as a gold-digging flapper until 1938, when he unwittingly introduced her amorphous niece, a girl between the ages of 8 and 10 who sported a snub nose and a thatch of cactuslike hair. Soon, Nancy and her somewhat destitute pal Sluggo took over the strip and "Aunt" Fritzi was shunted into the background.

"The intent of Nancy was to amuse for 10 seconds — that's it," says VCU English professor Tom deHaven, who with comic arts professor Kelly Alder is bringing Newgarden and Karasik to VCU. "Look at the organization of the visuals. Sluggo can be smart one day and stupid the next, it didn't matter. It was all done in service of the gag."

"It's deceptively simple," Alder says. "It's the mechanics on display that makes it successful. Even [Newgarden and Karasik] say it's sublime in its stupidity."

In their book "How to Read Nancy" Newgarden and Karasik have taken a single Nancy strip from Aug. 8, 1959, and deconstructed it about 45 different ways to show that Bushmiller was unparalleled in his obsessive, blueprintlike pursuit of a gag. Every line, crosshatch, word balloon, background and a dozen other elements are examined for their weight, placement and significance for maximum effect within the three or four panels.

Both deHaven and Alder agree the book's essays are witty, and at times the antithesis of scholarly work. "[The authors] don't steer away from making fun of themselves and the absurdity of the idea that Nancy is this high-faluting thing," deHaven says. "But they bolster their case at the same time."

A significant part of the work is devoted to the characters themselves. "One cannot look at the totality of Nancy's life and draw any conclusions about what kind of person she is because her life was a gag a day," Alder says. And part of what makes the strip so timeless, if not topical, is the mystery surrounding the characters' personal lives. "Look at Sluggo," Karasik says. "He's semi-homeless and living in a junkyard, with no parental supervision."

Back in the 1930s and 40s it was not unusual to see parentless waifs roaming urban streets, but the absence of any parents or child protective services also reinforces the independence of the characters, according to Newgarden.

"Nancy and Sluggo are stuck in this twilight zone hamster wheel," he laughs. "They lived in the same world for decades and decades."

Newgarden and Karasik report the book has gotten a great response, is in its second printing already, and is being used across the country in comic arts curriculums.

"Nancy is a great preventive," Newgarden says. "It keeps you from making beginner mistakes, and is a really good to learn how to start being a cartoonist." S

"How to Read Nancy" will be held April 2 from 7 to 9 p.m. at the VCU James Branch Cabell Library, 901 Park Ave. The public is invited.