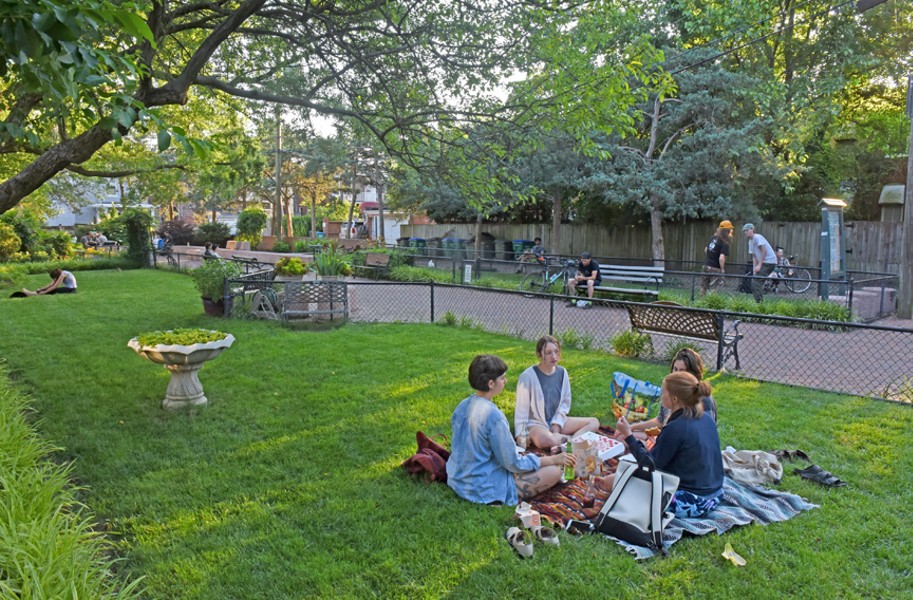 Scott Elmquist People enjoy Scuffletown Park on a recent weeknight in the Fan. After concerns were raised about over-regulating the urban oasis, the city says the main goal is for residents to respect the parks.

The president of a hidden neighborhood park in the Fan has stepped down after a debate broke out over its rules — and how strictly they should be enforced.

At the center of the disagreement is an urban oasis known as Scuffletown Park, tucked behind structures on the west side of the retail strip at Strawberry Street and Park Avenue. It's long been a low-key hangout, especially on summer evenings.

Public alcohol consumption without the proper permits is illegal, and it's a citywide rule that people must leave parks at sundown.

But visitors say police are frequently being called, and they want to know if certain rules are beyond legal scope.

Laura Blaylock was the park's president for seven years. But Enrichmond announced Liz Toms as the new park president May 3.

New rules soon were posted, including "stay off the grass" and "no sitting on fences or brick walls." Visitors also noted that a mural was removed.

"Death to yuppie scum," one said.

At times, mutual feelings of disgust appeared. On May 7, a user named Martha left a review on Scuffletown's Facebook page that said, "I mean I like Scuffletown. Hipsters need to go though."

Asked what a hipster is, she replied on the page, "a smelly person who usually wears tight jeans and flannel. They think they are cool, but really just cliché."

Online bystanders found both parties to be acting unconstructively.

Less than a month after being announced as park president, Toms has moved on.

"No, I am not the President of Scuffletown, nor involved in the park in any way," she emailed May 30 when asked about her work with the park.

Enrichmond, the city nonprofit that works to improve area parks, didn't return several calls for comment, and a Fan District Association member declined to speak on the matter.

Richmond's Parks, Recreation and Community Facilities Department is seeking to make peace by preserving quirky aspects of Scuffletown. Staff said there was a larger, ongoing effort to beautify Richmond's green spaces. And volunteer turnout for cleanup days remains strong, too, according to Enrichmond's newsletter.

To truly change or add park rules, you must go through City Hall, according to parks operations manager Marlie Smith. But "there are certain things that we work with community groups to maintain the parks," she says. "Not necessarily rules as much as requests from the community that aren't generally things that we enforce."

Smith says new signs were put up in Scuffletown in late May. These list park rules, the wording of which hasn't changed. Parks close at sunset and dogs must be leashed. There can be no glass, no fires, no digging, no camping, no drugs or alcohol. Also, no archery bows or slingshots.

"Each individual park doesn't have necessarily an individual set of rules, so to speak," she adds.

So what will become of the special events that make Scuffletown? Sundown at Scuffletown has been a popular acoustic music gathering on Tuesdays, and it's usually spread by word of mouth.

"The person who is doing it on Tuesdays — I've already talked to them, they're OK, there's no issues with that," the department's deputy director, Deborah Morton, says. "The only issue that we have with Scuffletown Park is people staying in the park after sunset. And there's no drinking in the park. Those are the issues that have been brought to my attention."

Morton said no one told her about the mural's removal. And she was unaware of who might be trying to ban people from sitting on the grass, she said.

"You know, we try to put as much money as we can as we get every year to help beautify our parks, so that people have a place to go," Morton says. "We just want people to respect the parks, so that everybody can use it." S