During the Civil War, advances in preserving the dead forever changed the funeral industry. 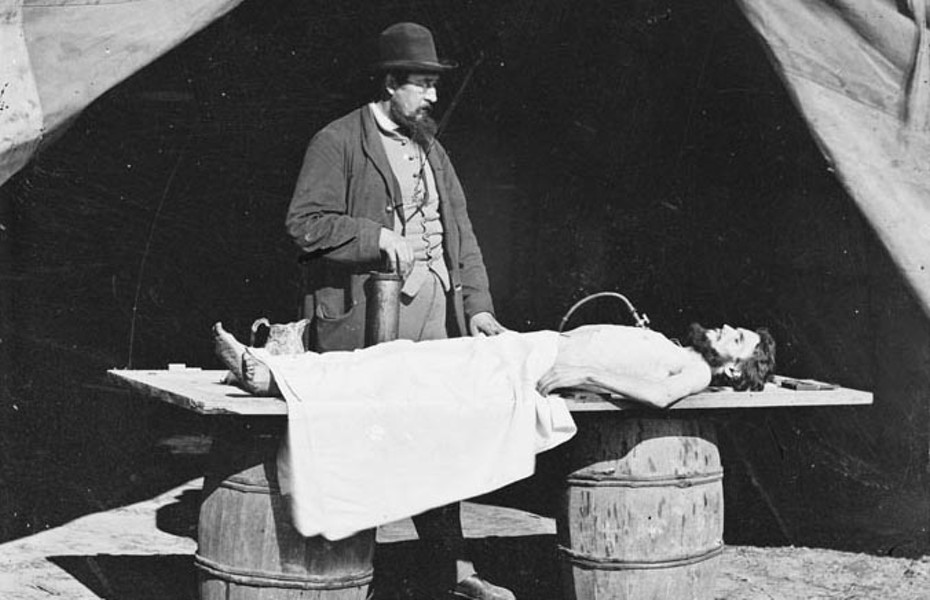 Library of Congress An embalming surgeon works on a soldier’s body during the Civil War in an unknown battle. After the war, embalming became widespread.

Virginia ratified the final decision to secede from the union on May 23, 1861.

Now, 150 years later, thoughts of the Civil War mostly concern the iconic battleground: smoke billowing from banked howitzers; lines of stoic youth squaring off; Confederate gray and Union blue, joined only in the fear and fact of death.

The battlefield, however, was equally as lethal in the moments after warfare. Slain soldiers posed a threat as real as bullets or cannonballs — the improper management of abandoned bodies invited disease, dishonor and a loss of morale.

Embalmment, the medical preservation of the dead, alleviated these terrible difficulties. Sharpened amidst the smoke and fire of battle, the process forever altered our nation’s perception of death, and remains one of the Civil War’s lasting contributions.

In “Rest in Peace: A Cultural History of Death in Twentieth Century America,” Gary Laderman writes that the Civil War “is the dramatic turning point in the history of embalming.”

The practice was popularized by Thomas H. Holmes, a New York doctor morbidly fascinated with death. “Dr. Holmes is credited as the father of modern embalming,” says Andrew Morehead, funeral director of Bennett Funeral Homes. “The majority of embalmers during the Civil War were protégés of his.”

Holmes pioneered modern embalming methods while studying at New York University (he was expelled for leaving a cadaver on a professor’s desk) and knew that putting the corpses on ice, which was the medical standard, provided only a short window of preservation. Families wanted to bring home their slain loved ones for proper burial, but the bodies decomposed too quickly. Holmes had a solution: an undisclosed chemical brew that he boasted would preserve bodies “forever, or at least as long as stone.”

Unrestricted by health and safety regulations, early embalming fluids were a deadly concoction of arsenic, creosote and mercury; this mix was more potent than many of the safer substances in common use today, Morehead says. Initially, medical colleges preserved cadavers with chemicals for teaching purposes.

Lacking any electrical means, field surgeons during the Civil War used hand pumps to inject embalming fluids into the decedent’s body at the neck, a process that could take hours.

Because of the prohibitive expenses of embalming, however, initial applications were reserved for families of officers and well-to-do soldiers. Furthermore, many people were concerned that this postmortem procedure disrespected the deceased.

These initial efforts popularized the technique, ensuring its future use nationwide. “The concept of embalming changed [during the war] from a taboo to something that was more commonplace and accepted,” Morehead says.

The technique advanced, too. Formaldehyde, commonly used in preservative fluids, was invented in 1866. More advanced systems of delivery, such as arterial injection, also were established during the war.

Without these wartime advances, embalming may never have become widely spread, says Richard Sikon, department chair of the funeral services allied health program at John Tyler Community College. While it started with the Civil War, Lincoln’s death was a turning point in the cultural acceptance of embalming. “We’re a very puritan society,” Sikon says. Flushing the deceased with chemicals was seen by some as a sacrilegious. But Lincoln’s rolling funeral turned the page. “For Lincoln to travel from city to city to be viewed, he had to be embalmed,” Sikon says.

In the 20th century, embalmment became an essential aspect of America’s funeral rites. It allowed families to connect and seek closure with lost loved ones in a way that hadn’t been possible before embalming became standard practice.

Sikon says embalming has come to indicate society’s values; funeral rites demonstrate how our culture — from clergy to politicians to zookeepers — faces death. “You could spend a lifetime looking at all the moral and [other] issues involved,” he says.

Scott Bass contributed to this story.