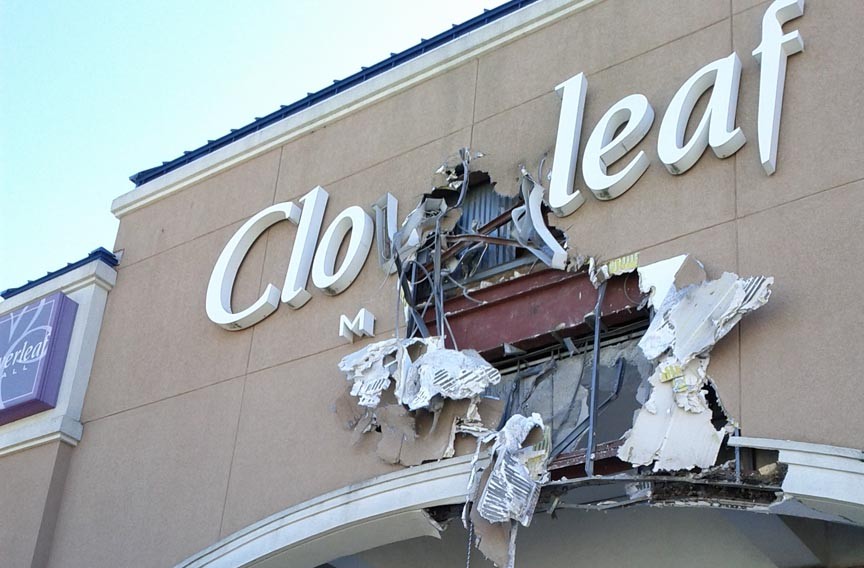 Only the kids from Monacan High School are spared. Taking a rare break from school to provide the entertainment, the teenage band members are able to fend off the zombies with their trombones and woodwinds.

Except for the flesh eaters, it’s a picture-perfect, sun-kissed morning, with temperatures in the upper 60s. Public officials are celebrating Cloverleaf Mall’s demolition, making way for a Wal-Mart-sized Kroger and hybrid residential and retail community known as Stonebridge.

State senators and delegates stop by for the party Oct. 25 in the mall’s parking lot. The entire Board of Supervisors, even outcast Marleen Durfee, gleefully take turns swinging a sledgehammer at a brick wall in front of the mall. The weapon comes in handy for County Administrator James Stegmaier, who takes out two of the blood gurglers — they are surprisingly swift — before succumbing to an undead mob. Councilman Doug Conner is here, along with Suzette Denslow, chief of staff to Mayor Dwight Jones. Dickie King, the former supervisor and country boy, serves up barbecue.

A crane takes a chunk out of the mall’s main entrance, and the cheers erupt. Art Warren, chairman of the Board of Supervisors, speaks of visiting the mall in the 1970s, when Cloverleaf was the region’s leading shopping destination.

“It’s with bittersweet feelings that we’re here,” Warren says, while a glorious sun warms the cracked asphalt. Moments later, a purple-veined arm reaches from underneath the makeshift stage and grabs his leg; immobilizing Warren while a half-dozen hungry fiends tackle him from behind.

After seven years of fits and starts, after the county spent $11 million acquiring the mall property, which consumes 83 acres at the eastern end of Midlothian Turnpike at Chippenham Parkway, most people have forgotten about the 200 acres behind it.

Access from Chippenham always has been a handicap. After exiting the parkway, shoppers must cross three lanes of highway in about 100 yards to the main entrance. Officials from Kroger, which is building a 123,000-square-foot grocery store on the property, the linchpin of the redevelopment, don’t seem to think access will be a problem. The store will be Kroger’s biggest in central Virginia, larger even than most of the big boxes near Chesterfield Towne Center, which siphoned many of the retailers away from Cloverleaf in the 1990s.

But they weren’t prepared for hundreds of walking dead, oozing with blackened blood. Tom Jacobson, director of community revitalization for the county, says he never understood why the mall didn’t incorporate better access to the property behind it, which would have attracted more retailers.

“There is 200 acres that’s forested behind here. It’s unbelievable. I have never seen any regional shopping center that had that much vacant land next to it,” says Jacobson, disappearing into a throng of dancing demons.