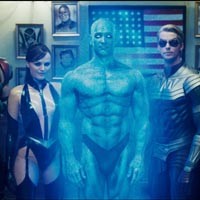 FEBRUARY 06
“Coraline”
For those who've ever dreamed there was a parallel universe in their home behind a secret door, or just that someone would make another “Nightmare Before Christmas”: the animated “Coraline,” based on Neil Gaiman's horror story for younger readers, stars Dakota Fanning as a little girl who finds alternate versions of her family and neighbors (Teri Hatcher, Ian MacShane and others) to be much more interesting.

“Fanboys”
Hollywood makes a movie about its primary audience, poking fun, probably gentle, at a group of “Star Wars” fanatics attempting to steal an early print of “The Phantom Menace.” Trailers make it out to be a standard road movie crossed with a smaller caliber version of the recent movie industry parody “Tropic Thunder.” But if it alienates its audience, who's going to talk about it for the next 25 years at conventions?

“The Pink Panther 2”
Does Steve Martin not have enough money yet? If only he could have passed the famous cartoon cat's top hat around rather than subject us to months of advertisements of him as French sleuth Clouseau in “The Pink Panther 2.” It's officially OK to boo the man for this. Jean Reno, John Cleese and Andy Garcia, too.

FEBRUARY 13
“The International”
A glimmer of February hope comes in the form of a thriller-heist picture starring Naomi Watts and the guy who should have been the next James Bond, Clive Owen. The movie may be timely, but just because the pair is set against the international banking system, don't get your hopes up too high for the next “Bonnie and Clyde.”

MARCH 06
“Watchmen”
Featuring an array of character actors in the lead roles, with Billy Crudup the closest thing to a household name, the star of this superhero flick is the graphic novel on which it's based, which is highly thought of enough to be taught in some university literature courses. Direction by Zack Snyder (“300”) suggests that if nothing else the printed page will be painstakingly if not slavishly transferred to the screen. Fanboys still stinging from “Fanboys” will comfort themselves by suckling at this one's spandex teat.

“All About Steve”
The most interesting thing about this romantic comedy is how little buzz it's generated, given Sandra Bullock makes her first appearance in two years as an eccentric who follows a CNN cameraman (Bradley Cooper) all over the country, hoping to bag a husband.

March 20
“Knowing”
The high-concept thriller returns with a Nicolas Cage vehicle about dire predictions coming true. Cage finds a mysterious piece of paper in a time capsule dug up at his son's elementary school that turns out to predict one catastrophic event after the other. The film conjures an array of current and timeless anxieties, including global disaster, airplane crashes and the hordes of disastrously conceived Nicolas Cage movies that have plagued moviegoers in recent years.

MAY 01
“X-Men Origins: Wolverine”
This prequel about the early days of Wolverine (Hugh Jackman) doesn't reveal how awkward it was in gym class, but how much butt Logan routinely kicked before being tamed by Professor X.

May 08
“Star Trek”
The new rule in Hollywood is that if the series is broke, fix it by starting over. With the “Star Trek” movie franchise having gone where no man longs to follow, it's J.J. Abrams' (“Lost”) job to boldly rewind to just before the original TV series. Young Kirk (Chris Pine), young Spock (Zachary Quinto) and young Uhura (Zoe Saldana) seek to prove that hotties in space is as winning a formula now as it was in 1966.

May 15
“Angels & Demons”
Its story precedes “The Da Vinci Code,” but this second Dan Brown adaptation stays true to the series by bringing back most of its major players, including director Ron Howard, producer Brian Grazer and star Tom Hanks. But will this one take place before the unholy haircut of “Da Vinci”? Ewan McGregor joins in the search for divine clues.

May 22
“Terminator Salvation”
Prequel-happy producers must have been initially disappointed to learn that “Terminator Origins” was pretty much impossible due to the premise of the first movie, but what luck: Going backward actually means the future for this series, and it's now up to Christian Bale as John Conner to lead what's left of humanity against the machines that wish to destroy them. To make the whole sequel-prequel-time travel thing more confusing, Anton Yelchin stars as the original film's hero, Kyle Reese.

JUNE 05
“Land of the Lost”
With Will Ferrell helping to re-create the old Sid and Marty Krofft dino universe as comedy, the hope is that unlike the original's slew of serious-but-low-budget chase sequences and pseudo-scientific mumbo jumbo, this version will be a side-splitting lampoon of same. Recent routine Ferrell fare suggests audiences may start cheering for the Sleestak to run a little faster this time.

June 12
“The Taking of Pelham 123”
Remake madness digs up a doozy in summer in the form of a near-forgotten action masterpiece from 1974. John Travolta and Denzel Washington take on the roles of a robber (Travolta) who leads the hijacking of a New York subway train and a streetwise cop (Washington) racing to stop him. Probably no repeat of Travolta's '70s-era threads or chest hair, though.