"It should be law enforcement, not me, trying to shame drivers into avoiding a surprising amount of death and injury." 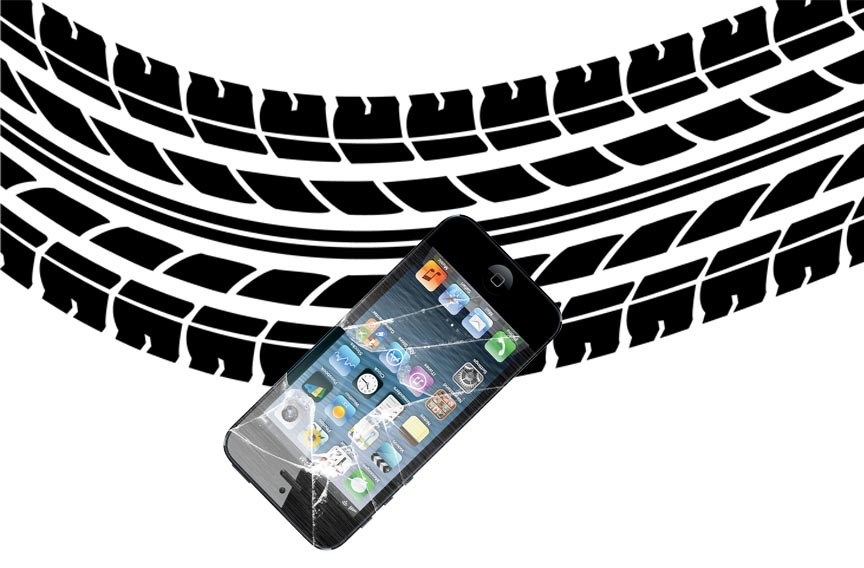 On Gaskins Road, in the rush-hour traffic of a Friday morning, I yell and point at a young woman. She has narrowly avoided a rear-end collision with the car in front of her, a sedan with a child seat in back. Meanwhile, the target of my outrage holds an iPhone against the front windshield pillar. I can see tiny images moving, and I've watched her for half a mile, weaving as her eyes flick between the road and a movie on her phone.

At a stoplight, I try to gently tap the horn when I pull up beside her. My horn instead blares. The driving moviegoer glances over at me in terror, understandably horrified by a pointing gray-bearded man of vaguely Middle-Eastern appearance, his eyes bulging. She looks away but her phone stays exactly where it is. I put on an idiotic face and pretend to be typing on an invisible smart phone, making myself ridiculous and making her speed away.

It should be law enforcement, not me, trying to shame such drivers into avoiding a surprising amount of death and injury. Though survey data vary on the matter, the U.S. Department of Transportation found that 16 percent of fatal accidents in 2009 involved a distracted driver. Of these fatalities, 18 percent "involved reports of a cell phone as a distraction." That amounted to nearly 1,000 deaths. The National Transportation Safety Board attributed more than 3,000 deaths in 2010 to distracted driving from all causes.

What distraction means can be slippery; I've nearly run off the road changing the station to escape the sedative of Garrison Keillor's radio show.

Without a federal law to stop this carnage, Virginia finally seems to be taking bipartisan action. A bill introduced by Delegate Ben Cline, R-Rockbridge, and Delegate Scott A. Surovell, D-Fairfax, would make texting while driving a primary offense, so police can pull over a driver without other cause. As a class-one misdemeanor, distracted driving would be considered reckless driving, thus subject to a possible $2,500 fine and a year in jail. Oddly, the governor has been lukewarm to this initiative. He needs to hear from residents and hear from them loudly that we need a specific law to protect the public from texting and tweeting drivers.

I'd prefer that legislators ban all but hands-free voice, and I'd love to see the federal government step in. Such rules would force automakers to simplify audio and other cabin controls with voice activation or the sorts of large dials that, on my old Honda, make adjusting the air conditioning or heat second nature. In-dash systems like BMWs iDrive and Ford's MyFord Touch are not meant to be used by anyone in motion.

I'd also require phone makers to install nonremovable features that would disable phones moving more than 20 miles per hour. The app could be turned off by passengers in a vehicle, but if a distracted driver got pulled over with it disabled, I'd make the penalties equivalent to those for drunken driving: a fine, license suspension and mandatory jail time on a first offense. Stomping on the phone by a cop would be optional, but I'd volunteer for that ride-along program in a heartbeat. We also need more of a culture of public shame. I would have snapped a picture of the woman I saw and sent it to police, but then I'd be distracted too, more likely to have my own car crash.

In time we may get fully autonomous cars that drive us to our destinations: Rube Goldberg's replacement for the excellent light rail network we foolishly tore up all over America, including Richmond, after World War II. While I doubt we'll get our trains back in this metro area, the law coming from the General Assembly will serve as a needed stopgap until the day comes when the self-harried and self-distracted can lie down on a mattress in the car, text and watch YouTube videos, post to Facebook, even eat breakfast in style as a vehicle whisks the "driver" to work.

The sooner that future arrives, the better. As someone who writes professionally about technology in learning, I have seen an ominous change for which we can blame the late Steve Jobs and Google's executives: the ubiquity of smart phones in the hands of the young, devices that make texting far easier than on my antediluvian flip phone. Parents want their offspring to be safe and always in touch. Ironically, that siren song of constant connection proves dangerous for young and old alike.

How did we get to this bizarre version of the future, where we need to be absent from the world of flesh and blood constantly? Our gateway drugs have been bulky desktop or laptop computers attached to high-speed networks. Thus the fate of the personal freedom trumpeted in advertisements for personal computers, as far back as the mid-1980s: the freedom to choose to wear chains.

Perhaps the young woman I tried to shame on Gaskins Road may never kill anyone. But I hope she soon has to go to court. Perhaps the General Assembly will pass a bill, and perhaps the governor will sign it, a first step in changing the habits of Virginia's drivers. S

Joe Essid teaches writing at the University of Richmond. Opinions expressed on the Back Page are those of the writer and not necessarily those of Style Weekly.