After a long absence, the hip-hop pioneers return to Richmond for Shadrock. 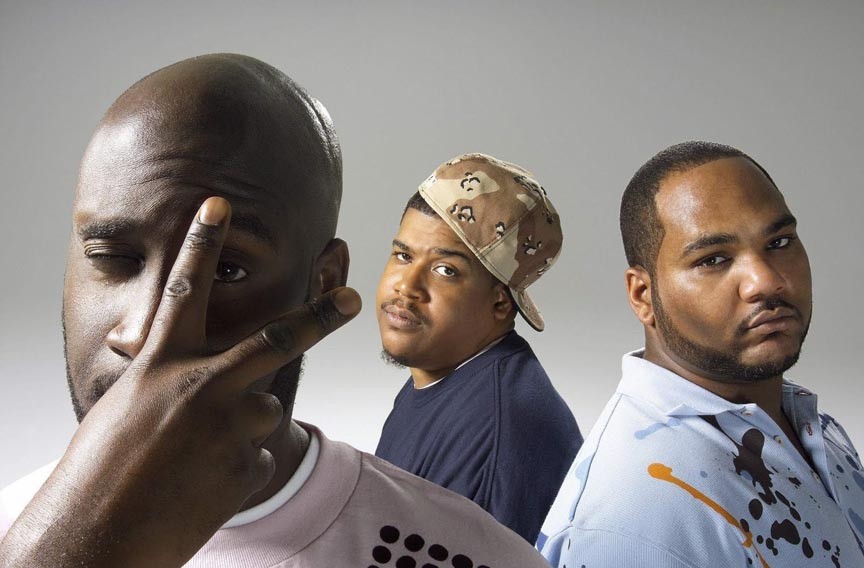 A few years ago, sweating summertime bullets at Baltimore's annual Artscape festival, I watched in slack-jawed awe while De La Soul — yes, the playful hip-hop trio behind the Daisy Age and "Me, Myself and I" — rocked the city's damn shorts off. It was one of the most memorable concerts, and definitely the best live hip-hop show, that I've ever attended.

At that point I'd enjoyed De La Soul through its sample-heavy albums, classic studio creations such as its 1989 debut, "3 Feet High and Rising," a hip-hop landmark recently placed in the U.S. National Recording Registry for its cultural and historic importance (Imagine: "Potholes in My Lawn" is protected for all eternity). But I had no idea that these guys with the lo-fi beats, goofy skits and off-kilter samples — Steely Dan, Johnny Cash, the Turtles? — also were masterful live entertainers.

For more than two decades, Posdnous (Kelvin Mercer), Dave (David Jude Jolicoeur) and Maseo (Vincent Mason) have surprised their audiences. The Long Island, N.Y., trio, as De La Soul, remains one of hip-hop's longest-running and consistently interesting forces. The Grammy-winning group also can boast being part of the Native Tongues collective, a loose series of performers (Jungle Brothers, a Tribe Called Quest and others) that changed the sound of hip-hop with genre-expanding collaborations and side projects.

De La Soul will headline the inaugural Shadrock Music Festival on April 28 on Brown's Island, the first time the group's performed in Richmond for nearly a decade. We recently talked with Posdnous about how De La builds its live show, what it takes to be a great MC, and why bandmate Maseo is absent on the group's new "First Serve" release.

Style: You guys are best known for your studio work but what does it take to translate that to the stage?

Posdnous: Honestly, it's being a student. And experience as well. The experience of succeeding, failing, seeing what does and doesn't work. Right off the bat we were thrown on this big tour with LL Cool J and Public Enemy, Slick Rick, NWA, and we learned a lot. We sat down with LL [and others] and they would say, "You did a good job but you need to look at the crowd, engage the audience," and as time went on, we took in this information. From that tour we went on the Fine Young Cannibals tour and then we played a lot overseas. All that has brought us now to be a group that knows how to read a crowd and present ourselves live.

You have a new album out, "Plug One & Plug Two Presents First Serve," but Maseo isn't on it. Is there trouble in De La land?

Everything is [fine]. How "First Serve" came about — we were touring the 20th anniversary of "3 Feet High" overseas, and Dave and I were approached by a pair of French DJs to do vocals on a project they were working on ... they didn't need a DJ. So, no, there's nothing wrong with De La Soul. We are working on two albums as we speak. 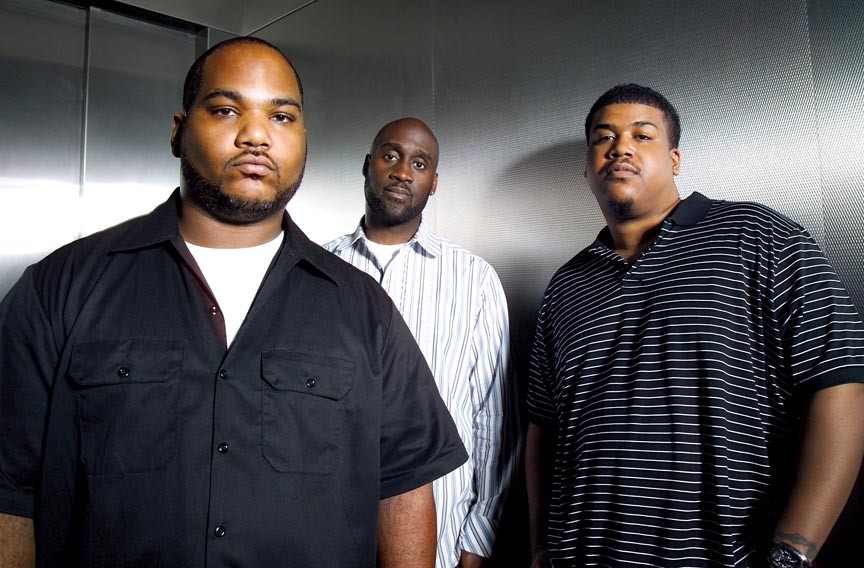 You guys must have been floored when "3 Feet High and Rising" was chosen for the U.S. National Recording Registry.

Amazing! That time in our lives was an amazing time. I was speaking with [the guys] about this. If someone came from outer space and wanted to sample our civilization's art and culture ... it's a part of that. We had so much fun making that album. We didn't have a plan to change the world. We were the 18-, 19-year-olds that we were.

It's been a series of peaks and valleys with hip-hop. In trying to be very fair and seeing where the music has gone and what it has been through, I do think that period of time was one of the highest. ... It allowed so many more people to be involved. When we and the other Native Tongues [groups] came into it, it was very creative. Right now we are at a time when the business end of it is very on-point, whereas back then a lot of great artists didn't benefit financially because they had terrible deals. A lot of artists today come in with the mindset of taking care of their business, which is good. Unfortunately, I think some of the creativity suffers because of it. There aren't as many people taking chances.

With the A Tribe Called Quest documentary, it seems like the Native Tongues groups are still on people’s minds.

Those are my brothers. And like any brothers and sisters, you can have your little squabbles and your disagreements as well as just growing. I mean, back then, we were all 17, 18 and now we’re in our late ‘30s, early ‘40’s. It’s just great to know that I can call Q-Tip now and bug out with him, or if I’m in L.A. or the Bay Area, I can see Phife… it’s not all about business. I know that if I can still speak to all of these Native Tongues [members] and they are a part of my life and my children get to know them, that means more to me than making records. But as a group of groups, we’ve all been on different journeys with our lives. So maybe two groups will want to get together and do something and maybe one group isn’t ready. But people need to realize that the Native Tongues wasn’t a group that broke up, it was a series of groups that got together. I would love to see [a new Native Tongues project] but it has to make sense.

It seems like everyone has a favorite De La Soul album. Everybody loves "3 Feet High…" but "Buhloone Mindstate," "Stakes is High," "The Grind Date," these albums also have fans.

The biggest thing for De La is that we’ve never worried about what an album is going to do commercially. Because we never came into this with that thought. We just want to stand back and say, ‘This is correct. We put our all into it and this is what came out of it.’ But there are different albums where I can stand back and listen and say, ‘You know, this is missing this, this could have that…

I was going to ask if you thought there were albums that didn’t quite get it.

I don’t want to say I have a least favorite ‘cause I’ve loved everything we’ve done but I would probably say "Buhloone Mindstate" is my least favorite. But one of my grooviest songs we’ve ever done is on that album, “I Am I Be.” What I wanted to say on that record got said and it holds true to what I felt and how I feel now. But I think the album is somehow incomplete. When I go from the beginning and get to the end, something’s missing. It’s probably the only album I feel that way about. It didn’t end the way I wanted. But that album is interesting because of what was happening around that time (1991), Tribe was really coming into their own, getting simple [and] beat-friendly, Wu-Tang was being introduced and Biggie [Smalls] was big. And we were still on our journey of being laid-back and introspective. So, in that regard, I love that album.

My favorite De La Soul disc is your second, "De La Soul Is Dead." When that came out, it wasn't received very well. Today it's considered a classic. Speak to that — creating something that seems to get better over time.

I think a lot of people were attached to what we gave them on the first album. With "De La Soul Is Dead," we were trying to say that dying takes you to another plane. What you knew of us, the hippies and the colorful things, is dead, but De La Soul still lives. We were growing and we were having fun. As many skits as we had on there, there were 20 to 30 more we couldn't put on the album [laughs]. One thing people should know is that a lot of the zany stuff on our first three albums was all [producer] Prince Paul. He's a funny guy. That is true to what he is. I was always the more serious one. Dave was very creative and Paul brought that silliness out in him, out in all of us, but I was always like: "Yo! I got this thing called 'Millie Pulled a Pistol.'" So, around "Stakes Is High" (1996), when Paul was not involved, [it was] a more serious album. Just like when we work with Damon Albarn [of Gorillaz], we are influenced that way. We are kind of like chameleons. We can morph and do whatever we need to do [when we collaborate].

People just love that song, “A Rollerskating Jam Named ‘Saturdays.’” Are you able to enjoy a song like that the way your fans do, or are you too involved in the process?

Honestly, that’s like one of my favorite songs [of ours]. It’s because of the memories I had making it. I mean, I can remember where I first purchased the album that had the sample (The Mighty Ryeders' "Evil Vibrations”). And me thinking, once I got the beat together, that yo! This could be a rollerskating deal. I just kept saying that to myself, thinking of when I was young growing up in the Bronx and we would go to Bear Mountain to go to the Rollerskating Rinks. I was sitting with Vinia Mojica [who sings on the track] and saying, ‘it has to be simple, almost like bubblegum corny but simple.’

It has the classic feel of old school dance songs like “Bounce Rock Skate Roll.”

Right. Like Vaughan Mason. Listening back to certain songs puts me back in the time of creating them. And the feel of it… I still love listening to “Saturdays.”

Your rapping skills are underrated. Talk about what makes a great MC.

Personally, I've never separated MC-ing from being a great writer. A lot of times MCs compare themselves to athletes but it's not the same. Michael Jordan is always going to be what he was but, physically, he can't do what he did back then. I think that a writer can always continually build up his mind, read different books, learn about different experiences and be vulnerable enough to open up parts of yourself that you can write about. I mean, if you are always stuck on writing about the streets and writing about money. ... There are only so many ways you can flip that.

Are there any MCs out now that inspire you?

There's not a lot but, off the top of my head, I can think of Kendrick Lamar. And even though people give him a hard time for some reason, I think Drake is an excellent writer. It may not be the topics you want to hear but. ... [laughs]. It's like with Public Enemy. Some people didn't like Chuck D. for pointing out all the stuff about the government and black empowerment. But they missed the point: Chuck D. was an amazing MC, an amazing writer! And I hope people get that from us. I don't want people to like De La just because we have fun. We have fun but we also write great rhymes. S

De La Soul will perform with Yo La Tengo, Dum Dum Girls, Shabazz Palaces, Kepone and more at the Shadrock Music Festival on Brown's Island on April 28. $35-$100. For tickets and information go to shadrockmusicfest.com.