Day of the Paparazzi

Richmond photographers revealed in the Best of 2008 Photo Show. 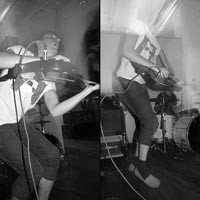 PJ Sykes is that one guy who's way up front at the show, snapping pictures. Sometimes he's right in front of you, and what his camera sees often seems better than what your own eyeballs reconstitute from the antics of the band at a venue. Sykes is a documenter of Richmond's music scene, and he's collecting the works of like-minded individuals for the Best of 2008 Photo Show. Two dozen Richmond photographers, including Kimberly Frost, Liza Kate, Jay Paul, Melissa Koch, Michael Otley, Curtis Patton and Sykes himself bring their own visions from the front of the show, or a forlorn storefront, or near a guy firing Roman candles from his crotch. Richmond photography: eclectic. The show runs Feb. 1-March 1 at Harrison Street Coffee Shop, 402 N. Harrison St., with an opening reception Saturday, Feb. 7, 6-9 p.m. at Harrison Street and Rumors Boutique. 359-8060. — Brandon Reynolds