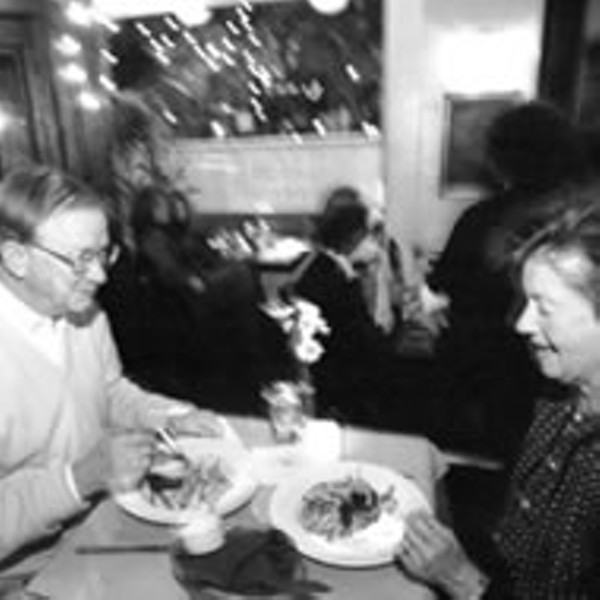 It's basically the same place it has been since 1987 — one of the most sophisticated little eateries in the Richmond area.

A handsome, romantic place housed in a 1910 brick building, it could be in Greenwich Village or on the North Side of Chicago. The 50-seat dining room features large windows, oversized mirrors, dark wood, a high, tin ceiling and antique fixtures. Diners sit at small tables and booths (the later a bit cramped for four) that are accented with fresh flowers.

Named for the streets that intersect outside, Davis & Main is a bar and grill, with the emphasis on the grill. It features classic American cuisine, prepared well and priced fairly.

Two of the three new owners, who took over in November, worked for former owner Mark Brandon — Ann Bloomsburg as a waitress and Robert Noland as manager. The third partner is the chef, Joey Cates.

The menu has changed only slightly. It still features the best grilled sandwiches in town. (Nearly everything on the menu, including the vegetables, is prepared on a grill in the tiny kitchen.)

The grilled chicken breast with bacon and cheese (choice of longhorn, Swiss or white cheddar) still spills over the oversized bun, as does the half-pound Black Angus burger with pineapple, bacon and cheese (each $8 including slaw and great fries).

This is a fine place for vegetarians. There is a new meatless sandwich, the "green" burger ($7), made of garden vegetables and cheeses, and a new entrée of grilled vegetables over rice with balsamic vinaigrette ($11), plus several meatless appetizers, including roasted garlic hummus ($7) with a number of dipping options, including apples, cucumbers, carrots, celery, radishes and toasted bread.

For meat-eaters, a great starter is the smoked trout and pork tenderloin with smoked cheddar and lingonberries ($7.50). Other appetizers include polenta cakes with feta and kalamata tapenade, warm goat cheese toasts, fried artichoke hearts stuffed with Swedish fontina cheese and chicken wings.

One challenge the new owners face is getting longtime customers like me to stray beyond the appetizers and sandwiches to the regular and special entrees.

Those who do will be rewarded.

A variety of crusts enhance several of the fish dishes. A Virginia-raised catfish ($14) is lightly coated in cornmeal and served with tarragon tartar sauce; salmon ($18) is encrusted with Cracker Jacks and given a mild fruity taste with cranberry-apple chutney, and a lemony rockfish ($18) is dipped in pecans.

Meat choices might include a crunchy New York strip ($19), which although fatty and gristly around the edges, was lifted above the ordinary with caramelized onions and mushroom; pork tenderloin ($16) with dried cherry-mustard hoisin, and a grilled porterhouse ($18) dressed with a mandarin Dijon sauce and a sweet pepper coulis.

All main courses come with a medley of vegetables, grilled to al- dente consistency, and a choice of potato or rice.

Desserts are locally made and ever-changing. If you are offered the flourless, Kuala-laced chocolate torte topped with black walnuts, take it and share.

While the new owners, ages 28 to 33, are being careful not to tamper with success, they are making a few gradual changes to attract a younger clientele.

They invested in a new sound system and added some alternative music, although the staple is still jazz and standards, and waitress-turned-proprietor Bloomsburg scrapped the old uniforms, which included distinctive suspenders, in favor of a less-regimented look that has resulted, in one instance, with a lip ring. ÿS

Don Baker has been reviewing restaurants since he retired as Richmond bureau chief for the Washington Post in '99. He has worked as a waiter and maitre-d' and has a dining Web site, diningpro.com. He last reviewed restaurants for Style in the late '80s.