David Shultz and the Skyline 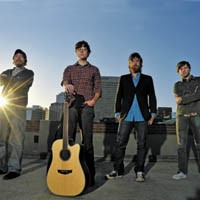 You can't get ahold of that David Shultz. He's just not around. He's delivering lab supplies somewhere. He's at Golden Corral eating ice cream. He's anywhere but around, and yet the music of David Shultz and the Skyline is everywhere.

It's regularly at The Camel; it was just at Capital Ale House. This July it'll be at FloydFest and in September it'll be at Bristol Rhythm and Roots. In between those two it'll be in a little farmhouse in southern Maine, recording a new album. It's getting to be everywhere because it's hard to skip over, which when Shultz, when he's finally around, admits is his plan.

"Part of the goal," he says over the phone while walking home from work, "is you want to make it easier to process, but include more depth at the same time." In other words, he says for this next album, a follow-up to last year's "Sinner's Gold" and his 2005 self-titled album, he wants to accomplish the simplest and hardest thing: a dozen songs "that I'll never get tired of hearing and I can't imagine anyone will want to skip over."

Shultz, 26, and the Skyline -- Curtis Patton, Marcus Shrock and Matt Morton — fill some essential space in local music, which is why they keep showing up in Richmond best-ofs and in real and hypothetical compilations of music. It's folk one minute, an ageless species of rock another — like Tom Petty or Paul Simon. You know, American music.

And like those two, Shultz is trying to find that one right sound that makes you an American Musician, and with two dozen songs to cart up to Maine to choose from for the new album, Shultz says he'll know the fit when he tries it on.

"I was trying to make my suit, like this thing I'm gonna wear," he says, "like my handsome outfit that I'm never gonna go wrong with. … So I need one of those albums before I can move on to stone-washed denim or something like that." In other words, before taking those risks that result in something terrible or sublime.

The band's fitting in Maine will be assisted this August by Sam Kassirer, keyboardist for Josh Ritter, who produced a Ritter album and one by Langhorne Slim, other favorites of Shultz.

"That's why I contacted Sam, 'cause I don't see why I shouldn't work with people who work with some of the people I listen to," he says.

He says a few more things, then his phone cuts off, as expected. And he's gone again. Oh well. If you can't catch up with him, the music of David Shultz and the Skyline, at least, is easy enough to find.