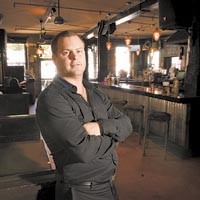 Empire building isn't for the timid, and in the hospitality industry it takes a tough hide to deal with the critics and naysayers. So when restaurateur David Bess keeps expanding his business, he's aware that competitors might hope he fails.

What's different about Bess is that his closest competitors also are his allies. Jared Golden, whose restaurant dynasty with Michelle Williams is one of the city's most vibrant, acts as a mentor to Bess, helping him sort through the stresses that can befall anyone who employs 100 people in tough times. Bess operates Cha Cha's Cantina, Lucky Buddha and Verbena, and has more restaurants in the works. He has been called a force to be reckoned with — and that's meant as a compliment.

Bess wants Shockoe Slip to be known for more than its watering holes, and he's convinced his neighboring businesses to help develop a fuller, friendlier profile for the district. They've started a monthly benefit for local nonprofit groups such as Toys for Tots and the SPCA, and plan a St. Patrick's parade and other family events to highlight the businesses, historic beauty and significance of that cobblestone section of downtown. Bess, who was 8 when his father died of cancer, also gives back to the Cancer Society.

As for the bumps and bruises that come to those who run restaurants for a living, Bess says it comes with the territory, as does the creative satisfaction. As he puts it, “I could never see myself behind a desk.”