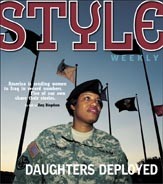 Before this war in Iraq, the idea of women fighting in the military was all but unthinkable. Now they're serving in record numbers -- 180,204 have been deployed in Iraq and Afghanistan according to a Pentagon spokesman.

Yet there's little discussion in the media about their daily lives, says Laura Browder, a professor of English at Virginia Commonwealth University. She's been working on a book of interviews with female soldiers and says that Lynndie England and Jessica Lynch — portrayed as a villain and a victim, respectively — are the only women that have come to the public's attention during the war.

"I think that the thing to stress is that women really consider themselves professional soldiers just like men, that they really look forward to going to a combat zone, just as they've been trained to do," Browder says. "The popular perception that they're not 'real soldiers' just doesn't match with their experiences."

Female troops are kept out of combat on paper, but this military engagement is fought block by block, village by village, blurring the frontline. The women serving in Iraq are daughters, mothers, aunts, police officers, marines, journalists, lawyers. They experience mortars and gunfire. They hold prisoners at gunpoint. They get baptized in Saddam Hussein's pool.

Style asked five of those women to share their stories.