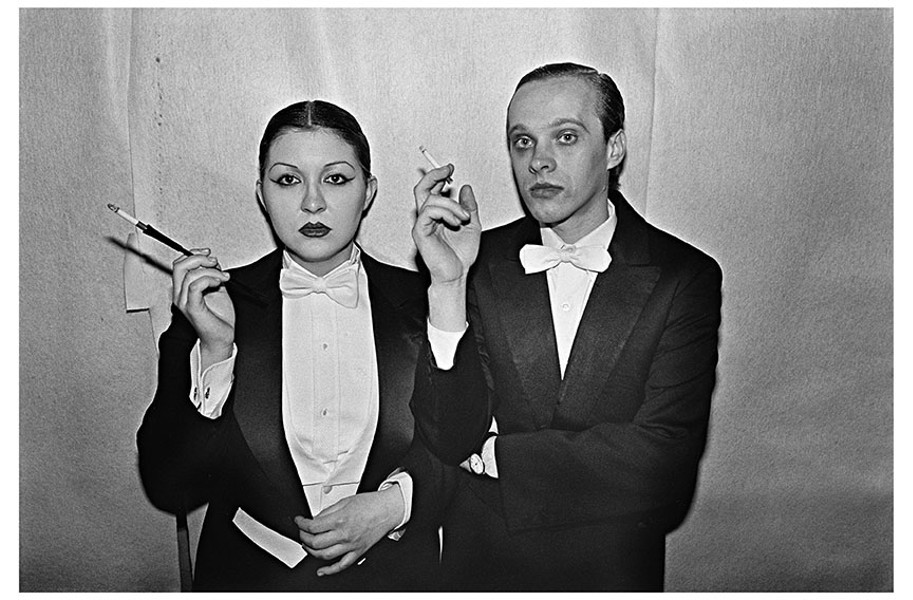 What attracted portrait photographer Bill Bernstein to photographing club culture in New York in the late 1970s was the diversity of the crowd, the freedom of expression and the judgment-free attitude of its denizens.

As a photographer, Bernstein found the mix of cultures and the freedom of expression to be both visually exciting and new.

“I found myself more interested in the people of the night — the real clubgoers — than the celebrities at the clubs. These people lived to party the night away.”

Bernstein recalls that era as a period of great strides being made culturally because of the LBGT movement — which began after the Stonewall uprising — the women’s movement and the civil rights movement. And because the late ‘70s predated the arrival of AIDS, the clubs were very open sexually.

“The disco was the perfect place for all of these subcultures and marginalized cultures to celebrate their newfound success and freedom,” Bernstein says. “Disco music was all about celebration and getting up off of your seat and dancing the night away.”

Bernstein is one of six established and emerging photographers featured in Candela Books and Gallery’s fascinating new exhibition, “Bring a Date,” which celebrates nightlife and music from the mid-’70s through today, all in glorious black and white. Spanning five decades, the exhibition highlights transformative moments in music and artistic movements, with an eye toward the kind of events that could be considered date nights.

In addition to Bernstein’s “Disco” series of the legendary Studio 54 club culture, there are Michael Abramson’s photographs of people dancing, talking and flirting in bars on the south side of Chicago in the mid-1970s, done when he was a graduate student, yet still among the photographer’s favorite works. Closer to home, Thurston Howes’ photographs document punk rock from the 1980s and ’90s in Richmond with youthful images of Gwar’s Dave Brockie and the ageless Henry Rollins, both performing and glaring at the camera.

“Bring a Date” continues into the 21st century with Jessica Lehrman’s video portraits of people skate dancing in an underground Brooklyn roller disco, which will be projected onto the front window of the gallery, including at night. Street photographer Reuben Radding’s “Humans Against Music” images show a series of impassioned karaoke performers giving it everything they’ve got. Safi Alia Shabaik’s intimate photographs of burlesque performers span moments on and off stage.

Candela founder and director Gordon Stettinius says the show came together after he first saw Abramson’s work. The challenge was finding a theme because clubs and dancing seemed too narrow once the gallery began adding other artists. He and director Ashby Nickerson decided to focus on entertainment and night-life photography. “These images are electric,” he says. “These people are having a good time.”

Stettinius also points out that the gallery’s shows often focus on current, process-based photography. “We don’t show a ton of vintage work,” he says. “So we decided for this show to use photographers who use cameras authentically.”

While Los Angeles photographer Safi Alia Shabaik lived in New York, she did a stint as fashion stylist, photographic documentarian, personal assistant and travel companion to the legendary Grace Jones. Her neo-burlesque works in “Bring a Date” are part of a larger body of work about subculture entitled “Vespertine Beings,” begun four years ago because of Shabaik’s interest in people who live outside the norm. She was intrigued by how they use external creative expression — costumes, performance, body modification and alter egos — to reveal their raw selves, foster acceptance and build community.

Shabaik also sees the work as an exploration of women’s roles on the fringes of society.

“I’ve always been drawn to anomalies and find true beauty in difference, uniqueness and what some consider flaws,” she explains. “I’m in awe of the creativity of these individuals and hope that my work shines a beautiful light on their gifts to society.”

With a gallery full of images of people in pleasure mode, Stettinius sees it an offbeat holiday show. For millennial viewers, it’s an up close look at several eras that are better described in images than words. And for fans of a particular photographer on exhibit, works from several of the artists’ portfolios will be available for sale.

In many ways, “Bring a Date” is a visual cultural history lesson. Although Bernstein didn’t participate in the wildness going on when he was shooting, he does recall being fascinated by the feeling of inclusion at the clubs. “It was the mix of people openly sharing the dance floor and having a great time,” he says. “I believe that this was a microcosm of what the world could look like if we let it.”