"The Producers" is a peppy but puzzling holiday choice. 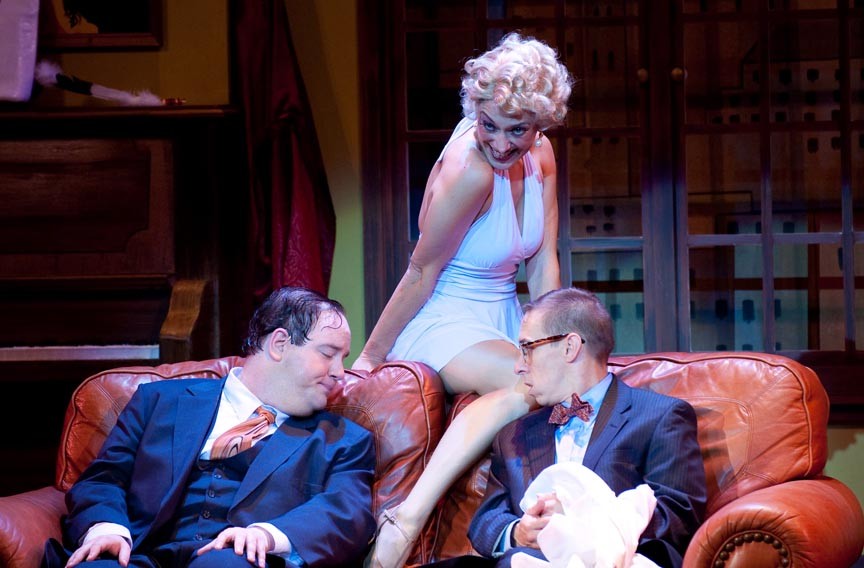 While Virginia Repertory Theatre's splashy musical "The Producers" is all slapstick and silliness on the surface, there's something bleak underneath — and I'm not just talking about the Nazis. The production is loaded with laughs, it looks great thanks to a team of top-notch designers, and it has a pep to its step because of exceptional work by director and choreographer Patti D'Beck.

It also benefits from the performances of two of Richmond's favorite sons, Jason Marks and Scott Wichmann. Both have great comic chops with super singing voices, and they're assisted by Rachel Abrams, who complemented Wichmann so well in last year's production of "Dirty Rotten Scoundrels."

The "Scoundrels" reference is pertinent because, while that show ostensibly was about two bad men, it essentially was about love. In contrast, "The Producers," based on the classic 1969 Mel Brooks film, is just a story of two bad men. One, Max Bialystock (played by Marks), is a veteran Broadway producer who's fallen on hard times. The other is Max's nebbish accountant, Leo Bloom (Wichmann), who concocts a scheme to make a bundle of cash by producing a surefire flop. They assemble a ragtag group of unknowing accomplices, such as the unhinged Nazi adherent (Jody Ashworth) who writes a dreadful musical called "Springtime for Hitler," and the transvestite director, Roger De Bris (Michael Hawke), who steps in at the last minute to play the Führer.

There's much to revel in: Freed from his usual leading-man roles, Ashworth is delightful, his deep voice and stocky frame lending comic contrast to his character's kookiness. D'Beck orchestrates incredible ensemble scenes, the chorus of walkers being the best. And De Bris and his coterie of hangers-on are a hoot.

But the original movie had a darkness to it powered by Zero Mostel's portrayal of Bialystock as a model of predatory desperation. In the musical, everything tasteless is tossed off with a song and a laugh, so while there are no good guys, there aren't any bad ones either. Marks delivers a line that exemplifies the show's empty heart — "Who do you have to fuck to get a break in this town?" — with as much cheerful faux angst as he would if this was "Hello, Dolly!"

Which I expect is the point. "The Producers" so earnestly tries to be a big happy show that its characters can't really embrace their own darkness. "Producers" has all the elements of a crowd pleaser but it would be better if it didn't seem so eager to please. S