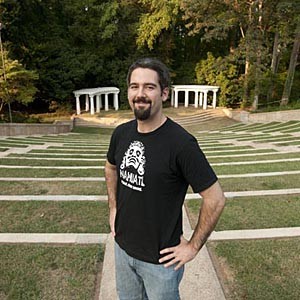 In a medium where gaining visibility can be a struggle, Daniel CustA3dio stands out for his love of the craft.

An accomplished and published poet, the trilingual CustA3dio travels the country performing in poetry slams and teaching creative writing workshops. When not onstage he works at the Richmond Public Schools Arts and Humanities Center as its poet in residence.

His skills in slam poetry have earned him accolades and a high ranking among poets, but it's his work with area schoolchildren and the impoverished that makes him a star.

Last year CustA3dio, through tireless fundraising and creative efforts in association with Gallery5, helped raise money for a year's worth of food for a single mother and her two children. In addition to giving proceeds from his spoken word performances to people in need, he's also donated space and helped to create poetry fundraisers for organizations such as Prevent Child Abuse Virginia and the Peter Paul Development Center.

During his time as poet in residence with Richmond he's created and inspired a whole new community of young poets at Elkhardt Middle School. He also gives special focus to the school system's non-English speaking pupils, helping them to open up and to better assimilate to American culture.

Fellow teacher Eugenia Yeuell writes that while being sensitive to the self-consciousness that middle-schoolers face, CustA3dio offers instruction that “calls for students to jettison out of their comfort zones and expose themselves.”

Another teacher, Dorothy Rice, describes CustA3dio as “humble, gracious and poised, but underneath all of it is a fire! He is a man who is passionate about life.”

A manly poet with a heart of gold. We're getting all flustered over here.