Concert in Sweden is singer's biggest showing in more than a decade. 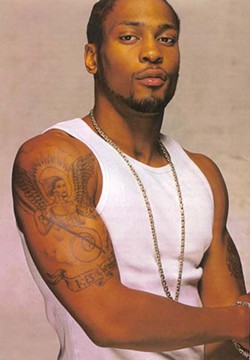 After 12 years of setbacks, bad decisions and false starts, R&B singer and Richmond native D'Angelo returned to the stage in Stockholm, Sweden, Thursday night, performing a well-received set at the Filadelfiakyrkan venue.

The 36-year-old performer seems to have shed the weight he gained during his lengthy hiatus and found his swagger again. “It definitely gave me a boost, I'll tell you that,” says Marlon Cox, the singer's cousin who's accompanied him on tours. “It was real refreshing. … I can't wait to hear his album."

D'Angelo offered the crowd a taste of his still-untitled third record -- more than a decade in the making -- performing two new songs, “The Charade” and “Sugar Daddy.” D'Angelo's efforts have been delayed by, among other things, an auto accident and several brushes with the law, including one for drug possession and another for solicitation.

No U.S. dates are set for D'Angelo's mini tour, which will reportedly include 10 more shows overseas. He will perform on Sunday in Paris and next week in London