Dancing For Its Own Sake 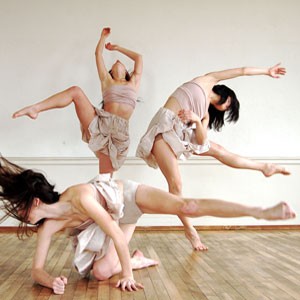 Any event that gets new work by contemporary choreographers on the stage deserves a thumbs-up. For nine years, Starr Foster Dance Project's Choreographers Showcase has been doing just this for local and out-of-town artists. Last weekend, 10 new works by choreographers from Richmond, Charlottesville, Norfolk, San Jose, Calif., and Brooklyn, N.Y., took the stage at the Grace Street Theater.

The program opened with “Hunter,” a solo by San Jose-based Dalia Rawson of the Rawson Project. Dancer Mads Erikson's long lines and technical precision delighted the eye despite choreography that evoked ballet class exercises more than “an imaginary world of numbers, patterns, and symbols” as the program note indicated.

Several other works felt hampered by the conflict between expressing a concept, and dancing for its own sake. “Interrogation,” choreographed by Brittany Whitmoyer of Bnw:dance opened with dancers writhing in front of spotlights which they then picked up and used to isolate each other. But only moments of the piece seemed aligned with the idea of interrogation, interspersed with dynamic dance sequences that might have functioned better outside a framework that felt pasted on. Similarly, “Aqueous,” choreographed and performed by Charlottesville Ballet's Ty Cooper and Emily Mott, featured the two of them dancing gorgeously to an overwrought score by the Michael Nyman Band, but lacked a consistent emotional or narrative line. They danced in unison, danced together, danced apart, but the motivations behind these shifts remained unclear.

“Kouder,” choreographed by Kyoko Ruch, succeeded in combining dance, music, costumes and lighting to evoke a mesmerizing world in which three women with wild hair and short, ruched skirts circled each other, broke apart into wild spins moving in and out of the floor, crept slowly over each other, or jumped up wildly with bared throats. They seemed at times desperate, trapped -- and we didn't need to know why or by whom or even whether they might escape, to feel completely drawn into the dance as a whole.

New York-based dancer and choreographer Samantha Speis offered an excerpt from her solo “Blind Visions” in which she appeared driven by deep anger or pain to spin madly, fling herself to the floor repeatedly, to tear across the stage and then stop suddenly in moments of fraught stillness, then smoothing her dress frantically with her hands. A second section with sudden video projected behind, of the dancer on a carousel ride, as she danced extended the idea but felt almost like a separate dance.

Felix Cruz and Melodie Fais offered “Match,” a duet that walked the line between playful and combative, with engaging and unexpected partnering, such as one sitting astride the other's neck. Amanda Kinzer and Megan Thompson performed “Gyro” in front of two percussionists pounding out a phenomenal, driving score by Tomer Yariv. The somewhat static dancing, however, could not hold a candle to the lively immediacy and naturalism of the drummers' performance.

The program closed with “Broken,” a premiere by Starr Foster for five women whose deliberate movements, lines and circular formations felt ritualistic and often ominous.