Richmond Ballet steps out to Israel with Minds in Motion. 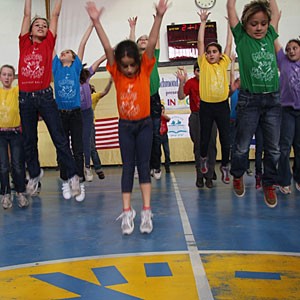 Sheket bevakasha is the nice way of saying “be quiet” in Hebrew.

It was one of the first phrases picked up by Richmond Ballet's Minds in Motion director Brett Bonda and instructing artist Katherine Smothers while teaching a dance to fourth- and fifth-graders in the Emek Hefer region of Israel in January. “We said sheket bevakasha a lot,” Bonda says. “It was the best phrase we learned.”

This was the second residency at the Beit Yitzhak Regional School for the ballet's Minds in Motion team. The program was so successful last year that Bonda and Smothers were asked to return. “In a two-week period, Brett and Katherine succeeded in giving 200 students a feeling of pride, confidence in their abilities, and a big smile on their face,” says Vivian Garber, principal of the school. “There was a strong sense of teamwork that was created by the magical personalities of Brett and Katherine. This program contributed immensely to our student body.”

Fourth-grader Gilad Mayer seems to agree. “We had lots of fun and we became friends with Brett and Katherine,” Mayer says. “They are very funny and nice.”

Minds in Motion was founded 16 years ago when Stoner Winslett, the artistic director of Richmond Ballet, decided to offer an outreach program to the children of the community. Modeled on the program founded by former New York City Ballet principal dancer Jacques d' Amboise, Minds in Motion teachers visit Richmond metropolitan schools, teaching classes to fourth-graders once a week.

“This is all about building the confidence of the students through movement. It's not a dance program. It's about transforming the kids,” says Bonda, a former Richmond Ballet company dancer. “Everyone is capable of doing the type of movement that we are doing. The objective is teaching the children discipline, dedication and self-awareness through simple dance moves.”

Minds in Motion is a program in which children of all abilities can participate. “It's our job to really invigorate their spirit and do it through humor, so it's a very positive experience,” says Smothers, also a former company dancer. “We always say we don't care if you mess up, it's how you deal with it. So they get that positive vibe so they aren't afraid to fail because we aren't going to give up on them.”

Minds in Motion ended up in Israel through happy coincidence. Or as Matt Langsam, assistant executive director of the Jewish Community Federation says, “It's almost like all the planets lined up.”

A few years ago, Ralph Robbins, executive director of the Virginia Israel Advisory Board, had a businessman from Israel visiting Richmond whose daughter was a semiprofessional ballet dancer. Robbins took his client to the Richmond Ballet where he say the Minds in Motion program, Langsam says, and “thought it was wonderful and wanted to bring it to Israel.”

The man happened to live in Emek Hefer, already connected to Richmond through the Jewish Community Federation's Partnership 2000 program, which facilitates exchanges between the two communities. The first year, the Minds in Motion residency in Israel was funded by Partnership 2000. This year the municipality of Emek Hefer paid for it. “They loved the program,” Bonda says, “but we didn't know if we'd be asked back or not; then they contacted us and said, no, no, you're coming back.”

“There were a lot of unknowns going to Israel the first time,” Smothers says, “but teaching the kids was not one of them. We figured we can teach them. You don't have to explain anything. They just get it.”

Whether Minds in Motion is in Richmond or Emek Hefer, the final show performed by the children is emotional for the adults. “You're there with parents and families from all different parts of the city,” Bonda says of the Richmond performance, which takes place each May at the Arthur Ashe Center. “They're all there because their kids are onstage. You really do tear up.” It was no different in Emek Hefer. “There were tough guys crying.”

At the final performance in Israel, someone from an Arab school who attended expressed an interest in having Minds in Motion come to its school next year. “The people over there are excited to bring together the different communities,” Smothers says. “The same thing happens here. When we have our final show in Richmond, you have kids from all over the city performing and it bridges gaps. When people experience things together, there's understanding.”

“I would have never thought I'd be doing what I am now when I was dancing,” Bonda says.

“And my plan when I retired from dancing was to go to law school,” Smothers says, laughing as Bonda smiles and shakes his head.  S

For information, go to http://www.richmondballet.com.