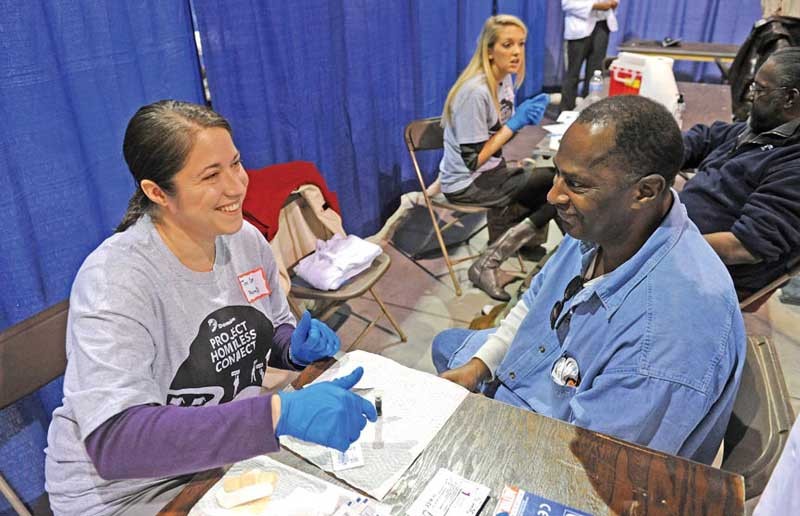 His blood was deadly sweet.

The man had blood-sugar levels of more than 500, more than four times the norm. His diabetes, wildly out of control, sent him to the emergency room every other week for related complications.

The problem was his homelessness. And if controlling diabetes is difficult when you have health insurance, regular meals, and a refrigerator for your insulin, it’s almost impossible when you live on the streets.

Many of the patients are terrified of diabetes. They think they’ll get their feet amputated (diabetes can damage circulation) or that taking insulin means they’re already near death.

So Stevens and Dr. Kelly Goode, a pharmacist, teach their diabetic patients — a little more than 40 so far — that they can control their condition. The man with the 500-plus blood sugar measurement started using insulin regularly. When his sugar dropped to 123, he was amazed by how good he felt. “Doctor, I think I’m high,” he joked.

Stevens and a team of medical students from Virginia Commonwealth University sought diabetic and pre-diabetic people last Thursday among the hundreds who attended the city’s annual Homeless Connect event. They use four-minute blood-test kits, because with a nomadic population, immediate results are key.

James Ragland, 50, submits his finger to VCU pharmacy resident Toni Coe for the test. His number is 6.4, which means he’s at risk for developing diabetes.

Stevens tells Ragland that he needs to be careful with what he eats, that he should choose things such as whole-grain bread and brown rice. Easier said than done.

Ragland is living in a transitional program called Second Chance Supportive Services, he says, where the food is donated and choices are limited. He used to work as a hotel chef, but for the last eight years he’s been incarcerated. “I’m all messed up,” he says. “I’m surprised I don’t have diabetes, coming out of prison.”

After testing 61 people, Stevens and her team find nine diabetics. One, she says, had no idea he had the disease.